Lionel Messi #10 of Argentina celebrates his goal with teammate Joaquin Correa #16 in the second half against Jamaica at Red Bull Arena on Sept. 27, 2022, in Harrison, N.J.
Photographer: Elsa/Getty Images

The sports industry, and soccer in particular, moves billions of dollars around the world. Soccer’s global importance, plus recent moves by multinational enterprises into the industry, may bring closer attention from tax authorities, says Cristian Faundez of KPMG LLP.

What do these recent soccer—or football outside of the US—transfers have in common? All were negotiated between independent entities at market conditions.

The sports industry, and soccer in particular, moves billions of dollars around the world. The International Federation of Association Football claims in its Global Transfer Market Report 2020 that soccer is the world’s largest international employment market, with more than 15,000 professionals moving across countries and generating transfers that reached $5.6 billion in 2020.

Multinational Enterprises in the Soccer Industry

Negotiations between unrelated teams, oftentimes rivals, historically were the most common way to negotiate and transfer players within the soccer world. But this situation is changing.

During the last decade, some sports conglomerates have been becoming more important—not only for the titles they have brought to the fans of the teams they have acquired, but also for the way in which they conduct businesses within the industry. MNEs have been acquiring soccer teams around the world, some of them in the same league and others in different countries or jurisdictions.

Why is this relevant? As a result of this new situation, in which an MNE owns a team in a specific country and sells a player or licenses a jersey or a shield design to another team owned by the same MNE in a different jurisdiction, transfer pricing rules must be considered.

As the Organization for Economic Cooperation and Development states in its Transfer Pricing Guidelines for Multinational Enterprises and Tax Administrations, when independent enterprises transact with each other, the conditions of their commercial and financial relations ordinarily are determined by market forces. When associated enterprises transact with each other, their commercial and financial relations may not be directly affected by external market forces in the same way, since there are not opposing economic incentives, although associated enterprises often seek to replicate the dynamics of market forces in their transactions with each other by their own or by following imposed guidelines.

Paragraph 1 of Article 9 of the OECD’s Model Tax Convention contains the authoritative statement of the arm’s length principle. It establishes that “where conditions are made or imposed between the two associated enterprises in their commercial or financial relations which differ from those which would be made between independent enterprises, then any profits which would, but for those conditions, have accrued to one of the enterprises, but, by reason of those conditions, have not so accrued, may be included in the profits of that enterprise and taxed accordingly.”

The OECD guidelines acknowledge that the arm’s length principle works effectively in most cases. This includes cases involving the purchase and sale of commodities and the lending of money where the arm’s length price may be readily found in a comparable transaction undertaken by comparable independent enterprises under comparable circumstances. It also includes cases in which a relevant comparison of transactions can be made at the level of financial indicators such as mark-up on costs, gross margin, or net profit indicators. However, the OECD guidelines also recognize there are instances in which the arm’s length is difficult and complicated to apply, such as when it’s challenging to obtain adequate information to price transactions.

The guidelines note that the arm’s length principle usually requires taxpayers and tax administrations to evaluate uncontrolled transactions and the business activities of independent enterprises. To compare these with the transactions and activities of associated enterprises, it can require a substantial amount of data. Additionally, some information (if it exists) may be difficult to obtain for reasons of its geographical location or confidentiality concerns, or it may be not comparable.

An MNE may own a primary soccer club that is successful in a specific league and creates a large network of supporters around the world that identify with the team’s colors. This success and identification can be shared with related parties in other jurisdictions through similar jerseys, shields, and brand names, using the same colors and letting the world know they are part of the same successful sport group. All of this intangible property being transferred from one jurisdiction to another creates transfer pricing issues.

Although the transfer of the intangible property mentioned above is an important topic, this article is focused on an even more complex intercompany transaction occurring between MNEs within the soccer market: transfer of players.

Part of the business in the soccer market is not only to win championships and get teams recognized around the world, but also to develop players and sell them to other teams that are either related or unrelated. A soccer player can be a club’s most important asset, so determining a transaction price is critical.

What is actually paid in a soccer player transfer? In addition to the salary and bonuses to be paid to the transferred player by the new club, if this player is under contract, the club wishing to secure their services is usually expected to pay a compensation to the former team, known in FIFA’s terms as a transfer fee. The transfer fee is the amount the buying club pays to the selling club as compensation for the selling club losing the player and their services. This fee considers factors including the perceived quality of a player, age, nationality, medical history, current contract length, commercial value, and potential worth, among others. In some cases, clubs might offer another player in exchange for the one they are attempting to buy, perhaps in combination with money. 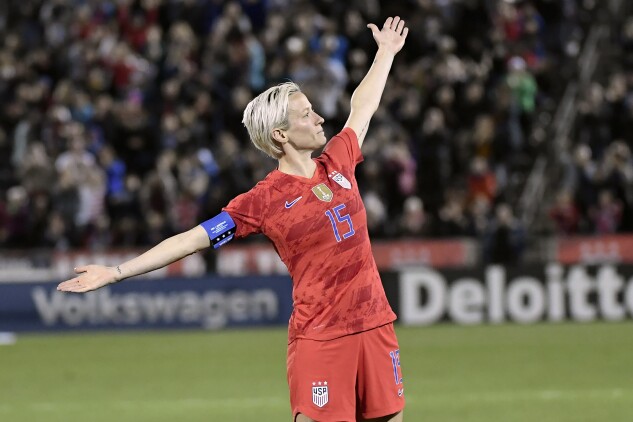 US forward Megan Rapinoe celebrates after scoring a goal against Australia during the women’s international friendly football match between the US and Australia at Dick’s Sporting Goods Park in Commerce City, Colo., on April 4, 2019.
Photographer: Jason Connolly/AFP via Getty Images

As stated above, the challenge in obtaining adequate information is one the cases where the arm’s length is difficult and complicated to apply. Because all transfers are carried out via private contracts, gathering comparable information is a difficult, but not impossible, task to achieve.

FIFA’s Legal & Compliance Division oversees running and administrating the Transfer Matching System, an online system in which all teams affiliated with FIFA must register every international player transfer between clubs. This register is not publicly available, but FIFA issues an annual report that highlights trends and the most relevant transfers during the season. This report can be used as a reference for player valuation.

In general terms, players can be valued in the same manner as any other asset. The market approach, which is based on historical market prices realized between third parties, seems to be the most reliable approach to valuate a team sport player. Key factors include the player’s age, playing position, nationality, playing characteristics, weighted performance criteria, and social media presence. Similarities can then be drawn with comparable players for whom transactions have already taken place in the market. The individual’s circumstances (such as long-term injury) also must be considered to determine either discounts or surcharges, as well as the probability of the club being able to transfer the player.

There is a handful of public and collaborative platforms that are often used by journalists, soccer agents, and clubs, in which transfer amounts and player value estimates are shown. They’re based primarily on press releases, social media posts, and rumors. Although these public platforms may be useful as a reference, they may be also inaccurate because anyone can change data in the databases at their convenience. These deficiencies complicate the transfer pricing analysis from reaching a reliable result.

However, some advisers have developed niche competencies in this area and offer business valuations services to value soccer players, soccer teams, and competitions, with results that are also useful for a transfer pricing analysis.

Although player valuation has not been a main area of focus for tax advisers, and transfer pricing implications of player transfers have received even less consideration, the global importance of soccer combined with the recent MNE move into the industry may bring closer attention from tax authorities. Indeed, tax authorities may initiate specific audits and requests for transfer pricing analyses to support transfer of players, among other transactions, between related parties that may trigger considerable a tax burden if MNEs are not adequately prepared.

This article does not necessarily reflect the opinion of Bloomberg Industry Group, Inc., the publisher of Bloomberg Law and Bloomberg Tax, or its owners.

Cristian Faundez is a manager in the economic and valuation services practice of KPMG LLP in Atlanta.