Earlier this week, my daughter committed to college for neuroscience. It was not an easy discussion. She’s a smart kid—great grades and test scores, two-sport athlete, president of the school newspaper, honor societies, the whole bit. She was delighted to get into one of the best schools in the country. And we turned it down.

The top reason? Money. Tuition and costs, including room and board, exceeded $80,000 per year.

Assuming no increases, that puts the cost of her undergraduate education at more than $300,000. I have three children. You can do the math.

Typically, when I mention the cost of college, I’m hit with a barrage of “What about scholarships?” And “Why just not go somewhere more affordable?” So, let me answer those questions. Many top schools do not award merit scholarships, only need-based awards. And others, like two that my daughter was recruited for as an athlete, are Division III—that means no money for sports. Despite those limitations, my daughter received hundreds of thousands of dollars’ worth of scholarship offers—still leaving out-of-pocket costs at upwards of $50,000 per year for some schools.

The Cost of College

And geography matters—the in-state tuition and fees for UNC-Chapel Hill are about $9,000 annually for in-state students, just under half of the cost to attend PSU as an in-state student in Pennsylvania.

I say all of this for context. There have been a lot of discussions of late about student loans, and I think some of these details about cost go missing.

I realize that some find that shameful; I am not bothered by the criticisms.

I am a first-generation college graduate. I started college at 16 with no money; I borrowed because I didn’t have other options. And when I entered law school, despite working three jobs, I needed loans to pay tuition.

Today, I am one of the 79 million adults who have taken out a federal student loan to pay for higher education. About 42 million of us are still paying those loans back—only 7.5 million of those are under age 25. 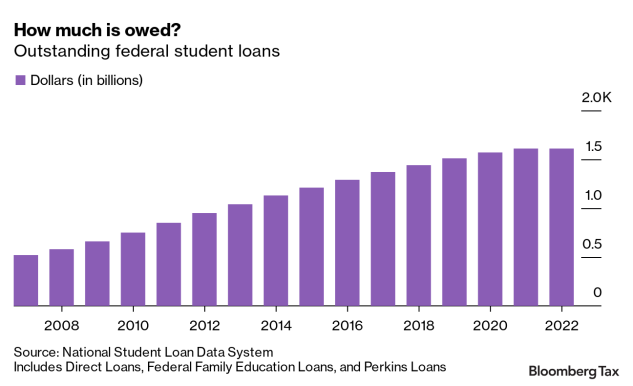 I have always considered my education an investment, and I am well aware that I wouldn’t have been able to go to college and law school without my loans, even with grants and scholarships.

But when I look at the numbers, I wonder how we got here.

History of Paying for Education

For years, higher education was largely a goal only for the wealthy. By the mid-1940s, more than half of the U.S. had no more than an eighth-grade education, and only 6% of males and 4% of females had completed four years of college. The GI bill would begin to change that, sending nearly 8 million World War II veterans to college. But outside of the GI Bill, there were few ways for low- to middle-income families to pay for school.

When the Soviets launched Sputnik into orbit in the 1950s, it sent the U.S. into a competitive frenzy. To help send more students to college, the first federal student loans were created under the National Defense Education Act in 1958. Private loans had existed before that time, with the first loan program in the U.S. established at Harvard University in 1840—more than a quarter of a century before creating the Department of Education (DOE) in 1867. Today, the DOE has the third-largest discretionary budget of the Departments, behind only the Department of Defense and the Department of Health and Human Services. As part of its duties, the DOE makes $150 billion in new and consolidated loans annually.

As you can imagine, those loans generate a lot of interest. Folks may be quick to point out that it’s tax-deductible. But the deduction’s history—and current status—is worth a look.

Interest—in all forms—has been deductible as part of our income tax system since 1894. But when the income tax was struck down as unconstitutional, Congress went back to work, creating a new federal income tax system which was made law in 1913.

The interest deduction survived the remodel, and on the 1913 tax return, “all interest paid within the year on personal indebtedness of taxpayer” could be claimed as a deduction.

That changed in 1986. As part of the Tax Reform Act of 1986, several deductions were eliminated. Specifically, section 511(b) of TRA 1986 repealed the deduction for personal interest, including student loan interest.

In a twist, taxpayers with student loans could deduct interest paid on those loans for themselves, spouses, or dependents “whether or not taxpayer itemizes other deductions.” Today, we sometimes call it an “above the line” deduction or an “adjustment to income.” For years, it was located on the front page of your Form 1040, but for the 2021 tax year, you’ll find it on Part II of Schedule 1—thanks to tax form simplification efforts.

Under the old law, the deduction was available only for interest payments made during the first five years of the loan. That changed in 2001 as part of the Economic Growth and Tax Relief Reconciliation Act of 2001—the five-year rule was eliminated, albeit only temporarily. Today, there is no five-year rule.

And if you’re married? That $2,500 cap is per tax return, not per taxpayer. That means that married taxpayers are restricted to $2,500 even if both taxpayers have loans. And you can’t get around it—you may not claim the deduction if your status is married filing separately.

The deduction is also subject to income phaseouts—that means as your income goes up, your maximum deduction goes down. Those phaseouts are subject to indexing, unlike the amount of the deduction, which means they are tweaked each year in keeping with the cost of living.

Interestingly, that means that President Joe Biden’s proposal to cancel student debt for those making under $125,000 would leave those with student debt remaining largely unable to claim the tax deduction.

So, how beneficial is the student loan deduction?

By comparison, when investing in a different kind of asset, roughly the same number of taxpayers—13,656,000—claimed $185 billion in home mortgage interest, an average of $13,547. That’s despite the doubling of the standard deduction.

Generally, I try to deliver a takeaway, and this week, I’m not sure that I did.

You see, I’m not a tax policy expert, and I’m not a politician. I’m a tax attorney. And I’m also a mom. And I don’t have the answers.

That said, I don’t believe that the current pace of college education costs is sustainable for families like mine. So far, the proposals to fix it appear to fall short. We can’t continue to simply encourage students to borrow more to pay increased costs. And if we cancel some loans but keep the system in place, nothing will change. A bolder, more thoughtful solution is required.

For more information about the student loan interest deduction, refer to IRS Publication 970.