The rise in sea levels is on track to increase highly destructive flooding fivefold in the U.S. by 2050, but a new study of home prices in coastal Florida suggests buyers are oblivious or indifferent to the risk. Governments need to take action to ensure that everyone has the right information about this critical threat.

Freddie Mac researchers led by Ajita Atreya found that homes directly exposed to projected sea-level rise command no discount over those that aren’t. There were discounts for homes in designated flood plains, but that’s probably to offset the cost of flood insurance they must carry if financed with a government-backed mortgage rather than future sea-level risk. The findings hold true for investment properties in addition to those bought as primary residences. 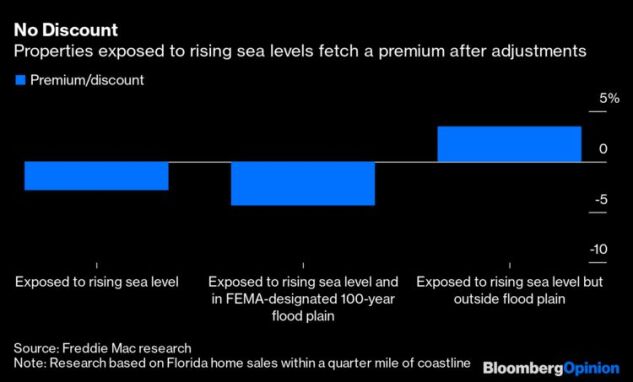 In all, the market’s willingness to look past sea-level risk amounts to a dangerous oversight. About 40% of the U.S. population lives in coastal counties, according to the National Oceanic and Atmospheric Administration, and NOAA researchers now project an average of 10 to 12 inches of sea-level rise by 2050, even if the world manages to cut greenhouse gas emissions before then.

Yet many buyers are clearly lacking important information. Florida and many other states don’t even require sellers to disclose past floods, let alone tell buyers that a home faces sea-rise risk. In a ranking from the Natural Resources Defense Council’s website, Florida is among 21 states that receive an “F” in flood disclosure, meaning there’s no statutory or regulatory requirement for flood disclosure at the time of sale. Even in the states that require disclosure, they often come at the 11th hour, when buyers are signing stacks of closing documents, according to Michael Gerrard, director of the Sabin Center for Climate Change Law at Columbia Law School. Renters typically get fewer protections than buyers. 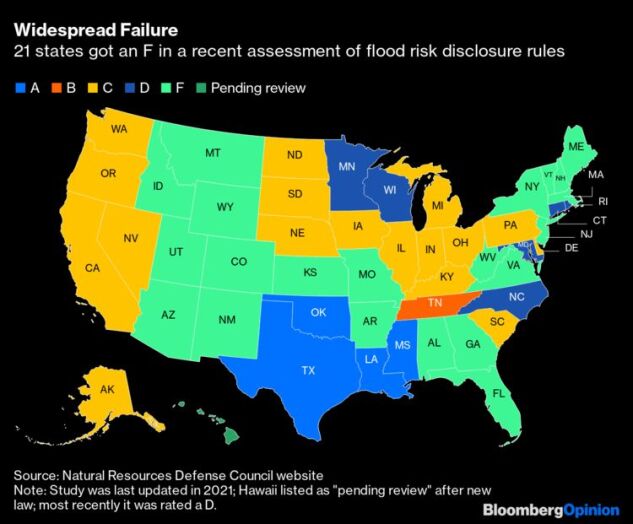 As the Freddie Mac study showed, insurance premiums do influence behavior: Buyers in designated flood zones tend to discount property values. Unfortunately, the government’s flood zones still don’t consider the future impacts of sea-level rise. Not having forward-looking flood maps “is like driving a car only looking into your rearview mirror,” Joel Scata, a water and climate attorney with the NRDC, told me. Understandably, politicians and their constituents often fight flood-plain designations out of concern they will depress the value of properties in their area. Government leaders in vulnerable states and municipalities should instead take the long view: accurate, forward-looking maps would encourage needed mitigation efforts.

Clearly, there have been some positive developments on addressing the so-called information asymmetries in flood risk for real estate. Realtor.com and Redfin Corp. have teamed up with nonprofit First Street Foundation to provide flood risk ratings for properties on their websites, and First Street’s founder Matthew Eby said he would like to extend the resource to more government entities. “We’re just trying to get people the information so that everyone is on the same playing field,” he told me by phone on Thursday. Meanwhile, Hawaii is set to become the first state to require sea-rise disclosures, effective on May 1. Others should follow suit.

Of course, disclosure laws alone aren’t a solution to the world’s climate problems. “It’s very low hanging fruit, and yes it’s important,” Abigail Fleming, an environmental justice lawyer and University of Miami School of Law professor, told me this week. As she pointed out, flood disclosures may also have adverse effects on housing prices for low- and middle-income households, some of which aren’t in vulnerable areas by choice but because they have no other options. That’s why climate action plans should combine disclosure requirements with mitigation efforts, voluntary home buyouts in vulnerable areas, relocation assistance and general education on flood risk that reaches people before they’re about to buy or rent a home. 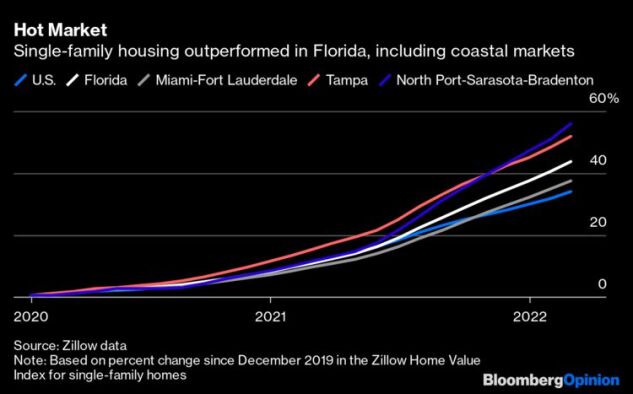 Even then, some parts of the housing market are likely to keep ignoring reality. As a Florida resident, I’ve seen firsthand how many homebuyers conclude (correctly or not) that their investment horizon is short enough that sea-level rise won’t matter. It’s also possible that near-term supply-demand dynamics are overwhelming analyses of the area’s long-term prospects. Like other parts of the Sun Belt, Florida is experiencing an influx of new arrivals seeking year-round warm weather, nice beaches and a vibrant culture. The real estate taxes they pay may ultimately help communities adapt to the challenge of sea-level rise, but it’s important first that everyone acknowledge the size and scope of the problem — and that includes the housing market.

(Corrects the name of the Natural Resources Defense Council in the fourth paragraph and chart.)

To contact the author of this story:
Jonathan Levin at jlevin20@bloomberg.net

To contact the editor responsible for this story:
Daniel Niemi at dniemi1@bloomberg.net