President Joe Biden has proposed giving more money—an extra $80 billion over the next decade—to the IRS to collect taxes.

While that’s welcome news for some in the tax profession, taxpayers may not be so sure. Many taxpayers already fear the IRS, and the notion that the agency may be getting more money for enforcement makes them worry: What if they come for me?

The Coalition to Protect American Workers is already seizing on this idea, running ads with a foreboding background and a voice-over that warns: “If Joe Biden gets his way, they’re coming: IRS agents.” The ad continues and says the agents are “aggressively coming for every dime they can grab at your house and at our small businesses.”

But is that really the case? Not exactly. IRS Commissioner Charles Rettig recently testified at a Senate Finance Committee hearing that the agency lacks the resources to catch tax cheats, even as the tax gap—the difference between what is owed and collected—has grown. Rettig says that tax evasion in the U.S. may total $1 trillion each year. The additional funding is intended to target high-earning and sophisticated tax evaders.

The administration also wants to close the tax gap by imposing new reporting requirements on banks and financial institutions for certain transactions. That suggestion has been echoed by the likes of former IRS Commissioner Charles Rossotti, who says, “Past experience shows that when additional specific data is required, taxpayers improve their reporting.” (This is something Rossotti has discussed on the Taxgirl podcast and in an op-ed piece for Bloomberg.)

So, while it is true that the current administration is seeking more money and information to shrink the tax gap, that doesn’t translate into IRS agents at your door. Even a beefed-up IRS isn’t coming for the average taxpayer.

That doesn’t mean, however, that the IRS isn’t serious about enforcement.

The IRS has a host of tools at its disposal to collect taxes owed. The two that you tend to hear about most are liens and levies. Both are considered administrative enforcement since they don’t require judicial action.

A lien is a claim or legal right against assets to satisfy a debt. The purpose of a federal tax lien is to protect the government’s interest in your property, including your real estate and personal property.

Under Section 6306, to file a lien, the IRS must first assess your tax liability and send you a notice, giving you the opportunity to pay your bill in full. If you don’t pay up, the entire amount owed—including any interest, penalty, and addition to tax—becomes a lien in favor of the government.

The lien may exist even if the IRS doesn’t officially file a Notice of Federal Tax Lien (NFTL). However, the NFTL puts creditors on notice that the government has a legal right to your property: This is important because the government often has what’s called a priority claim. A lien may also affect your ability to get credit.

The IRS will release the lien when you pay your tax liability in full or when the period for collection has ended. The IRS typically has 10 years to collect on a debt, though it may be longer under some circumstances.

The IRS may also work with you to withdraw or discharge a lien to sell or refinance assets if you meet certain criteria. And, while you may get a brief stay, a federal tax lien may continue even after you’ve filed for bankruptcy. 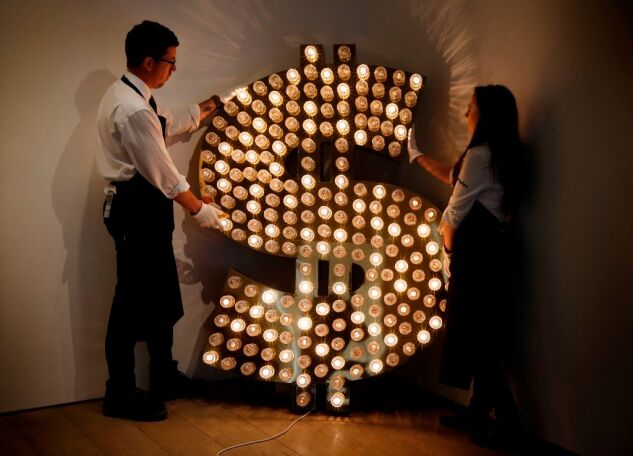 Sotheby’s employees pose with a piece of artwork entitled "$,” by artists Tim Noble and Sue Webster, at Sotheby’s auction house in London on June 8, 2015.
Photo by ADRIAN DENNIS/AFP via Getty Images

While a lien acts as sort of a placeholder, a levy means that the government is taking steps to seize your property to pay your tax debt.

As with a lien, if you receive a bill from the IRS and you don’t pay, the IRS will issue a notice. Under Section 6331(d), a Notice of Intent to Levy is your final reminder before the IRS acts to seize your assets because you still owe tax.

If you ignore the notice—or refuse to pay—the IRS can levy your assets to satisfy your tax debt.

But if you are working with the IRS, you’ll get a pass: Under Section 6331(k), the IRS may not levy your assets while you have an installment agreement or Offer in Compromise pending or in effect. And, the IRS will not levy your assets if it agrees that you’re unable to pay your debt due to economic hardship.

If no exceptions apply, the IRS can levy your wages by notifying your employer of your tax debt; you’ll receive a copy of that letter. The IRS won’t take your entire paycheck, but it will figure an amount based on what you owe and your living expenses. The levy won’t be released until you pay the debt, the IRS collects the debt, or the time for collections has ended.

In some cases, the IRS can seize other assets, including real property—like a house, as well as a boat, car, or business assets. I’ve even had the IRS chase motorcycles and horse trailers. But quite frankly, the IRS would rather have your check than your boat.

By law, some property can’t be levied. There are also limitations on the kinds of assets that can be levied. For example, under Section 6334, the IRS may not levy school books; some types of clothing; unemployment benefits; some annuities and pensions; service-connected disability payments; workers compensation; salary, wages, or income included in a judgment for court-ordered child support payments, and some types of public assistance payments.

The IRS may make other exceptions. For example, during the pandemic, the IRS opted not to levy on bank accounts with Paycheck Protection Program (PPP) funds received within the prior 24 weeks. The IRS took similar action with the second and third rounds of Economic Impact Payments, or stimulus checks, choosing not to levy on accounts with those funds received within the prior eight weeks.

Clearly, a levy is a drastic step—which is why it’s the stuff of ad campaigns. Keep in mind that you have opportunities to resolve your debt before the IRS moves to levy—or lien—your assets. However, many of these steps may require you to act quickly. If all of this feels overwhelming, keep in mind that during the collection process, you don’t have to go it alone: You can be represented by a tax professional.