Welcome back to the Big Law Business column on the changing legal marketplace written by me, Roy Strom. Today, we learn how Texas compensates people for time they never should have spent behind bars. Sign up to receive this column in your inbox on Thursday mornings.

I learned a lot while researching a story I wrote yesterday on litigation funders that invest in civil rights lawsuits brought by the wrongly convicted.

Here’s a wrinkle that didn’t make it into the story: Texas has more exonerations than any state since 1989, according to the National Registry of Exonerations. The state has exonerated nearly 400 people, though some didn’t spend time behind bars.

Flaws or inadequacies in those laws are one of the main reasons the market opportunity exists for financiers. After all, most states agree they should pay the wrongly convicted. They just aren’t doing a great job.

Consider this: Exonerees in those 36 states did not receive state compensation for nearly half of the years they wrongly spent behind bars, according to a study by Jeffrey Gutman, a law professor at the George Washington University.

In lieu of those payments—or while waiting years to collect them—exonerees often end up monetizing the one thing they have with potential value: a federal civil rights lawsuit.

Jury awards can reach upwards of $25 million, and financiers are willing to advance up to $1 million in some cases. Exonerees pay back nothing if they lose, but up to three times the amount if they receive a settlement or jury award. 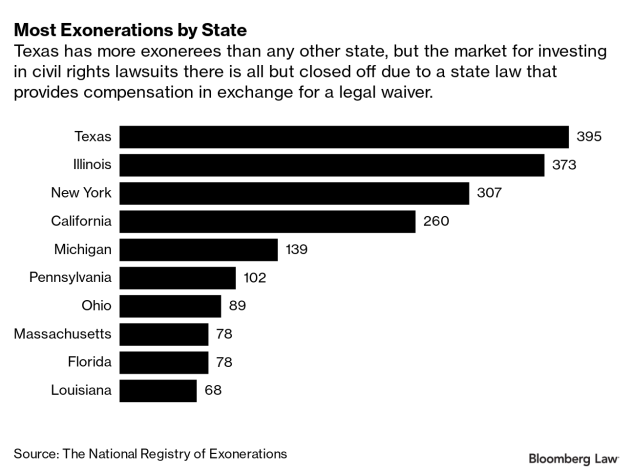 This dynamic doesn’t happen in Texas.

Funders aren’t in play because the state’s exoneree compensation law is one of a handful that requires beneficiaries to waive their right to sue the state for misconduct.

Sounds like a raw deal off the bat. But exonerees can choose to turn down the compensation and pursue the lawsuit instead.

I asked Mike Ware, executive director of the Innocence Project of Texas, whether people ever turn down the state’s deal.

“Ultimately, nobody I’m aware of,” he said.

Here’s the majority of what they get:

Texas’ program compares favorably with the $70,000 per year exonerees have been paid, on average, across the country, according to Gutman’s study.

Ware reluctantly agreed with something I’d heard from others about Texas’ compensation statute: It’s among the most generous in the country.

VIDEO: Making Millions Off Others’ Lawsuits: How Litigation Finance Works

On Big Law’s New Look: Big Law isn’t just for big cities anymore. Wilson Sonsini Goodrich & Rosati is opening an office in Boulder, Colo., which the firm says is a fast-growing hub of life sciences and technology companies. Not to mention a nice retreat for some partners.

On Return to Work: Morgan Stanley’s legal chief, Eric Grossman, doubled down on his view that remote work is “fraying” the bonds inside Big Law firms. Grossman in July demanded his law firms’ lawyers work in their offices.

(Corrects second paragraph of column published Feb. 3 that not all exonerees were in prison.)

Roy Strom
Reporter
Out of Prison and Broke, Wrongly Convicted Sell Their Cases (1)
© 2022 The Bureau of National Affairs, Inc.
All Rights Reserved