Kristen Clarke delivers remarks after being nominated to be the head of the DOJ Civil Rights Division on Jan. 07, 2021 in Wilmington, Del.
Photographer: Chip Somodevilla/Getty Images

The vote on , who has served as president of the Lawyers’ Committee for Civil Rights Under Law, tied 11-11 along party lines on Thursday morning. That means Majority Leader would need to bring a discharge position to the floor to pull the nomination out of committee for consideration by the full Senate.

Clarke is the second Justice Department nominee -- and second woman of color -- whose record was attacked by Republicans. Senate Republicans earlier refused to support the nomination of , who was eventually confirmed to be the department’s No. 3 leader. 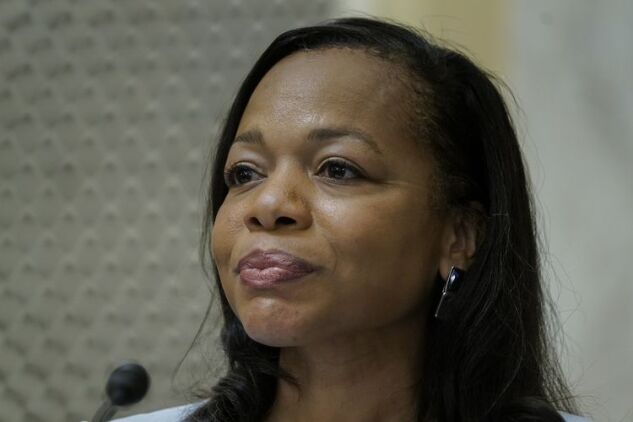 Clarke previously ran the civil rights bureau at New York’s attorney general’s office and, if confirmed, would be the first woman to lead the civil rights division, which is responsible for enforcing federal laws prohibiting discrimination on the basis of race, color, sex or disabilities and ensuring that voting laws don’t violate constitutional rights.

“She’s spent years working to advance civil rights of all Americans,” said Senator , a Minnesota Democrat, as the committee met to vote on advancing her nomination to the full Senate. “She is thoughtful, she is dedicated and she will do so much when it comes to the issues of our time.”

Republicans, however, criticized Clarke’s past record on legal cases and comments in which she appeared to advocate for cutting funding for police departments. Texas Republican Senator denounced her as a “radical.” Democrats pushed back, saying Clarke’s comments were taken out of context.

“Ms. Clarke is a partisan culture warrior who’s openly advocated the defunding of the police,” said Senator , a Texas Republican. “I’m concerned that she will weaponize the tools of the civil rights division.”