OMG Girlz perform at the 2012 BET Awards at The Shrine Auditorium on July 1, 2012, in Los Angeles.
Photo by Earl Gibson III/Getty Images For BET

The maker of the popular L.O.L. Surprise! OMG Dolls was granted a mistrial in an intellectual property dispute with rapper T.I. and former teen pop group OMG Girlz, after a California federal judge determined that prohibited testimony on cultural appropriation was introduced.

Prior to trial, which began Jan. 17, Judge of the Central District of California barred testimony about the dolls’ alleged racist cultural appropriation.

“Because of the incurable prejudicial cultural appropriation deposition testimony played to the jury,” wrote MGA in its written motion, “this court must declare a mistrial.”

MGA said that the testimony was “nothing less than a rant” by the witness about how she stopped purchasing the dolls because she didn’t want to support “a company that steals from African Americans and their ideas and profit off it.”

“There is no unringing this bell, no way for MGA to counter the improper testimony, and no instruction the Court can give to cure this problem,” the motion argued.

MGA Entertainment originally sued OMG Girlz, Clifford T.I. Harris, and Xscape singer Tameka “Tiny” Harris—whose daughter, Zonnique Pullins, was a part of the music group—in December 2020. It sought a declaratory judgment that its OMG Dolls didn’t infringe on the intellectual property rights of the former band after receiving a cease and desist letter. 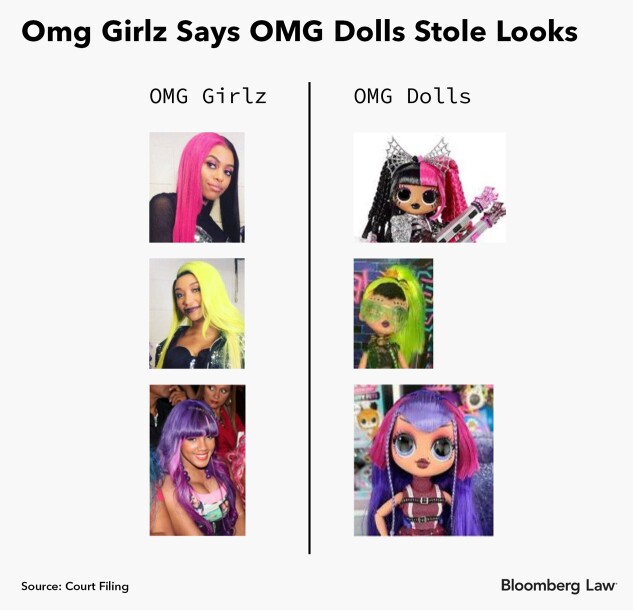 The OMG Girlz—who performed from 2009 to 2015—responded with counterclaims alleging misappropriation of their name and likenesses, trade dress infringement, and unfair competition. They also sought damages and an order blocking further sale of the infringing dolls. They claimed that the dolls’ names and appearances are similar to the members of OMG Girlz, and a comparison “makes it clear that the OMG Dolls were intentionally designed to trade on the OMG Girlz’ likeness and brand.”

The OMG Girlz’ original counterclaims also alleged cultural appropriation, accusing MGA Entertainment and its CEO Isaac Larian of using his “doll business to misappropriate the likeness of Black female artists.” Those claims were removed in subsequent filings, and Selna granted MGA’s motion to exclude mention of that claim at trial.

Following the judge’s decision to grant MGA’s motion for a mistrial, attorneys representing the OMG Girlz and T.I. and Tiny Harris filed an opposition seeking “to set the record straight.”

“The notion that the statement at issue was irreparably inflammatory in the same trial that MGA’s counsel was free to repeatedly invoke the ‘n’ word” during cross examinations “is inequitable,” said their opposition.

Race cannot be eradicated from the case, it claimed, and MGA’s counsel’s treatment of the OMG Girlz brought it to the forefront.

“Diversity has always been a key value at MGA Entertainment in both our people and our toys,” an MGA spokesperson told Bloomberg Law. “In fact, MGA brought diversity to the fashion doll category more than 21 years ago with the introduction of Bratz dolls. We are disappointed that the trial was cut short but look forward to vindicating our rights in the next trial.”

MGA previously won $85 million in damages against Mattel, which owns Barbie, over the ownership of Bratz dolls, which were marketed as “multi-ethnic.”

“Since the beginning of this case, MGA and Mr. Larian’s strategy has been to deny accountability, distract from the facts, and demean our clients,” said Cesie Alvarez, an attorney for Winston & Strawn LLP, representing the OMG Girlz. “We will not be deterred nor discouraged. We look forward to having a fair trial and bringing justice to the OMG Girlz and their enduring brand.”

MGA Entertainment is represented by Umberg Zipser LLP, Keller Anderle LLP, and in house counsel. T.I. and Tiny Harris and the OMG Girlz are represented by Winston and Strawn LLP and Sheppard Mullin Richter and Hampton LLP.