Former Minneapolis police officer Derek Chauvin was found guilty of killing when he knelt on the man’s neck for 9 minutes and 29 seconds, a videotaped death that ignited a summer of rage and the greatest racial reckoning in the U.S. since the 1960s.

A jury on Tuesday convicted Chauvin of second-degree murder and lesser charges for cutting off Floyd’s air supply last May 25 as he lay handcuffed and begging for mercy. The conviction, which stood out against decades of impunity for most police excessive-force cases, could mean decades in prison for the 45-year-old. Chauvin will face sentencing in eight weeks.

The verdict, reached after less than 11 hours of deliberation, came 11 months after graphic footage of Chauvin and Floyd went viral, shocking millions and prompting nationwide protests that spread across the globe. As the verdict was read, a crowd near the crime scene reacted with cheers and hugs. 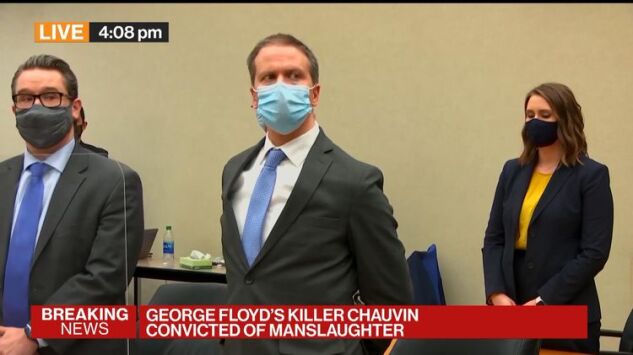 In an address from the White House on Tuesday night, President voiced optimism that the verdict could mark a “moment of significant change” for a nation he said hadn’t done enough to confront racial injustice.

“No one should be above the law and today’s verdict sends that message, but it’s not enough,” he said. “This takes acknowledging and confronting head-on systemic racism and the racial disparities that exist in policing.” Earlier, he told Floyd’s family in a phone call their lawyer recorded and posted on Twitter that “Nothing is going to make it all better. But at least, God, now there’s some justice.”

Floyd’s death galvanized the Black Lives Matter movement, already active after years of previous killings by police and vigilantes, while attracting unprecedented support from White people who marched for weeks last summer. Floyd’s death sparked an urgent debate about the broader issue of inequality and institutionalized racism in all its forms, including in corporate America. 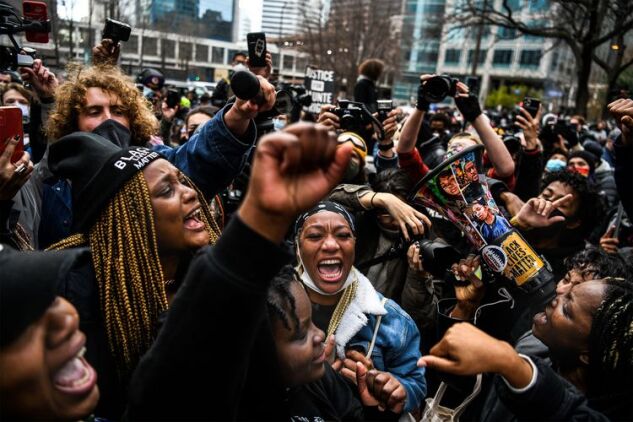 Anger had been building since the 2012 death of Florida teenager Trayvon Martin at the hands of a neighborhood watch member, followed two years later by the police killing of Michael Brown in Ferguson, Missouri. Months before Floyd’s death, White men in Georgia shot Ahmaud Arbery as he jogged, and Kentucky police killed in her home after waking her and her boyfriend in a drug raid gone awry.

While those deaths and many others led to calls for justice, it was Floyd’s killing as bystanders begged police for mercy that set off national outrage.

“Painfully earned justice has arrived for George Floyd’s family,” Ben Crump, a lawyer who is head of the Floyd family’s legal team, said in a statement. Crump said the verdict’s impact extends beyond Minneapolis and will have “significant implications for the country and even the world.” 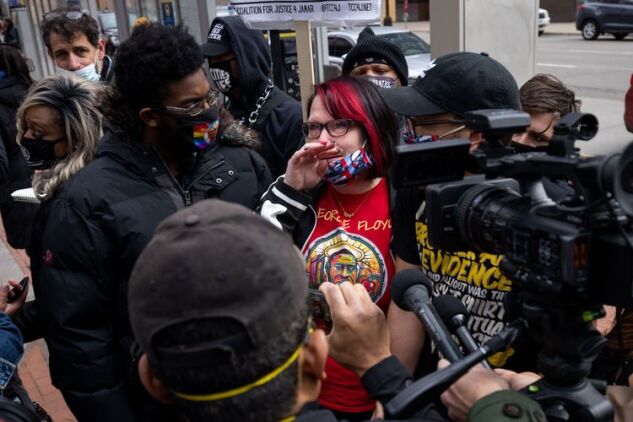 The deadly incident unfolded after Chauvin and other officers responded to a call from a convenience store, where a clerk said Floyd had tried to use a counterfeit $20 bill.

Body-camera footage showed jurors that Floyd became agitated when officers approached him in his car with guns drawn. He shouted he was afraid of being shot, and the confrontation escalated after officers attempted to put him in a squad car. Floyd screamed that he was claustrophobic and couldn’t breathe. Officers wrestled him to the ground, and onlookers filmed Chauvin kneeling on Floyd’s neck. He had no pulse when paramedics arrived.

The store on the corner of East 38th Street and Chicago Avenue is now a memorial that draws visitors from across the country who come to pay tribute to Floyd.

Prosecutors opened their case with the viral video, telling jurors that the amount of time Chauvin kneeled on Floyd would be “the most important number” they would hear. They built the case chronologically, calling fellow officers, paramedics and bystanders to recreate each step in Floyd’s eventual death.

Medical experts explained how Chauvin’s actions deprived Floyd of oxygen, killing him. Passersby told jurors about the increasingly frantic calls for Chauvin to let Floyd breathe. One recounted calling the police department to report its own officers. 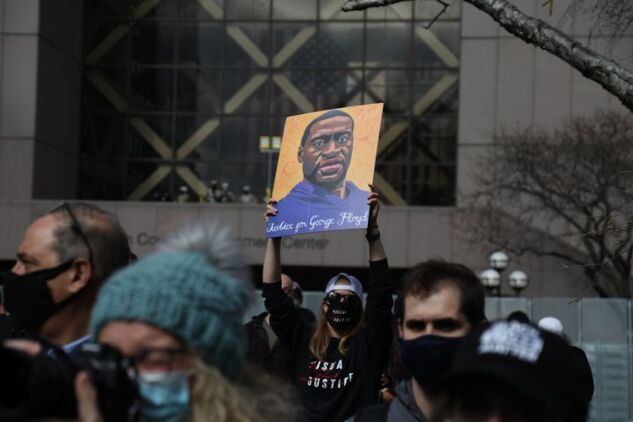 A person holds a poster of George Floyd outside the Hennepin County Government Center in Minneapolis, on April 20.
Photographer: Emilie Richardson/Bloomberg

Chauvin’s trial was notable for the number of police officers, including Chief Medaria Arradondo, who testified against one of their own, rejecting the closed-mouth culture that has historically pervaded law enforcement. Members of the Minneapolis Police Department and other use-of-force experts testified that Chauvin’s actions were “objectively unreasonable.”

The willingness of police to testify against Chauvin amounted to “an inflection point,” said Arthur Ago, director of the Criminal Justice Project at the Lawyers’ Committee for Civil Rights. “We will see if that type of police participation in the prosecution of other police officers continues,” Ago said. “Without that participation of other police officers, we’re going to slide back to where we were before this trial.”

The jurors were swayed. The second-degree murder charge carries a maximum sentence of 40 years, and sentencing guidelines recommend 12 1/2 years. Chauvin was also convicted of third-degree murder and manslaughter.

“I would not call today’s verdict justice, however, because justice implies true restoration,” , the Minnesota attorney general who led the prosecution, said at an evening news conference. “It is accountability, which is the first step toward justice.”

Chauvin’s conviction sets the stage for the coming trial of the other officers on the scene of Floyd’s death, Thomas Lane, J. Alexander Kueng, and Tou Thao, who are charged with aiding and abetting the killing. But the case will have ramifications far beyond Minneapolis.

“The world really had an opportunity to watch and see how justice was meted out,” said Sharon Fairley, a professor at the University of Chicago Law School, who created the city’s Civilian Office of Police Accountability. “The incident itself created a debate around police reform that was way more robust than we had ever seen before. Those conversations would have been unheard of even five years ago.” 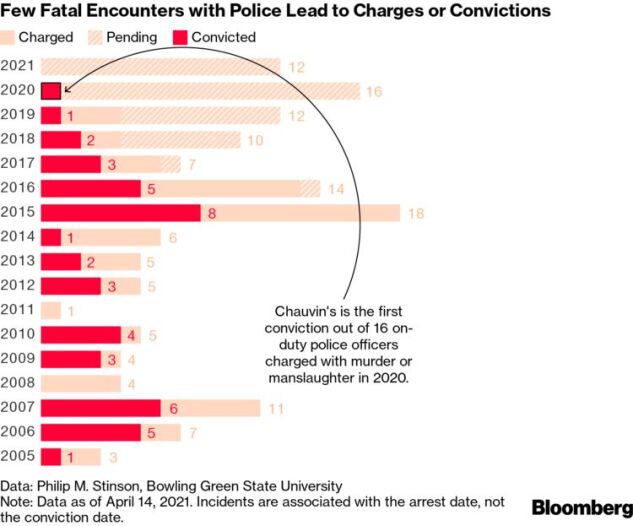 Floyd’s death divided Americans politically: Reflexive support for the police became a Republican totem as Democrats drew strength from those who saw injustice.

Former President infuriated Democrats last June by celebrating a jobs report that he said was a “great day” for Floyd looking down from heaven, and then later retweeted a supporter who said Floyd was “not a good person.”

The conflict grew only more bitter. Protests swept across the U.S., often beginning peacefully and devolving into violence after dark.

Even as Trump attempted to galvanize his support with scorn for the Black Lives Matter movement, defended Americans who marched peacefully for justice and chose as his running mate the first African-American and South Asian woman, .

The political impact resounded in a newly Democratic Congress after the November election. In March, the House of Representatives passed the George Floyd Justice in Policing Act, which bans choke holds, prohibits so-called no-knock warrants and chips away at the “qualified immunity” protections given to officers in legal cases. The measure faces uncertain prospects in the 50-50 Senate, where Republicans have enough votes to block most legislation.

Senator of Minnesota, a former prosecutor in the county where the trial was held, said in a statement the verdict should prompt federal lawmakers to enact laws requiring changes in policing practices.

Senator of South Carolina, the only black Republican senator, said “the verdict just reinforces that our justice system continues to become more just.” He said he saw a path forward for a bill that would require de-escalation training for local police officers and increase use of body cameras.

After the upheaval that followed Floyd’s killing, companies began to consider their role in America’s fraught racial situation.

It put pressure on corporations to diversify their ranks, reform policies and acknowledge the long-ignored racial wealth gap. Just this month, CEO said in a letter to shareholders that Floyd’s death helped expose the “fault line” of inequality, while said it will spend more than $2 billion with hundreds of Black-owned businesses by the end of 2025.

Even the Federal Reserve hosted a conference on racism after a Black economist said his peers perpetuate inequality by ignoring race and racism in their research.

But the ultimate cost has been paid in human lives, as Tuesday’s verdict made clear. It was a landmark in brutality cases, said Gwen Carr, the mother of Eric Garner, who was killed in a police chokehold in Staten Island, New York in 2014.