Equal pay litigation will likely rise with momentum growing around the country to adopt stricter laws and increase government enforcement to shrink persistent pay gaps for women and people of color, attorneys and academics said.

“The momentum on pay equity still seems to be there. I won’t be surprised if we see an uptick, especially if more states enact stricter laws that remove barriers,” said Matt Gagnon, a Seyfarth Shaw partner in Chicago who authored a report released Wednesday highlighting legal developments in pay discrimination cases.

The Biden administration also has signaled plans to strengthen gender equity at a time when women in the U.S. are disproportionately exiting the workforce compared with men during the Covid-19 pandemic, and are paid about 82 cents on the dollar compared with men—with the gaps even larger for women of color. 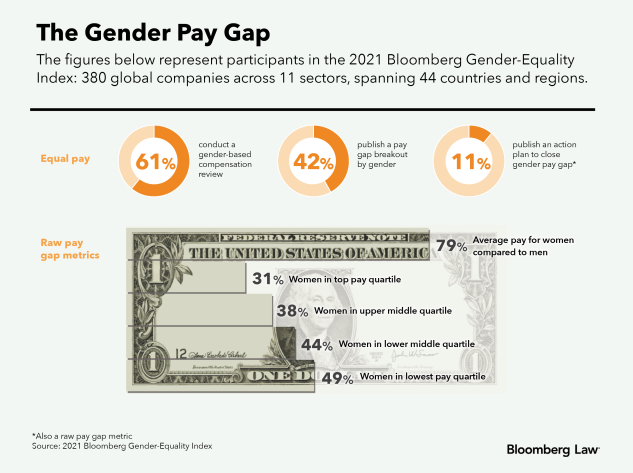 Worker charges alleging violations of the Equal Pay Act—one of several federal civil rights laws—had been steadily rising at the U.S. Equal Employment Opportunity Commission, but tapered off in 2020, according to agency data.

Covid-19 may have contributed to slow the number of claims, particularly as women left the workforce at higher numbers, said Kelly Dermody, a Lieff Cabraser Heimann & Bernstein partner who represents workers in equal pay litigation.

“It will be interesting to reflect back at least another year to understand what just happened for women because of Covid, and to see what industries did a good job and what industries just let women fail and slip out of the workplace without support,” she said.

Existing equal pay laws also could use a refresh, some say.

“There’s just a really big gap between what the laws protect and how pay discrimination happens,” said Joanna Grossman, a professor at Southern Methodist University’s Dedman School of Law.

University of Florida Levin College of Law professor Stephanie Bornstein said existing pay bias laws can be interpreted more broadly than the stances the courts have taken in the past.

The U.S. Chamber opposes the legislation, but has said it will work with Congress to look at other pay equity proposals.

The legislation’s fate in the Senate is unclear, but several states across the country also are proposing laws that would similarly increase transparency. The ingrained imbalance of power between corporations and workers is unlikely to change, Grossman said, unless there’s additional legislation.

“There’s sort of nothing in the way that federal law is structured to get employers to address pay disparities,” she said.

Attorneys and advocates say plaintiffs are advancing theories under federal laws like the Equal Pay Act and Title VII of the 1964 Civil Rights Act that could take hold, particularly as more attention is focused on this area.

For example, employer use of a worker’s salary history to set pay is a critical issue and plaintiff’s attorneys could use that company policy to bind a class action together, said Seyfarth’s Gagnon.

“I haven’t seen it flower and become what it could be,” Gagnon said. “That is one of the hottest developments out there.” 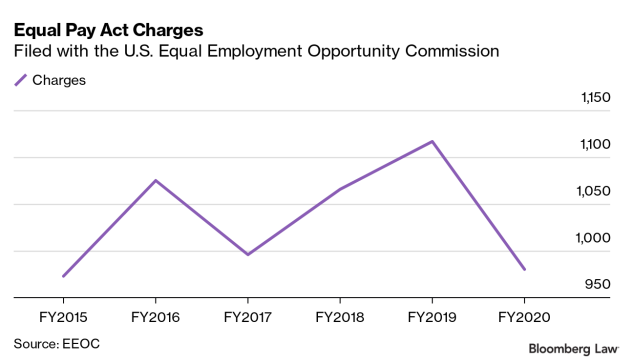 He said the Equal Pay Act’s “equal work” requirement is a steep hurdle for workers trying to bring lawsuits, and that companies are defending themselves by arguing that workers may have different salaries because of negotiations and also by companies’ different classifications or pay structures.

“The cases are so fact-dependent and the universe of facts run the gamut,” Gagnon said. “There are instances where employees try to peg the use of negotiation as ‘a factor other than sex’ to this issue from prior salary issue. It’s a fraught issue in case law now.”

Still, the number of cases alleging unequal pay could rise, Dermody of Lieff Cabraser said. Companies lean heavily on the playbook of trying to show that workers don’t perform “equal work.” Laws amended in states including California and New York clarify what the standard should be for comparing positions, she said.

The EEOC previously collected pay data from private employers and could do so again during the Biden administration.

The OFCCP is expected to ramp up anti-discrimination enforcement over the coming months. It’s also been known to mandate pay equity studies as part of settlements, like what it did in an agreement this year with Google.

The Covid-19 pandemic is likely to exacerbate long-standing pay disparities for women, SMU’s Grossman said. The economy has faced ups and downs before, but none that have involved “the bottom falling out of childcare and schools,” she said.

“Women, we know, continue to do a disproportionate share of childcare in the home, even if they work full-time,” Grossman said. “Whether you lost your job or not in this, as a woman, there’s a good chance that your job situation is worse, because you’re either trying to do a job at home while taking care of kids, or supervising school at home.”

Strong family policies, like bolstering paid leave, would enable more women to work without having to leave the workforce, said Jocelyn Frye, senior fellow at the Center for American Progress. She said those are complimentary policies to those that lower barriers for filing equal pay lawsuits and encourage government enforcement actions.

“We have to get beyond the rhetoric, no one is against equal pay,” Frye said. “We can’t afford to have government on the sidelines as we try to recover from the pandemic. One of the critical places is making sure our recovery is an equitable recovery and that women have the same access to jobs and they are paid fairly.”