A string of recent court decisions have accepted sex-based discrimination claims by male students after their schools sanctioned them for harassment or assault, potentially complicating plans for a complete overhaul of former Education Secretary Betsy DeVos’s campus sexual misconduct regulations.

President Joe Biden plans to rewrite the DeVos rule governing Title IX, the 1972 federal law that bars gender-based discrimination at schools. The law has been at the center of debates over schools’ response to sexual harassment—mostly against women—on campus.

Advocates for strong enforcement of the law at colleges say the court decisions effectively turn Title IX on its head by lowering the bar for plaintiffs to allege anti-male bias. 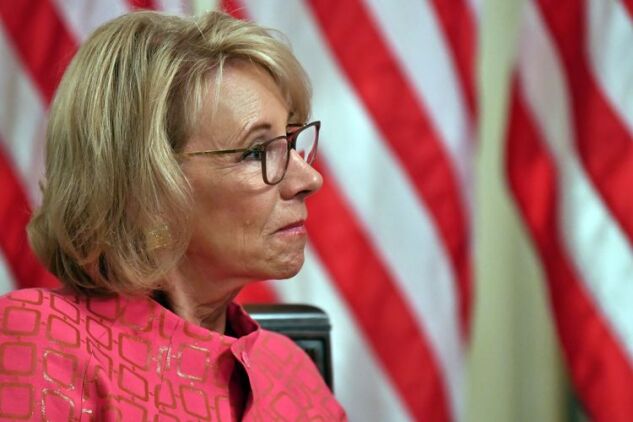 “Recent case law is going have a profound impact on what the Biden administration can do with respect to the Title IX regulations,” said Jim Newberry, a lawyer at Steptoe & Johnson PLLC who advises colleges on issues including Title IX.

The wins for accused students alleging anti-male bias have been mostly at the appellate court level, and focused on due process requirements. But they could pressure colleges to settle lawsuits with students accused of misconduct, advocates warn.

“Title IX is becoming a tool for people accused of sexual harassment rather than people who experienced sexual harassment,” said Alexandra Brodsky, an attorney at Public Justice who co-authored a forthcoming law review article on anti-male bias findings in Title IX cases. Courts are offering a lower bar to male students than to other plaintiffs who have made discrimination claims, she said.

DeVos in 2017 cited “dozens upon dozens of lawsuits” from punished students to justify scrapping guidance issued by President Barack Obama’s administration in 2011 and 2014 that was intended to prod colleges and K-12 schools into responding more effectively to sexual misconduct.

The framework created by those federal policies, she argued, led schools to adopt procedures unfair to accused students. DeVos issued new regulations last year requiring, among other provisions, that accused students have an opportunity for a live hearing on misconduct claims, and that they be able to question complainants.

As colleges began to mete out more sanctions for sexual harassment or misconduct, male students filed a wave of legal challenges, alleging schools violated their due process rights. Notable wins for plaintiffs have mostly come at the evidentiary stage of litigation challenging college sanctions. Those cases followed other decisions in which federal courts ruled colleges must offer more due process procedures to accused students.

In a 2019 case at Purdue University, for example, the Seventh Circuit found that a male student plausibly alleged gender bias because the university’s resource center shared a Washington Post opinion article arguing that men, not alcohol, cause sexual assault on campus.

In Doe v. University of Sciences, a male student alleged gender bias because he said the school singled him out and failed to discipline two female students who violated school policy by sharing details about their Title IX complaints, the Third Circuit found last year.

The Sixth Circuit in a 2020 Oberlin College case found evidence of anti-male bias in part because of the length of time of investigation. And the Ninth Circuit ruled the same year that the University of Arizona’s failure to review exculpatory evidence submitted by a male student supported a claim of gender bias.

The Third Circuit, Seventh, and Ninth Circuit in those decisions, and other courts elsewhere, have also found that colleges’ reaction to the federal guidance from the Obama administration was relevant to allegations of anti-male bias.

Colleges in a Bind

McLaren Lanham said lawsuits from sanctioned students are now common for most colleges. “At this point, schools are quite used to seeing appeals, and then seeing those appeals turn into litigation,” she said of Title IX cases.

The number of federal lawsuits filed by college students sanctioned for sexual misconduct has gone up since 2014. Seventy-six such lawsuits were filed in 2017; new suits edged down to 59 last year. 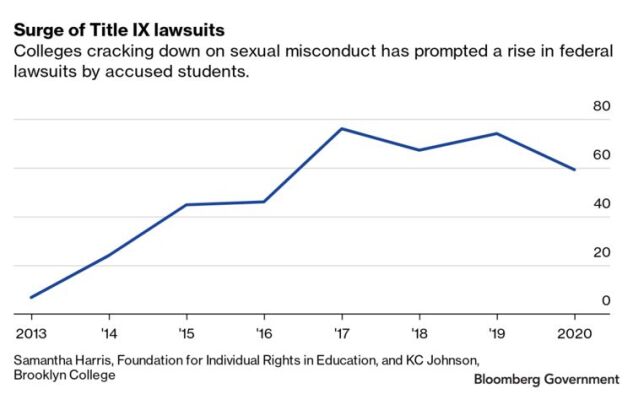 Just over half of court rulings in those cases have favored students, according to a 2019 report on those cases by Samantha Harris, a partner at Allen Harris PLLC and vice president at the Foundation for Individual Rights in Education, and K.C. Johnson, a history professor at Brooklyn College and the CUNY Graduate Center. Both Harris and Johnson were critical of the Obama-era Title IX policies.

The court decisions on anti-male bias claims, beyond creating an incentive for colleges to settle with students who sue, “will have an impact on how schools respond to sexual harassment and assault because of the very real concern about litigation by respondents,” said Shiwali Patel, senior counsel at the National Women’s Law Center and a former official at the Education Department’s Office for Civil Rights.

Kimberly Lau, a lawyer at Warshaw Burstein LLP who represents students in Title IX cases, settled a case with Columbia University earlier this year in which she argued a male student had suffered from discrimination on the basis of his gender.

“Ten years ago, it was almost unheard of to be litigating in this way,” she said. “It’s more well known now, it’s more public that these are options for students.”

As vice president under Obama, Biden was closely linked to the new federal policy on Title IX. He co-chaired a White House task force to address student sexual assault, and helped unveil the administration’s new guidance in 2011. As a presidential candidate, Biden said the DeVos rule gave colleges “a green light to ignore sexual violence.”

Attempts to block the DeVos regulations in court have been unsuccessful. A federal judge last year threw out for lack of standing a lawsuit brought by the ACLU and the advocacy group Know Your IX.

Biden has already started the process for unwinding those regulations. The White House directed the Education Department this month to assess the existing Title IX rule, the first step in what will likely be a years-long process to issue new regulations. Steptoe & Johnson’s Newberry said recent court decisions and the promulgation of the DeVos rule will make it more complicated to dramatically overhaul federal policy on campus sexual misconduct.

Joe Cohn, legislative and policy director at the Foundation for Individual Rights in Education, which advocates for protections for accused students, warned the Biden administration against a dramatic overhaul of the DeVos regulations.

“We’re hopeful they will recognize that national policy has to provide robust due process protections for it to satisfy the requirements of Title IX,” he said.

A report last month from Know Your IX found that many colleges are falling short of their obligations under the Title IX law, and in many cases prioritizing the needs of accused students. One in five of survivors surveyed by the group said their school told them they could face defamation suits for reporting their assailants, warnings many interpreted as coercive.

Brodsky, from Public Justice, said she feared any steps by the Biden administration to support survivors of sexual harassment on campus will be used by plaintiffs attorneys to bolster lawsuits against colleges.

“That puts civil rights agencies in an incredible bind,” she said. “Where if they take any regulatory action to stop discrimination, they would be fortifying lawsuits brought by perpetrators.”

To contact the reporter on this story:
in Washington at akreighbaum2@bloomberg.net

To contact the editors responsible for this story:
at bkohn2@bloomberg.net