Davis Polk & Wardwell has beaten the associate attorney pay scale announced by Milbank on Thursday with its own set of salary raises that pay associates $202,500 to $365,000 per year, pushing several competitors to match it.

Davis Polk cited “exceptionally high” activity levels across the firm in a memo viewed by Bloomberg Law on Friday and noted the new scale will take effect July 1.

The announcement is the latest salvo in a salary race that Milbank kicked off by announcing it would raise starting salaries for associates from $190,000 to $200,000, and give its most senior associates a pay bump from $340,000 to $355,000. This was the first across-the-board salary raise Big Law associates have seen since 2018, and comes at a time when the competition for talent has reached a fever pitch.

McDermott Will & Emery, which announced Thursday that it would raise salaries to match the Milbank scale, is bumping pay again to keep up with Davis Polk, Chairman Ira Coleman told Bloomberg Law.

Baker McKenzie has also matched the Davis Polk salary scale for its U.S. associates, a Friday afternoon firm statement said. So did Proskauer Rose, according a firm memo viewed by Bloomberg Law.

Davis Polk has lately emerged as a compensation leader, and has also been an early mover on associate bonuses since the pandemic began. The firm is coming off of a year in which it rode high demand in practice areas like capital markets, bankruptcy, and regulatory to major financial success, and even loosened its strict lockstep pay system , a move that makes it a more attractive lateral landing spot. 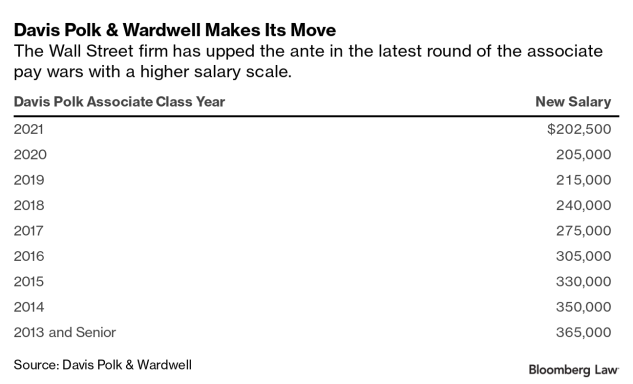 The nation’s largest law firms have been providing incentives to their associates to work hard for long hours over the last 18 months, as the volume of work, at least on the corporate side, has continued to surge despite the global coronavirus pandemic.

Chief among these incentives have been bonuses, and the most senior Big Law associates this year are positioned to earn up to $164,000 in extra cash, beyond their base pay.

Last year, Davis Polk set the pace on associate special bonuses, creating a scale that ranged from $7,500 for first-year associates to up to $40,000 for the most senior, in addition to conventional year-end bonuses.

The firm raised the bar again for bonuses in March 2021, announcing a two-part set of extra payments that total from $12,000 to $64,000 depending on associate seniority.

In both cases, Davis Polk leapfrogged over Big Law competitors who had revealed bonuses early, but set them at a lower range initially.

Davis Polk has also used benefits like wine packages and fitness equipment an other luxury gifts as a reward for associates.

It’s likely that at least some large Big Law firms will again follow Davis Polk’s lead on pay. Cadwalader, Wickersham & Taft, Mintz, Levin, Cohn, Ferris, Glovsky and Popeo, and Winston & Strawn, have all matched Milbank’s salary scale since it was announced, according to memos from those firms viewed by Bloomberg Law.

The question remains as to whether boosted salaries and bigger bonuses will be enough to retain associates, who are also experiencing high rates of burnoutcombined with the many stressors of living and working through a global pandemic.

Whatever their effect on associates, salary raises will remain on a firm’s balance sheet indefinitely, as unlike bonuses and gifts, they are a fixed cost.

-Meghan Tribe and Chris Opfer contributed to this report

To contact the reporter on this story: in New York at rmintzer@bloomberglaw.com

To contact the editor on this story: Chris Opfer in New York at copfer@bloomberglaw.com