Overdose deaths among Black people and American Indians soared in the first year of the Covid-19 pandemic, outpacing fatalities among Whites during the same time period, according to data released Tuesday by the Centers for Disease Control and Prevention.

Disruptions to treatment and recovery services were among the drivers behind a surge in overdose deaths between 2019 and the first year of the pandemic, the CDC said in a release announcing its findings.

Black people saw the highest increase in overdose fatalities, going up 44% between 2019 and 2020, the CDC reported. American Indians and Alaska Natives had similarly dismal numbers, with overdoses increasing 39% in the same time period. White people, meanwhile, had an increase of 24%.

Released as part of a July CDC report chronicling deaths by demographic and social factors, the overdose numbers reflect the toll of America’s addiction crisis in the Covid-19 era. Nearly 92,000 drug overdose deaths occurred in the U.S. in 2020, the CDC said. That’s 30% higher than the previous year, with recent deaths “largely driven by illicitly manufactured fentanyl and fentanyl analogs,” the report said. 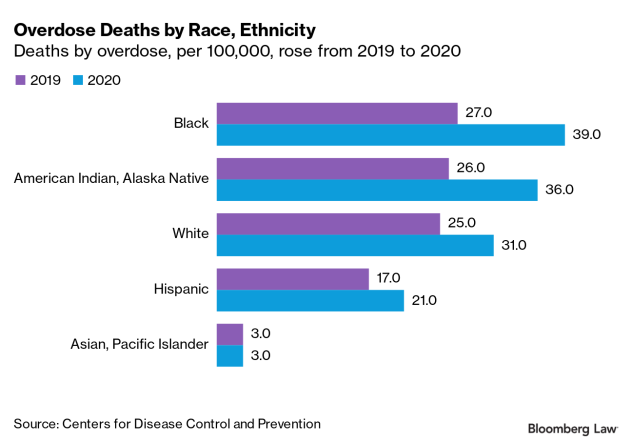 Reported overdose deaths remain at historic highs across the country. Over 104,000 deaths were reported in the 12 months leading up to February 2022.

The Tuesday report analyzes deaths from 25 states and the District of Columbia and includes a look at fatalities by income inequality and treatment inequality. Around 1 in 10 American Indian or Alaska Natives and Hispanic individuals were reported as receiving substance use treatment. For Black people, that number is 1 in every 12, the CDC said.

“Higher availability of treatment services does not mean improved access to care. The known differences in access, barriers to care, and healthcare mistrust could play a role in exacerbating inequities even when treatment is available in the community,” the CDC said in a statement announcing its findings.

The largest rate increase came among Black people between 15 and 24 years old, coming in at 86%, the CDC said.