With Biden’s first year in office bogged down by the persistent coronavirus and inflation, Democrats are starting an already difficult mid-term election year the same way they ended 2021 -- in a standoff with Senators and over the best path for the country.

The latest blow to Biden’s agenda was delivered in two stages. Republicans used Senate filibuster rules to block the legislation from getting a vote on passage. Then Majority Leader made a last-chance bid to temporarily change those rules to allow a simple majority vote on the bill. That was rejected 52-48 with Manchin and Sinema, who both backed the legislation, joining Republicans in preserving the 60-vote threshold to advance it.

Biden earlier in the day indicated he was resigned to defeat on the election initiative. At a White House news conference, he said Democrats likely would have to break up the voting rights bill -- as well as his economic agenda -- to get any part of it through Congress.

“There are a number of things we can do, but I also think we will be able to get significant pieces of legislation if we don’t get it all now,” Biden said. 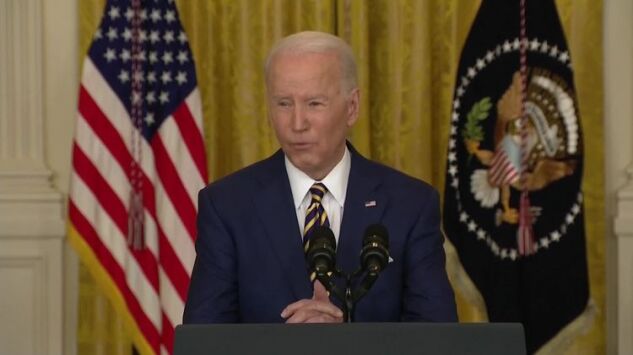 WATCH: U.S. President Joe Biden says it is “clear” that Democrats are going to have to break up his economic agenda.
Source: Bloomberg

After the Senate acted, Biden said in a statement that he was “profoundly disappointed that the United States Senate has failed to stand up for our democracy.”

Manchin took the Senate floor as Biden was conducting his news conference to restate his opposition to changing Senate rules. Manchin argued rules changes in the Senate should be made on a bipartisan basis and changing them with a simple majority rather than a two-thirds vote would shred the Senate as an institution.

“We’re going to break the rules to change the rules,” Manchin said. “We’ll make up new rules as we go along, invite ourselves and future majorities to disregard the rule book at will.”

Sinema said in a statement after the rule vote that while she voted to support the bill expanding ballot access, “I also maintained my longstanding opposition to separate actions that would deepen our divisions and risk repeated radical reversals in federal policy, cementing uncertainty and further eroding confidence in our government.”

Democrats said the voting rights legislation could help counter new laws passed by GOP-led legislatures in 2021 that critics say curtail ballot access for minorities and other Democratic-leaning voters. Republicans said the voting rights legislation was first drafted by Democrats in 2019 and was designed to disadvantage Republicans in future elections.

Senate Minority Leader accused Democrats of manufacturing a “fake panic” about voting rights to change the Senate’s rules and enact “a sprawling takeover of our entire political system.”

And Senator of South Dakota, the No. 2 Republican leader, said changing the filibuster would alter the Senate irrevocably by dashing the need for bipartisanship.

If Democrats changed the rules, “then all bets are off,” Thune said. “Then the Senate becomes the House of Representatives, and policy changes every two years or every four years, defending who’s in power, and there’s no stability, no predictability, there’s no moderation and no incentive for this body to work together across the aisle.”

The legislation at issue entails two Democrat-drafted voting rights measures that were combined into a single bill passed by the House last week — an approach that allowed Schumer to bring it up without the threat of an initial GOP filibuster.

The legislation includes the Freedom to Vote Act, a broad bill backed by every Senate Democrat and designed to expand ballot access, and a second measure that restores the Justice Department’s ability to require some states to get pre-clearance for changes to their voting laws.

The Democrats’ defeat on the legislation comes on the heels of a stalled debate on Biden’s economic agenda. Last year, other Democratic agenda items fell by the wayside, including policing reforms, a pathway to citizenship for undocumented immigrants, a minimum wage increase and new gun controls. Republicans blocked the voting rights legislation shortly after Biden held a news conference to discuss his first year in office and the path forward into 2022, when control of the House and Senate are at stake in midterm elections.

Numerous Democrats gave emotional speeches complaining about Republican states restricting access to voting, and about Republican obstruction. of Montana ripped a requirement in his state that student IDs not count as voter identification. He dismissed the idea that a rules change for the voting rights bill would destroy the chamber.

Senator , a Minnesota Democrat, assailed limits on drop boxes in Democratic areas of Texas and other restrictions she said were designed to silence voters.

Senator of Alaska, the only Republican to back a more modest Democratic effort to restore Voting Rights Act preclearance provisions for new state voting laws, also bemoaned the state of the Senate before voting for the GOP filibuster.

“It’s much easier to try to do things alone than to try to build consensus,” she said. She said the Senate has to write a bipartisan bill and that the Democratic legislation was too restrictive on states’ authority.

“Both sides are now set to cast doubt on elections if they don’t win and that takes us to a very troubling place,” she said. “I refuse to believe that this is the best that we can do right now.”

Murkowski, Manchin and Sinema are among a group of moderate senators trying to cobble together an election package that would change the Electoral Count Act to avoid a repeat of the aftermath of the 2020 election, including clarifying that the vice president does not have the authority to unilaterally block a state’s electors.

(Updates with Biden statement on vote, in sixth paragraph, Sinema in ninth)