The Department of Justice headquarters in Washington.
Photographer: Andrew Harrer/Bloomberg

A broad coalition of civil rights and liberties groups are pressing the Biden administration to revive a Justice Department unit dedicated to making legal services more available for poorer Americans.

Obama-era DOJ officials and advocates, like the Center for American Progress and American Civil Liberties Union, have been lobbying officials to revive the DOJ Office for Access to Justice that was shuttered during the Trump administration. Democratic lawmakers are said to be working with the Biden administration on a bill to fund the office, which could also be included in the president’s upcoming budget request.

“I’ve heard a bunch of discussion about reviving the office,” said a former senior Justice Department official who spoke on condition of anonymity. “I definitely think it’s on the table in the new DOJ.”

Now, advocates of a revived office say two powerful officials at DOJ and the White House who were staunch allies of the former office—newly confirmed Associate Attorney General Vanita Gupta, and White House Chief of Staff Ron Klain—are in key positions to re-build it.

Biden and Klain both supported the office when Biden was vice president and Klain was his top staffer, said the office’s first leader.

“Biden was more encouraging of the office than President Obama was,” said veteran U.S. Supreme Court litigator and Harvard Law School professor Laurence Tribe, who in 2010 was appointed as the office’s first senior counselor for access to justice.

Biden and Klain reached out to Tribe when he ran the office more than once to offer their support—and Klain’s backing hasn’t waned, he said.

“I know he’s very supportive of it,” said Tribe, who spoke with Klain about the office just before the 2020 election.

Four other sources, who spoke on condition of anonymity, told Bloomberg Law that the stars soon may be aligned for a newly funded office to pick up the work of the old unit.

A revived Office for Access to Justice within DOJ could play directly into several of the Biden-Harris administration’s seven “Immediate Priorities,” including providing economic relief and mitigating the damage caused by Covid-19, by helping ensure legal representation for domestic abuse victims and those facing evictions and job losses.

The push to reinstate the office—shuttered by former Attorney General Jeff Sessions in 2018 after an eight-year run—began during the presidential transition period. In a December letter, the ACLU, the Association of Pro Bono Counsel, and the National Association of Criminal Defense Lawyers joined 45 other groups urging the Biden transition team to revive the office.

“The reestablished office could resurrect its interagency work within DOJ and across federal agencies to address pandemic-related civil justice problems for millions of Americans,” the groups said in the letter.

The letter was written by Maha Jweied, the office’s final acting director, and Karen Lash, a former acting senior counselor of the office. The pair, currently with the Center for American Progress, a progressive think tank in Washington, also have advocated on the issue for CAP.

Punching Above Its Weight

The effort to resuscitate the DOJ office also comes as states like Arizona and Utah have been making their own changes to legal services ownership regulations—often touting the same stated goal of ensuring broader access to courts.

The staff of about 10 lawyers and one or two administrators advocated for reduced or eliminated court fees and fines; doled out grants to state programs; and penned dozens of “statements of interest,” similar to amicus briefs, in Justice Department suits.

The office joined DOJ’s Civil Rights Division in filing a statement of interest in Wilbur v. City of Mount Vernon, a class action alleging that indigent, misdemeanor defendants had been systematically denied effective assistance of counsel in certain cities. A U.S. district judge in Seattle agreed, ordering the cities in 2013 to hire a part-time public defender supervisor.

The office spurred Obama to create the White House Legal Aid Interagency Roundtable (LAIR), which brings together officials from more than 20 executive agencies to share best practices and help fill gaps regarding how individual agencies handle legal aid and indigent defense issues. LAIR survived the office’s shutdown, but its meetings currently have far fewer attendees than in years past, according to reform advocates.

“The office filled an extremely important role in addressing the lack of resources and lack of knowledge about access issues,” said Perrelli, now Jenner & Block’s chair in Washington. “It was a small office that punched way above its weight.”

Sen. (R-Okla.), and former Rep. Bob Goodlatte (R-Va.) were among the offices detractors, who said DOJ was duplicating efforts of groups like the Legal Services Corp. In a 2018 op-ed in The Hill, the pair accused office leaders of directing millions of dollars in settlement funds away from victims to political allies and other “preferred third-party organizations instead.”

Sessions, Lankford, and Goodlatte could not be reached for comment.

The number of litigants without lawyers in state-level civil cases has steadily risen over the last several decades. Although criminal defendants are constitutionally guaranteed the right to an attorney, many public defender offices are woefully underfunded, unfairly leaving many without effective representation, advocates say.

“The justice gap is extraordinary, and the awareness gap is even bigger,” said Lash.

Gupta’s April 21 Senate confirmation may prove to be a key moment in the push to reinstate the office.

She was a vocal supporter of the original access to justice office from her perch as head of DOJ’s civil rights division during the Obama administration. She’s publicly backed reinstating the office since then, as president and CEO of the Leadership Conference on Civil and Human Rights. 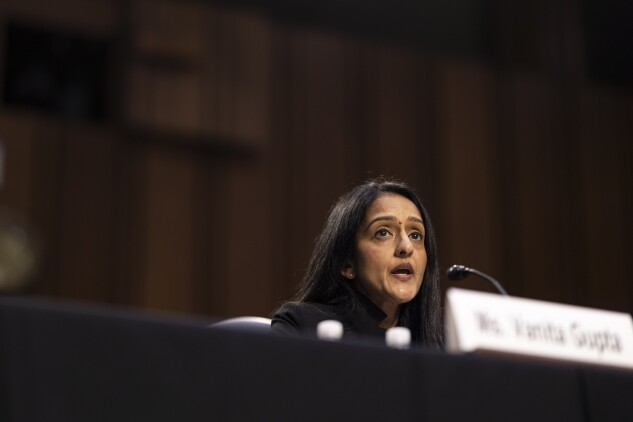 Backers of the office have congressional allies in House Judiciary Committee Chair (D-N.Y.) and Sen. (D-Conn.), who proposed a bill late last year to expand the office’s purview.

That bill is likely to be reintroduced—this time with the White House’s backing and at least some Republican support, said a Democratic congressional aide who spoke on condition of anonymity.

Sen. Lisa Murkowski (R-Alaska) was the only Republican senator to vote for Gupta. Murkowski said she decided to support Gupta after an “extensive sit-down,” during which the two shared their mutual support for access to justice and related issues.

To contact the editors responsible for this story: at csaenz@bloombergindustry.com; at copfer@bloomberglaw.com