Once a member of the Big Five accounting firms, Arthur Andersen's entanglement in the Enron affair led to its conviction by a Houston jury in 2002, effectively putting it out of business.
Photographer: Paul Cooper/Bloomberg News

The collapse of Enron, which filed for bankruptcy protection 20 years ago today, shook the capital markets and led directly to the demise of Arthur Andersen, the auditing firm that approved Enron’s annual statements and accounting acrobatics. The scandals led to new rules and laws for corporations and auditors that were meant to prevent future frauds of such massive scale.

Two decades later, no similar blowups have occurred in U.S. markets. But it’s not clear that investors are any safer today than they were before Enron Corp. failed. 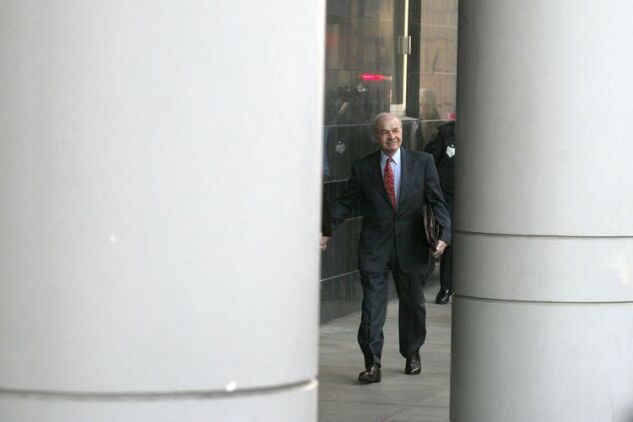 At the time of the Enron fiasco, Andersen had already been enmeshed in frauds at , , and the . Soon an even bigger fraud would emerge at WorldCom, another Andersen client. In the wake of the Waste Management collapse, the U.S. Securities and Exchange Commission hit Andersen with a $7 million fine, sanctioned four partners, and issued an injunction against any further violations of securities laws.

Once the Enron fraud began to emerge, Andersen’s Houston office quickly activated its “document retention policy,” shredding Enron work papers in advance of an SEC inquiry. As public outrage grew, the Justice Department charged the firm with obstruction. In settlement talks, prosecutors insisted that Andersen admit to some form of wrongdoing. Andersen’s management refused, maintaining that the firm had not broken any laws. A Houston jury convicted Andersen in 2002, effectively putting it out of business. 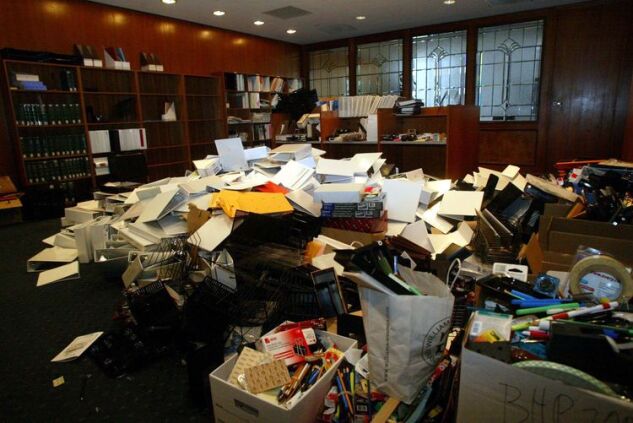 Piles of office supplies inside the Houston offices of Arthur Andersen in 2002.
Photographer: James Nielsen/AFP/Getty Images

The Andersen prosecution rattled the other firms in an industry that had morphed from watchdogs to enablers of fast and loose accounting practices. The 2002 Sarbanes-Oxley Act, a wide-ranging law to strengthen auditors’ oversight, added to the pressure on corporations to avoid reporting dodgy numbers. For a few years, the specter of Andersen’s fate injected a rigor into its peers’ audits that had previously been absent. Earnings restatements rose in 2003, 2004, and 2005, a sign that the act’s accounting reforms, coupled with emboldened auditors, were curing corporations of bad practices.

But in 2005 the Supreme Court reversed Andersen’s conviction, embarrassing the Justice Department, which had essentially shut down a global firm with 85,000 employees. From 2005 onward, it was clear that the government would be wary of any prosecution that could further reduce the ranks of the Big Four: , , , and .

A criminal investigation of KPMG LLP over the structure and sale of abusive tax shelters, which could have mortally wounded the firm, resulted in a deferred prosecution agreement in 2005. Even the infamous accounting gimmick employed by Lehman Brothers to hide its leverage from investors—known as Repo 105—ultimately went unpunished by the SEC, although New York state extracted $10 million from Ernst & Young after Lehman’s September 2008 bankruptcy filing. “You have four international behemoths,” says , chief accountant of the SEC from 1998 to 2001. “They act and operate as though they’re too big to fail, and regulators are fearful of going out and doing anything about it.”

The Big Four can point to the absence of any WorldCom-size accounting frauds in the past decade as proof that the industry has mended its ways. But the exposure of false or misleading filings by , Under Armour, and in recent years demonstrate that the system isn’t perfect.

In the 1990s the big accounting firms bolstered their revenue by offering a variety of business consulting services to their audit clients. Since the auditors had such a good grasp of their clients’ business operations already, the thinking went, they would also be best positioned to help those clients in other areas of their businesses.

The expanded business relationship also gave the clients leverage over their auditors. Nowhere was that more apparent than in Andersen’s relationship with Enron. In 2000, Enron paid the firm more than $1 million a week to serve as its auditor and internal business adviser.

That same year, SEC chairman proposed a rule that would have forced accounting firms to choose between serving as auditors or consultants to their clients. The accounting lobby in Washington fought back aggressively, getting members of Congress and prominent business figures to write letters to the SEC in opposition. After the Enron collapse, as a reporter at USA Today, I filed a Freedom of Information Act Request with the SEC to obtain those letters. Among them was one from Enron Chief Executive Officer to Levitt, dated September 2000, praising the fine work that Andersen provided his company as both auditor and consultant. “Enron has found its integrated audit arrangement to be more efficient and cost-effective than the more traditional roles of separate internal and external auditing functions,” Lay wrote.

Sarbanes-Oxley limited the types of services that auditing companies could offer. Three of the Big Four sold off their consulting units. Over the past decade, though, the firms reversed course, acquiring consulting firms to expand their revenue sources, once again building conflicts of interest into the system. Sarbanes-Oxley also created a new regulator, the . For more than a decade, the board was an adequate overseer. That changed during the Trump administration, when a newly installed board began finding fewer problems with audits done by the accounting giants. Investor advocates criticized the PCAOB, headed by a political aide who had no expertise in auditing, as too industry-friendly. , the Biden administration’s SEC chair, has .

Several developments have made the auditors’ job harder. As the top global companies have grown dramatically in the past 20 years, accounting firms have come to rely more heavily on technology to do their work, taking batches of raw data from clients at prearranged times and feeding it all into customized analytics programs. Accounting firms are also offshoring, much as their largest clients have. The Big Four all have offices in such places as Bengaluru, India, where they can grind out routine tax work and audit-related number crunching that would cost more in the U.S.

That reduces direct contact between auditors and corporate executives, which used to be a crucial part of the process. And Covid-19 has accelerated that trend. Remote meetings between the auditors and their client counterparts are now the norm. Industry veterans express concern about the lack of face-to-face meetings at the client’s work sites. In many cases, the auditors no longer have casual conversations with managers and clerks on the front line, people who once might have rolled their eyes at some of the numbers claimed by management but are now cut out of the process altogether. “Remote auditing is clearly a challenge,” says Debbie Cutler, who teaches courses on ethics for the New York State Society of Certified Public Accountants. “It’s one thing to have Zoom meetings, but there’s nothing like face-to-face.”

Cryptocurrencies pose a new danger. “Blockchain is geared toward anonymity,” says Brian Loughman, a partner at Floyd Advisory LLC, who was an Andersen partner from 1999 to 2002. “Everything auditors do—from verifying assets, as well as reviewing rights and obligations, as well as valuation—involves traditional methods of third-party confirmation. Crypto doesn’t allow you to do that.” Until the SEC and other regulators come up with specific rules and guidelines involving crypto disclosures, the area will prove challenging for audit firms, Loughman says.

Accounting blowups tend to occur in prolonged market downturns, such as the bursting of the dot-com bubble that preceded the collapse of Enron and WorldCom. Last year’s Covid downturn proved an exception, in part because it was so brief, with the U.S. government pumping rescue money into almost any company that asked for it. When a real recession arrives, beware. “Every 30 years or so, the accounting profession blows itself up,” says Turner. “Sometime in the next 10 years, the profession will blow itself up again.”

To contact the author of this story:
in New York at gregfarrell@bloomberg.net

To contact the editor responsible for this story:
at egelman3@bloomberg.net