Sitting calmly in front of a bookshelf filled with thick volumes of the “Federal Reserve Bulletin,” this week set out to offer a simple explanation for the complicated steps the U.S. central bank is taking to relieve dire stresses in the global financial system.

“Many places in the capital markets, which support borrowing by households and businesses -- I’m talking about mortgages and car loans and things like that -- have just stopped working,” the Fed chair told NBC’s “Today” show, in a rare television interview. “So we can step in and replace that lending under our emergency lending powers.”

Powell’s typical mild-mannered delivery belied the historic actions underway to put out various fires raging in the financial system because of the novel coronavirus pandemic. The system is still far away from normal, and troubling stress points remain. However, this week it became clear that the rapid response alleviated a variety of issues that threatened to exacerbate economic damage being inflicted by attempts to halt the spread of the virus.

“If there’s one thing I’ve learned in my 20 years of trading it’s that you don’t fight the Fed,” said , chief market strategist and former trader at independent broker-dealer Incapital. “Not if the Fed is a buyer, and especially not a Fed that is going to buy unlimited amounts.”

The central bank added more than $1 trillion to the system in recent weeks, with untold trillions still to come. The effort underscores the main lesson policy makers learned from the 2008 experience: Act fast and go big. 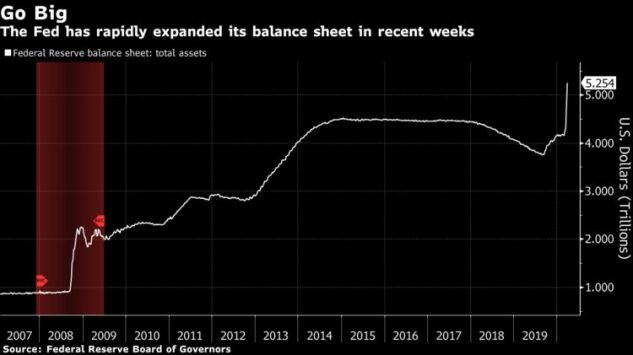 Unlike that crisis, in which the Fed focused solely on propping up the banking system, the central bank’s support is much more widespread this time around. And for good reason: almost every sector of fixed income, from Treasuries to municipal bonds to money-market mutual funds, has come under stress this month.

In the last two weeks alone, the central bank has purchased $942 billion in Treasuries and mortgage-backed securities, dwarfing its previous efforts and restoring a semblance of order to those markets. The Fed this week also provided more than $50 billion in cheap loans to banks through its discount window. 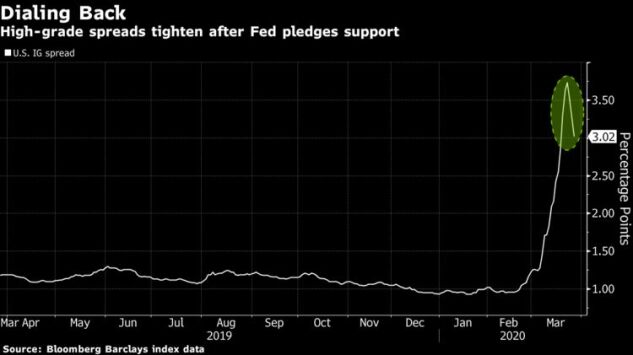 Its Primary Dealer Credit Facility, which takes as collateral investment-grade corporate bonds, municipal debt and mortgage- and asset-backed securities in exchange for cash loans, provided $27.7 billion as of Wednesday. Its Money Market Mutual Fund Liquidity Facility, which finances purchases of assets from U.S. money market funds, added another $30.6 billion. Borrowing by foreign central banks soared to $206 billion -- the highest since 2009.

The most-obvious sign of success in easing financial stresses can be seen simply in exchange rates for the dollar itself. Intercontinental Exchange Inc.’s U.S. Dollar Index, a measure of the U.S. currency against major counterparts, ended last week at a three-year high in a reflection of the overwhelming global demand for dollars from corporations and investors. This week 4.3%, the most since 1985, as the Fed’s liquidity flowed around the world.

The market for high-grade corporate bond saw a massive turnaround, especially in shorter-dated securities that the Fed has pledged to buy in essentially unlimited quantities. Credit risk, as measured by derivatives indexes, eased nearly and encouraged a rush of issuance that was met with strong demand.

“The tools are in place, now you need to run the machine,” said , chief investment officer of fixed income for Voya Investment Management. “You need time for system to heal, and it is healing.”

It hasn’t all gone smoothly. The Fed’s Friday afternoon that it will slow the pace at which it buys Treasuries was blamed by some for extending losses in stocks that afternoon, with the Standard & Poor’s 500 Index trimming its best weekly advance since 2009 to 10%. The equity benchmark is still down 25% from its last record in February.

And the Fed’s efforts aren’t a panacea to cure all the system’s ills. The crucial U.S. commercial paper market, which many businesses turn to for short-term funding sourced from money market funds, remains . The spreads between commercial paper interest rates and overnight index swaps -- the so-called risk-free rate -- are at records. A program meant to aid that market won’t become operational until the first half of April. 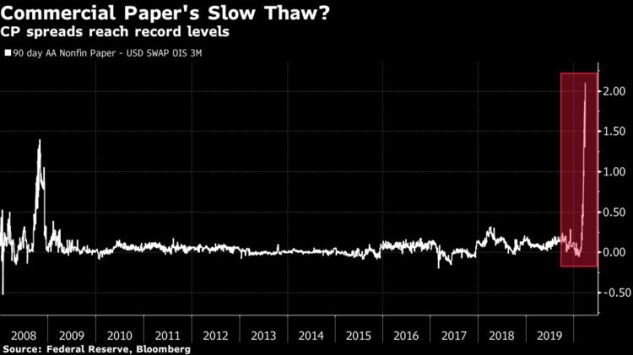 “There are very encouraging signs of a thaw but we’re not quite there yet,” said , head of U.S. interest rates strategy at Bank of America Corp. “As soon as money funds become more comfortable on where their asset base is, then they can start spending. This is the first step on getting the wholesale funding market started again. We’re still far from normal but a lot of the illiquidity has already come out.”

It’s also unclear to what extent the Fed’s efforts will help riskier areas of debt markets like high-yield bonds and leveraged loans, which the Fed isn’t buying. Those parts of leveraged finance could see rise to 15% this year and next, according to Fitch Ratings. The biggest buyers of leveraged loans, collateralized-loan obligations, are also , further delaying a recovery to the underlying asset class.

The Fed’s move to buy an unlimited amount of mortgage-backed securities with government backing has helped support that market, but the program doesn’t apply to the smaller market for private-label MBS that’s not sponsored by government-linked agencies. Those bonds, which include debt issued even before the 2008 financial crisis, have been under pressure amid concerns that millions of borrowers could fall behind on payments as the economy grinds to a halt.

The revival of the Fed’s Term Asset-Backed Securities Loan Facility may help support the market for asset-backed securities backed by consumer debt. In that program, the Fed will purchase top-rated newly issued notes backed by debt like small business loans, credit card debt and auto loans. Risk premiums on those bonds have widened to near 2008 crisis levels as investors sell to meet redemptions and fret over borrowers’ ability to pay.

Investors in riskier debt products may see more of an impact from Congress’s $2 trillion fiscal-stimulus package that’s meant to bolster the real economy. The hope is that as governments take action and rates are slashed across the world, investors will gradually return to put money into funds that buy riskier debt. But so far, it’s been consistent weeks of outflows, even in higher-quality .

“You need the plumbing of the credit markets to work and the Fed has helped significantly on that front,” said , co-head of Wells Fargo Asset Management’s U.S. high yield fixed income team. “But you also need a functioning economy.”