The headquarters of the U.S. Securities and Exchange Commission in Washington, on Dec. 22, 2018.
Photographer: Zach Gibson/Bloomberg

A highly anticipated plan by the on global warming will demand companies account for some pollution they don’t emit themselves, according to people with knowledge of the matter, setting up a major clash over the financial regulator’s role in environmental policy.

The SEC’s push to make companies disclose greenhouse gases that are generated by other firms in their supply chain or by customers using their products will be embraced by climate activists who have been counting on the commission to deliver a tough rule. Such emissions, known as scope 3, make up the bulk of most companies’ pollution.

Businesses, however, have long contended that unlike, say, the fuel or electricity they use, scope 3 emissions are extremely challenging to quantify. The SEC’s move to order their disclosure virtually ensures the regulator will be sued to block the new rule.

Even so, Charlotte Jenkins, a research analyst who closely follows the issue at Beacon Policy Advisors in Washington, said it behooves the SEC to push the proposal as far as it can. Liberal lawmakers and environmental advocates have been ratcheting up the pressure on the agency, even as corporate America and Republican politicians dig in against it, she added.

“Litigation is inevitable, no matter what the substance of the rule is,” Jenkins said. “The expectation from the Democratic party is they have to try.”

The climate proposal, to be released by the SEC on Monday, is a centerpiece of the Biden administration’s efforts to slow the planet’s rising temperature. The commission’s work has taken on even more significance in recent months as other White House clean energy initiatives have been shot down in Congress.

An SEC spokesperson declined to comment on the pending plan, which is still being reviewed ahead of the meeting and could change.

Inside the agency, progress on the rule was bogged down for several months due to a squabble between Chair and his fellow Democratic commissioners over whether to add the indirect-emissions provision -- an aggressive step that would fuel the expected lawsuits. 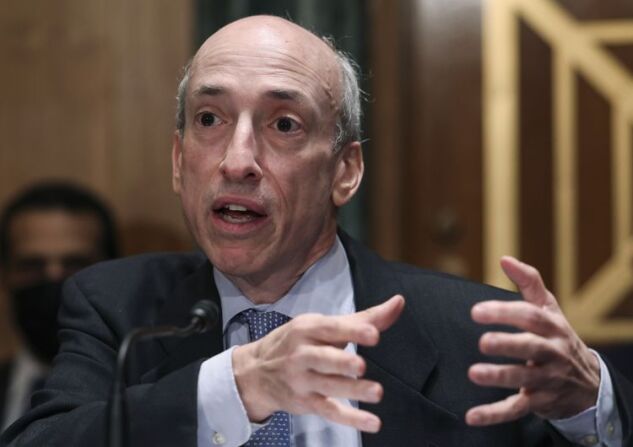 Many Republicans argue that the SEC’s push on climate rules is akin to regulating global warming, something they contend is outside the agency’s jurisdiction over corporate disclosures. Business groups have already been discussing a litigation strategy. Some state officials have also pledged to take the SEC to court.

In a demonstration of the fraught political atmosphere, seven Republicans on the House Financial Services Committee fired off a letter to Gensler dated Friday urging him to cancel next week’s meeting. The lawmakers said the planned vote on the proposal by SEC commissioners was “a remarkably tone-deaf act” in light of rising energy prices following Russia’s invasion of Ukraine.

The upcoming rule “is not truly an attempt to provide financially material information to investors,” the Republicans, led by Representative of Michigan, wrote. “The real intent is to fight climate change.”

Within the SEC, the agency’s internal conflict turned on the definition of “materiality,” a legal concept that governs how much information companies must disclose to investors. The term is vague under the securities laws, and federal judges have never established a clear guideline. The regulator’s own position is also murky, saying material information is that to “which there is a substantial likelihood that a reasonable investor would attach importance.”

In some instances, it’s clear that information is material, such as a business’s plans to make a big acquisition. But assessing the impact of things like emissions from its employees’ commutes is much harder.

Gensler, concerned about the rule being invalidated by a lawsuit, for a more narrow disclosure regime, telling the agency’s staff that any regulation should conform to Supreme Court precedent on materiality. Commissioners and disagreed, saying that would likely preclude reporting on scope 3.

The SEC plan coming Monday looks to split the difference, the people familiar said. It calls for firms to detail indirect emissions that are “material” to their operations. Because of the legal uncertainty surrounding the term, the proposal is likely to provide examples for companies to follow, the people added.

The commissioners also compromised on whether the new corporate filings will need to be audited, another flashpoint. The regulation is likely to require expert review, but it will be phased in over time, the people said.

While all three Democrats are expected to back the proposed rule, the vote is only the first step in the process. After a period of public comment, the agency may revise the plan. Democratic lawmakers are eager for the SEC to finalize the rule this year.

There is a chance that the scope 3 requirement may not make the final rule. Lee, who pushed hard to include indirect emissions, announced this week she would be stepping down once the Senate confirms a successor.

The SEC’s lone Republican, , is expected to vote against the climate rule.

(Updates with Republicans’ letter to Gensler in ninth paragraph.)

To contact the reporter on this story:
in Washington at rschmidt5@bloomberg.net