The U.S. Chamber of Commerce has been challenging an SEC rollback of Trump-era curbs on proxy advisory firms.
Photographer: Andrew Harrer/Bloomberg via Getty Images

The SEC is facing new legal concerns over easing Trump-era curbs on proxy advisory firms after a computer problem prevented the agency from receiving public feedback on several rules under consideration.

The US Chamber of Commerce recently asked the Securities and Exchange Commission for any documentation it has about whether the glitch affected the proxy rollback, according to a letter shared with Bloomberg Law. The letter came after the SEC said a “technological error” forced it to reopen several rulemaking comment files. The updated proxy firm rules were absent from the announcement.

The Chamber has sued the SEC over the new rules, which scrapped 2020 requirements intended to restrict , Glass, Lewis & Co. and other advisory firms that recommend how investors should vote at companies’ annual meetings. More information about the SEC’s deliberations on the recent tech glitch would “potentially benefit” a judge evaluating the Chamber’s claims the agency overstepped its authority and violated rulemaking procedures in rolling back the 2020 rules, according to the business group’s letter.

“If there are procedural flaws involved, I mean, that’s something that the courts need to be made aware of,” Thomas Quaadman, executive vice president for the Chamber’s Center for Capital Markets Competitiveness, said in an interview.

A failure by the SEC to receive and process comments on the updated proxy voting advice rules would violate the Administrative Procedure Act, the Chamber said in its letter. The law governs agency rulemaking and is a focus of the group’s lawsuit, which it brought in July in the US District Court for the Middle District of Tennessee.

But convincing a judge of impropriety by the SEC could prove challenging for the Chamber, if it decides there are concerns to bring up in court. Courts assume agencies make rules in good faith and proving the opposite to judges is hard, said Richard Pierce, a George Washington University Law School professor who studies government regulation.

“It’s pretty rare when an agency lies about something,” Pierce said. “But if they get caught, if there’s real solid evidence that they’re lying, that changes the whole entering posture of the judges, and they’re just much less sympathetic.” 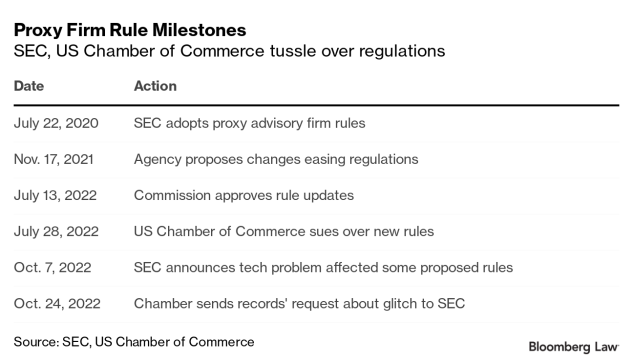 The agency said on Oct. 7 it conducted a review and found a glitch that dates from June 2021 prevented it from seeing comments on a dozen commission rulemaking initiatives, as well as eight items proposed by stock exchanges, the Financial Industry Regulatory Authority and Options Clearing Corp. The matters included the SEC’s climate disclosure and cybersecurity proposals, among other items.

The SEC gave the public until Nov. 1 to send in any feedback that was missing from agency’s online comment files on the rulemaking matters.

The new proxy firm rules were among more than a dozen regulations the SEC proposed since June 2021 and had comment periods that stayed closed.

The SEC proposed the updated proxy firm regulations in November 2021 and adopted them in July. The rules drew dozens of comments, including from the Chamber and the National Association of Manufacturers, which also sued the agency over regulations it said were unwarranted.

The agency wouldn’t hide a tech problem with the rules if it encountered an issue, said Elisse Walter, a Democrat who chaired the SEC during the Obama administration.

“It would be out of the question,” Walter said.

The Chamber’s request for more information about the glitch, made through the Freedom of Information Act on Oct. 24, is part of a years-long battle between businesses and proxy firms over the voting advice given to pension funds and other large investors. The proxy firms’ clients often listen to their recommendations, giving them great power in votes on directors and environmental, social, and governance issues, among other matters.

The decision by Biden appointee Gary Gensler to drop the requirements two years later led to the related lawsuits from the Chamber and the National Association of Manufacturers. ISS also is challenging the SEC in court over the rules, saying they improperly kept it in a more restrictive regulatory regime for shareholder activists.

The Chamber in its FOIA letter asked the SEC for “expedited processing” of its request for any records on the glitch, as the group’s court case continues to move ahead. The group also wrote directly to Gensler on Nov. 1, asking for more details about any connection between tech error and the new proxy firm rules.

The agency would have committed “regulatory malpractice” if it knew the glitch affected comments about the regulations and it made no public amends, Quaadman told Bloomberg Law.

“What information did they get? When did they get it? Were they able to take that into consideration?” Quaadman said. “That’s all very foggy right now.”