A sign is posted on the exterior of Uber headquarters in San Francisco. Uber, Walmart Inc., and the World Economic Forum support corporate climate risk disclosures and have spoken directly with the SEC in recent months.
Justin Sullivan/Getty Images

More than 20 companies, business groups, and other organizations have met with the SEC this year as the agency considers mandatory disclosures on climate risks and other environmental, social, and governance matters.

Uber Technologies Inc., Walmart Inc., and the World Economic Forum support corporate ESG disclosures and are among those that have spoken directly with the Securities and Exchange Commission in recent months, according to a Bloomberg Law review of agency records. Walmart and Uber are already releasing information about their greenhouse gas emissions and sustainability goals.

Skeptics are lining up, too. The U.S. Chamber of Commerce, which has publicly warned against expansive ESG disclosure requirements, also met with SEC officials recently, records show.

The stakes are high. President Joe Biden last week directed the Financial Stability Oversight Council, which includes the SEC, to come up with a plan to improve climate disclosures. A mandatory reporting system from the SEC could be a “seismic shift” in corporate disclosure, said Keir Gumbs, Uber’s deputy general counsel and deputy corporate secretary, who met with commission officials on climate disclosures.

The SEC hasn’t conversed with this large of a constituent group on a potential regulation since it proposed market data infrastructure rules in 2020. The agency last year issued more than a dozen proposals, most garnering 10 or fewer meetings.

“A lot of people see how important this topic of discussion is and want to be part of the process,” said Gumbs, a former SEC counsel.

The World Economic Forum, known for gathering business and political leaders in Davos, Switzerland, has gone as far as releasing a set of ESG metrics that BP Plc, Dow Inc., and International Business Machines Corp. and dozens more companies have endorsed. The metrics are based on existing voluntary standards concerning emissions, board diversity, and pay equality, among others.

The SEC has prioritized work to enhance ESG reporting under President Joe Biden. The agency in March began asking the public for feedback on topics such as climate risk disclosures and the possibility of an ESG standard setter, triggering a rush of corporate executives to the SEC.

Most, if not all, of the SEC’s meetings so far with private-sector interests have included Kristina Wyatt, the agency’s new senior counsel for climate and ESG in its Division of Corporation Finance, which will take a leading role in any disclosure rulemaking. She’s often joined by John Coates, the division’s acting director. Sometimes, Satyam Khanna, the SEC’s senior policy adviser for climate and ESG, is there, too.

Public records from the meetings don’t provide detailed descriptions about what was discussed. But they show SEC officials spoke with a variety of company executives, lawyers, and other advocates, sometimes communicating with several representatives at multiple organizations in a single day.

Democrats and investor advocates have complained for years about companies’ vague and inconsistent ESG reporting. Republicans and some business community members, however, have questioned the usefulness of various ESG data in making investment decisions.

The U.S. Chamber of Commerce met with the SEC on the topic in April. Earlier this month, the group released a letter to SEC Chairman Gary Gensler that warned ESG disclosures shouldn’t go beyond what average investors deem important.

“We look forward to continuing to be a constructive partner as the process continues,” Evan Williams, director of the U.S. Chamber’s Center for Capital Markets Competitiveness, said in a statement.

“They’ll have an impact,” Coates said at a conference last month. “There are a variety of choices that will need to be made.”

Uber was one of the first companies to submit a comment letter to the SEC.

In its letter, the ride-hailing company praised the SEC for the agency’s interest in harmonizing various voluntary corporate climate disclosures. According to Uber, the SEC could create an effective and comparable reporting system by incorporating disclosure and accounting standards from two nonprofit organizations—the Task Force on Climate-Related Financial Disclosures, which was created by the Financial Stability Board; and the Sustainability Accounting Standards Board.

TCFD and SASB have created voluntary reporting frameworks for greenhouse gas emissions, climate risk, and other ESG topics that Uber and other companies use. SASB has met with the SEC at least three times on climate disclosures in recent months.

Uber’s Gumbs said his meeting with SEC officials reflected what was said in the company’s letter. The agency has received several dozen comments from the public so far and is expected to get many more.

“My personal hope for all of this is that this process is going to elicit some good information as they put together their rulemaking,” he said. 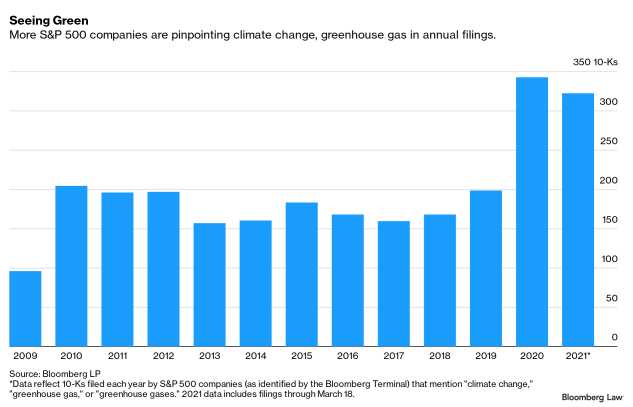 Walmart also has been active with its ESG-related advocacy, meeting at least twice this year with the SEC.

David Chojnowski, Walmart’s principal accounting officer, and Kathleen McLaughlin, the company’s chief sustainability officer, are among those who spoke with agency officials.

Like Uber, Walmart uses the reporting systems from SASB and TCFD.

“Walmart is doing its part to confront climate change, and we welcome the opportunity to meet with the SEC and discuss more robust, rigorous, and comparable ESG disclosures,” Walmart spokesman Randy Hargrove said.

The World Economic Forum is another proponent of TCFD and SASB.

The SEC officials who met with Eltobgy and her colleagues were receptive to learning from them about their ESG metrics, she told Bloomberg Law. Stakeholder Capitalism Metrics, as they’re known, incorporate SASB and TCFD disclosures.