stock price has been on a tear during the coronavirus crisis, but behind the scenes the online retailer is locked into a pitched battle with Wall Street over its controversial plans to issue a first-of-its-kind digital dividend.

The fight stems from Overstock’s demand to control where the new securities are allowed to trade, rather than letting investors buy and sell them wherever they choose. Earlier this month, the company sent a letter to a number of financial firms reminding them that it expects all trading in the dividend to take place on a venue called , which Overstock owns. 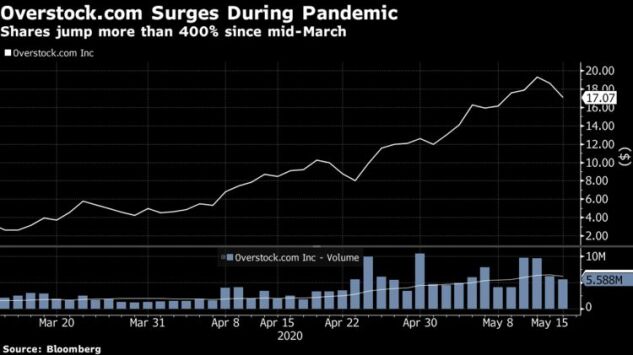 The retailer’s lawyers reiterated the requirement during a conference call with brokers that industry executives say quickly devolved into threats of lawsuits, though Overstock disputes that any such warnings were made. The tensions are coming to a head just as the dividend, which will give investors one preferred share for each 10 common shares they own, is set to be issued on Tuesday. Overstock says some records for the security will be be stored on the but maintains that it is not a new virtual currency.

If Overstock’s dividend plan proves successful, the implications for U.S. markets could be significant. More companies may decide to dabble in digital assets or add restrictions to their shares, especially if they find that doing so gives them more sway over their investors. On Wall Street, brokerage firms and are loath to see the launch of any security that raises the specter of a monopoly and could cut them out of trading and listing fees.

The question of whether a company can dictate where investors are allowed to sell their stock has attracted attention from the , which has long been focused on ensuring that shareholders get the best execution for their trades at low prices. While the regulator signed-off on Overstock’s dividend following an extensive review, it’s aware of the dispute around tZERO and may weigh in, said people with knowledge of the matter.

“This raises fundamental questions about the rights of shareholders,” said , an associate professor at Georgetown University’s business school who owns some Overstock shares and follows the company closely.

In an emailed statement, Salt Lake City-based Overstock said that it’s perfectly legal for the company to restrict trading to its own platform, adding that it hopes market participants adhere to the mandate. “If not, like any security issuer, we will take necessary action to ensure compliance with the terms of the security,” the company said.

SEC scrutiny of Overstock’s dividend isn’t new. The company has said that it received a subpoena from the regulator last October demanding documents about the security, as well as the stock trading plans of Overstock executives and directors. In a May 7 regulatory filing, the company said it is fully cooperating with the request.

Overstock’s dustup with Wall Street comes amid a turnaround for the company, which is benefiting from homebound consumers needing to shop from their couches. Its shares have jumped more than 400% since mid-March, making the company one of the U.S.’s top performers. The rally a 48% drop for Overstock last year and a 79% plunge in 2018.

Broker and exchange complaints about the digital dividend are wide-ranging. They say limiting trading to one venue will hurt liquidity, making it difficult and expensive for investors to sell their shares. The one brokerage doing business with tZERO, called , plans to charge a 1% fee, according to an April news release. That’s a stark contrast to the free trades offered by many retail brokers. Dinosaur is run by , whose son is a tZERO executive.

Overstock said it’s not unusual for professionals in the financial industry to have family ties. A spokesman for Dinosaur declined to comment.

Overstock’s dividend already has a trading symbol, OSTKO. There has been some buying and selling ahead of its official issuance, but those transactions will settle after the shares are given out.

, an electronic trading firm that is the nation’s biggest market maker for over-the-counter securities, has traded the new dividend and was one of a number of companies that got a letter from Overstock’s lawyers on May 7. The restriction, GTS Chief Executive Officer said, violates the principles of free and fair markets and makes it very challenging for his firm to ensure it is getting the best price for clients.

“This is flatly against everything we believe in,” Rubenstein said. “America’s market system is not based on dictating the trading venue and charging exorbitant fees.”

GTS got clearance on Friday from the , the frontline overseer for brokers, to trade the dividend. The approval deals a potential blow to Overstock.

recently sent a note to its customers with Overstock shares telling them they couldn’t trade the dividend through the firm. Clients wishing to buy or sell the securities “will need to make other arrangements,” the letter said.

The online merchant’s plans for the dividend have sparked controversy since they were first unveiled in mid 2019. The company has said it created the security partly to push Wall Street toward blockchain technology -- an obsession of outspoken founder . He left Overstock last year amid a scandal over his romantic involvement with alleged Russian spy , a conservative gun aficionado who was imprisoned after failing to register as a foreign agent.

Overstock is seeking to boost tZERO’s business by restricting trading to the platform. It has said the dividend has the potential to introduce tens of thousands of new investors to the venue, which is devoted to digital tokens.

Critics claim that another motivation is thwarting short sellers who Overstock has fought with for years. That’s because traders betting against the company would be obligated to deliver the digital dividend to brokers they had borrowed shares from. But the perceived difficulty of doing that has prompted many to close out their short positions instead, according to market participants. The company’s stock price soared in the weeks after it announced the dividend last year.

In its statement, Overstock said that the dividend would have no impact on short selling.