just agreed to pay as much a $10.9 billion to settle most of the legal headaches inherited with the takeover of Monsanto two years ago. That marriage, which followed a two-year courtship and cost Bayer a quarter of its value, didn’t start out as rocky. Here are key highlights of its history:

As took the helm of Bayer, mergers and acquisitions were already reshaping the agricultural-products industry. Feeling the pressure, Bayer approached Monsanto, itself a target after failing to buy a rival. Shares immediately slumped on concern Bayer would be financially stretched by such a giant deal. 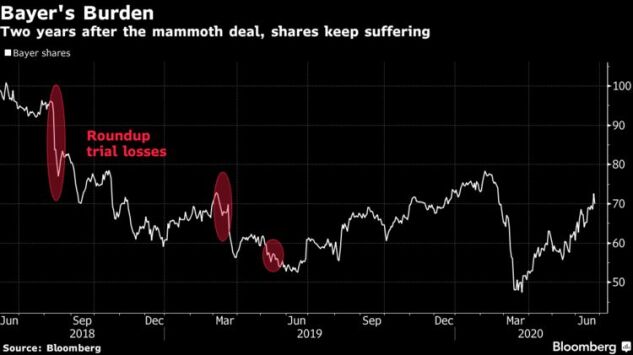 After bumping its offer price, Leverkusen, Germany-based Bayer secured a that would turn it into the world’s biggest supplier of seeds and pesticides. The agreement included a $2 billion breakup fee.

The transaction started off well. The Committee on Foreign Investment in the U.S. had taken a long, hard look at China’s acquisition of Switzerland’s Syngenta on national security grounds. By contrast, Bayer sailed through its review unscathed.

Antitrust regulators insisted that Bayer sell chunks of its existing agro-chemical and seed businesses worth 7.6 billion euros ($8.6 billion) in return for approval. Germany’s , which had been waiting in the wings, jumped at the opportunity. Bayer had to part with prime assets, creating a much stronger competitor right in its backyard.

U.S. antitrust regulators became the last major authority to after the biggest divestment package ever in a U.S. merger enforcement case, paving the way for the takeover to be completed the following week.

Just two months after Bayer clinched the deal, a court in California ruled in favor of a former school groundskeeper who alleged Monsanto’s glyphosate-based weedkillers, including the flagship Roundup brand, had been the cause of his cancer. The to go to trial resulted in $289 million in damages. Baumann and his legal team were aware of a controversy around glyphosate, but banked on a lack of scientific evidence establishing Roundup’s risks. Bayer, like Monsanto before it, insisted the popular herbicide was safe.

Another Roundup setback took place when a federal court awarded compensation and punitive damages totaling more than $80 million to a 70-year-old California man who became ill after spraying the herbicide on his property for decades. Bayer again vowed to “vigorously defend” Roundup, but it was an ominous sign, ramping up the pressure to settle.

A bruising moment at Bayer’s annual shareholder meeting, when Baumann and other managers of confidence. In what’s usually a formality at such gatherings, 55% of investors expressed their mistrust in the CEO, prompting an immediate supervisory board meeting. Similar rejections have cost German CEOs their jobs, but Baumann soldiered on with the backing of Chairman Werner Wenning.

In the third U.S. trial to make it to court, a Californian couple who had been using Roundup for three decades were awarded $2 billion in damages, bringing Bayer’s shares down more than 40% since the deal was cemented. The company called the ruling “unjustifiable.” It’s appealing all three lost suits.

With the number of glyphosate lawsuits swelling to about 18,400 in the U.S., Baumann said he’d consider a “financially reasonable” . Management also engaged in a mediation process ordered by a district judge in California.

The company agreed to make a payment of to resolve about three-quarters of the existing Roundup lawsuits and address potential future ones, capping months of efforts to bring its herbicide woes to a close.

To contact the reporter on this story:
in London at anoel@bloomberg.net

To contact the editors responsible for this story:
at kwong11@bloomberg.net