The former co-chairman of Willkie Farr & Gallagher LLP pleaded guilty to conspiracy and faces the possibility of going to prison after admitting he bribed a consultant with $75,000 to have him rig his daughter’s college board scores.

Gordon Caplan of Greenwich, Connecticut, who specialized in mergers and acquisitions, is one of the highest-profile parents ensnared in a national college-admissions cheating scandal. He admitted May 21 he conspired with William Rick Singer, the mastermind behind the scam, and funneled the payment through a charity that Singer ran. 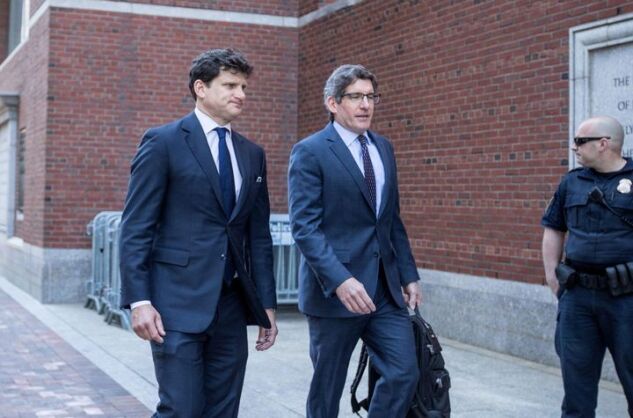 “I would like to emphasize that my daughter had absolutely nothing to do with this,” Caplan told U.S. District Judge Indira Talwani in Boston federal court. “This was all mine.”

A second father, Agustin Huneeus Jr., who lives in San Francisco and whose family owns wineries in California’s Napa County, Oregon and Chile, also pleaded guilty May 21. To date, 14 parents, including Caplan, Huneeus and actress Felicity Huffman, have either pleaded guilty or have agreed to plead guilty.

When federal prosecutors unveiled the sprawling case in March, Caplan came to personify the extent some of the 33 parents charged were willing to cheat to get their kids into elite schools. Another 17 college coaches and test proctors were also charged in what the government said was the largest college-admissions scandal they’ve prosecuted.

During a June 2018 phone call recorded by the FBI, Caplan laughed when discussing the scam with Singer.

“To be honest, I’m not worried about the moral issue here,” Caplan, a graduate of Cornell and Fordham Law School, told Singer. “I’m worried about the, if she’s caught doing that, she’s finished.“

But within weeks of being charged, Caplan issued an apology.

“I take full and sole responsibility for my conduct,” he said. “I want to make clear that my daughter, whom I love more than anything in the world, is a high school junior and has not yet applied to college, much less been accepted by any school. She had no knowledge whatsoever about my actions, has been devastated to learn what I did, and has been hurt the most by it.”

He repeated that outside of court on May 21, saying he’s “ashamed.”

“I am deeply sorry to my daughter, who I love more than anything,” he said. “I’m also sorry to all the other kids in the college admissions process and the parents who are helping them and supporting them. I am truly sorry.”

Because of his ties to Fordham Law School, Caplan helped mobilize the firm’s pro bono representation of Alma Kashkooli, a 12-year-old Iranian girl who was barred from entering the U.S. to receive treatment for a rare genetic condition.

Huneeus admitted My 21 that he paid Singer $50,000 to have his daughter’s test scores corrected and agreed to another $250,000 to get her accepted at the University of Southern California as a recruited varsity water polo player.

According to the U.S., Huneeus complained to Singer in an August 2018 phone call even though his daughter scored 1380 out of a possible 1600 on the SAT test, putting her in the 96th percentile.

“No,” Singer said. ”‘Cause I would have got investigated for sure based on her grades.“

Singer later agreed to try to get Huneeus’s daughter into college as a recruited athlete. After Singer told Huneeus that Donna Heinel, USC’s former athletic administrator, and Jovan Vavic, the school’s water polo coach, would help steer the girl’s application through the system, he asked Huneeus to make the $250,000 payment to his foundation, according to the government. It’s unclear if Huneeus did.

Heinel and Vavic have pleaded not guilty.

Both Caplan and Huneeus pleaded guilty to one count of conspiracy to commit mail fraud and honest-services mail fraud. Under the plea deal, prosecutors said they’ll recommend that Caplan serve a term as low as eight months in prison and pay a fine of $40,000. He is scheduled to be sentenced Oct. 3. Huneeus, who will be sentenced Oct. 4, faces 15 months and a $95,000 fine.

To contact the reporters on this story: Patricia Hurtado in Manhattan at pathurtado@bloomberg.net; Janelle Lawrence in Boston at jlawrence62@bloomberg.net

To contact the editors responsible for this story: David Glovin at dglovin@bloomberg.net Joe Schneider, Steve Stroth