Does have the potential to be a $1 trillion company? It’s a notion that got tweeting early Friday, only for the billionaire to do something fairly rare for him: delete a post.

The exchange started with a tweet by an account that regularly features promotional posts about Tesla and “Full Self-Driving,” a package the company sells along with its driver-assistance system Autopilot. The suite of features often referred to as FSD is controversial because of Tesla’s mixed messaging -- the company tells drivers who use it that they need to be fully attentive.

“FSD is the biggest thing ever,” the user @WholeMarsBlog wrote. “Tesla is going to be bigger than Apple.”

Musk, Tesla’s chief executive officer, replied that he thinks there is “a >0% chance Tesla could be the biggest company.” After another user wrote that they loved “the direction of that arrow,” Musk responded: “Probably within a few months.”

Musk then quickly deleted the latter post. It’s unclear if he thought better of sending it or was asked to take the tweet down.

As part of a settlement reached with the U.S. Securities and Exchange Commission in 2018 related to Musk’s tweets about taking the company private, Tesla to employ a securities lawyer to review executives’ social media posts and make sure they’re consistent with disclosure policies and procedures. Tesla also agreed to oversee communications by Musk, specifically, and to pre-approve anything containing information material to the company or shareholders.

Hours before Friday’s exchange, the National Labor Relations Board that Tesla repeatedly violated U.S. labor law and needed to make Musk delete a tweet in which he threatened to punish workers if they unionized. He has not yet taken down that post.

With a roughly $600 billion market capitalization, Tesla has a long way to go to pass Apple Inc. as the world’s biggest company. The iPhone maker’s market value is about $2 trillion. 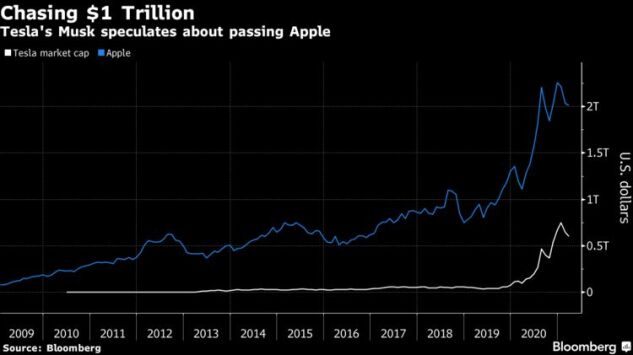 To contact the reporter on this story:
in London at ctrudell1@bloomberg.net