returned to the social bond market with a $1 billion deal just days after it became the first Wall Street bank to agree to audit its business to determine if and how it contributes to racial discrimination.

The social bond is maturing in four years and is part of a $4 billion, , according to a person with knowledge of the matter. The longest portion of the overall offering, a $1.25 billion 21-year security, yields 0.98 percentage point above Treasuries, after initial discussions of around 1.2 percentage points, said the person, who asked not to be identified as the details are private.

The bank last week to do a deep dive into its business to see if, and how, it contributes to racial discrimination. The audit will focus on its 2020 commitment to dedicate $1 billion toward initiatives it hoped would help close the persistent racial wealth gap in the U.S., where the average net worth of a White family is nearly ten times higher than that of a Black family.

The debt will be Citigroup’s second syndicated social bond after it sold $2.5 billion in October last year -- the of its kind from the private sector -- to help fund the construction, rehabilitation and preservation of affordable housing for low-and moderate-income populations in the U.S. Its social bonds are meant to support lending to social inclusive businesses across the bank’s emerging-market footprint, the person said in relation to Wednesday’s deal.

Global sales of social bonds from corporations and governments are at a record $217 billion so far this year, according to compiled by Bloomberg. That’s more than the $162 billion raised in the whole of last year. 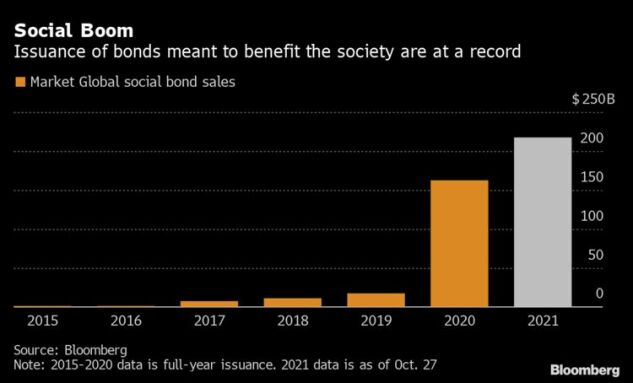 Issuance of the bonds surged at the height of the pandemic as governments, supranational entities and companies boosted borrowing to get through the pandemic. Moody’s ESG Solutions expects the trend to endure long after the effects of the pandemic subside and social issues to increasingly permeate other sustainable debt instruments like sustainability-linked bonds, analysts led by wrote in a report Wednesday.

“Regardless of the structure used, investors will increasingly consider the link between an issuer’s social financing and its overarching ESG credentials and sustainability strategy,” the analysts wrote.

Citigroup joined other big U.S. banks that have sold corporate investment-grade debt after reporting strong third-quarter earnings. Goldman Sachs Group Inc. has so far brought the biggest bond deal in this reporting season, $9 billion in the high-grade market. Morgan Stanley $5 billion of debt followed by a $3.25 billion self-led from Bank of America Corp.

(Updates to say the deal is priced. An earlier version of this story corrected the analyst’s firm in sixth paragraph.)

To contact the reporter on this story:
in New York at dmutua@bloomberg.net