shareholders voted for a proposal to reduce emissions from the company’s customers, the latest sign that oil titans are coming under increasing pressure to address environmental concerns.

According to a preliminary tally, 61% of investors backed the proposal at the company’s annual investor meeting on Wednesday, rebuffing the company’s board, which had urged shareholders to reject it. An item asking Chevron to report on how a significant reduction in fossil-fuel demand would affect its business and a request for a report on political lobbying were narrowly voted down.

The vote, which came on the same day was ordered by a Dutch court to harder and faster than planned, highlights an unprecedented push to hold oil giants accountable for their contributions to climate change. Also on Wednesday, at least two nominees of an activist investment firm on ’s board in a major setback for Chief Executive Officer .

Chevron should be able to increase returns to investors at the same time as it strives to reduce carbon emissions and engages with all its stakeholders to seek solutions, CEO said in an interview on Bloomberg TV. That includes so-called Scope 3 emissions, which are produced when customers of energy producers burn the fuels they sell.

“Across our society and all stakeholders, interest in these issues has never been higher and I think the vote reflects that,” he said. “We’re working on everything, the emissions of our products as they’re used by our customers, we’re offering renewable diesel, renewable natural gas and renewable base oils. We’re working on things like sustainable aviation fuel and hydrogen.” 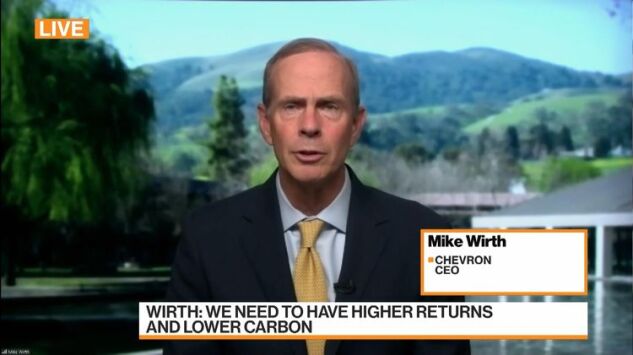 ConocoPhillips investors earlier this month rebuffed the company’s board to support a similar push for a full-scope emissions reduction target. Amsterdam-based shareholder activist group Follow This said that 58% of investors backed the proposal.

(Adds comment from CEO in fourth and fifth paragraphs.)

To contact the reporters on this story:
in Houston at schapa2@bloomberg.net;
in London at chyde3@bloomberg.net