The likelihood of private industry workers being injured on the job declined for the fifth consecutive year, the Bureau of Labor Statistics estimated in a Nov. 9 report.

For employees in private industry, the injury and illness rate declined to 2.9 cases for every 100 full-time worker equivalents in 2016, down from 3.0 in 2015, the bureau said. The private industry rate has continually improved since 2003, when the rate was 5.0, with the exception of 2012 when numbers didn’t change from the prior year. 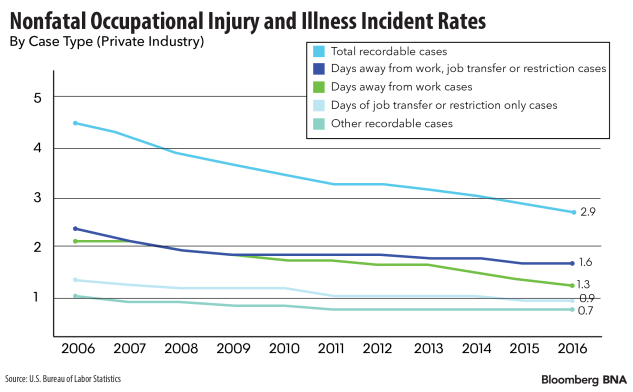 But the latest numbers are still too high, according to David Michaels, who was administrator of the Occupational Safety and Health Administration under President Barack Obama from December 2010 through January 2017.

“Whether it is 3 million, 4 million, or 5 million, it is unacceptable,” Michaels told Bloomberg Environment.

He cited studies, paid for by the BLS, finding that the injury and illness data that employers submitted undercounted the actual number of cases compared to workers’ compensation claims and emergency room visit reports.

A panel organized by the National Academies of Sciences, which includes Scott Mugno, President Donald Trump’s nominee to head OSHA, is expected to release a report in 2018 on how to improve work-related injury and illness data collection.

The rate for injuries serious enough to cause a worker to miss at least one day from a job didn’t decline, Peg Seminario, safety and health director of the AFL-CIO and a member of the academies panel, said after an initial review of BLS’s 2016 numbers.

The rate for private industry workers stalled at 1.6 cases for every 100 full-time equivalent workers.

Its leadership needed to review the data before making any comment, OSHA told Bloomberg Environment. 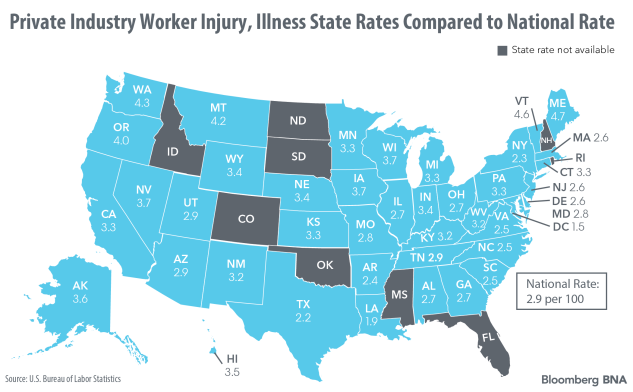 The improvement largely came from a lower rate for minor injuries—1.3 in 2016, down from 1.4 in 2015—and from injuries in which an employee missed at most one day from work.

The BLS numbers are based on confidential reports that about 240,000 employers submitted to the bureau. The collected information is similar to the data that OSHA requires many employers to keep on injuries and illnesses requiring medical treatment beyond first aid.

To contact the reporter on this story: Bruce Rolfsen in Washington at brolfsen@bna.com