Given a loss of investigators, OSHA hasn’t been able to speed up the investigation process. In fiscal 2018, it took OSHA 272 days on average to make a determination, 20 days more than it took in fiscal 2016.
Anthony Devlin/Getty Images

The quantity of whistleblower complaints coming to the federal agency that oversees such actions increased over the last five years while the number of investigators declined, according to agency data provided to Bloomberg Law.

The growing workload has led to the agency closing fewer cases, workers waiting longer for OSHA decisions, and delays for employers defending themselves.

“Months and months go by and you never hear anything back from OSHA,” employer-side attorney Raymond Perez, of counsel at Jackson Lewis PC’s Atlanta office, told Bloomberg Law.

Kellee Kruse, who represents workers as a partner at The Employment Law Group in Washington, told Bloomberg Law she believes OSHA is focusing on cases that present clear violations.

“I think they are doing the best with the resources they have,” Kruse said.

Since fiscal year 2014, the number of whistleblower investigators has declined 24 percent while the number of complaints has grown 29 percent, according to OSHA data.

The OSHA personnel loss isn’t limited to just whistleblower investigators. Since fiscal 2014, the ranks of safety and health inspectors has declined 12 percent to 753. 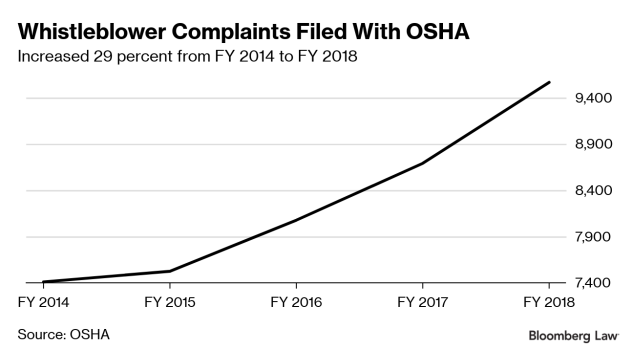 The staff decline is partially attributable to federal funding that hasn’t kept pace with higher personnel costs and a hiring freeze during the initial months of the Trump administration.

The Obama administration tried to increase spending to $21.6 million for fiscal 2017, but Congress didn’t approve the boost.

If past practices continue, about two-thirds of the 9,566 complaints to OSHA will be closed without a complete investigation because OSHA early on determined the grievance had insurmountable problems. Those issues include complaints that were filed later than the law allows, alleged actions that didn’t violate a law OSHA oversees, or complaints over which state authorities had jurisdiction.

In fiscal 2018, OSHA opened full investigations into 3,007 whistleblower cases, the lowest number of new inquiries since fiscal 2013 when 2,698 cases started.

Of the fiscal 2018 cases, 1,870 involved alleged violations of the Occupational Safety and Health Act. The remaining cases were spread across the 21 other whistleblower statutes.

At the other end of the investigation process, OSHA closed 2,964 complaint investigations in fiscal 2018, down 15 percent from fiscal 2017, and the fewest completed cases since fiscal 2012’s 2,770.

Of the completed fiscal 2018 investigations, 23 percent (695) ended with settlements between the company and worker. Less than 2 percent of the cases (44) were referred to the Justice Department, which may file a civil lawsuit on behalf of the worker.

The remaining investigations were closed because the worker withdrew the complaint or OSHA dismissed the case. That continues a long trend that crosses Republican and Democratic administrations.

“They have to take in everything and filter it,” Goetsch told Bloomberg Law.

When OSHA dismisses a railroad whistleblower case, the worker has the option of appealing the decision. “The fact that OSHA has dismissed a case, doesn’t mean anything,” Goetsch said.

The loss of investigators has also meant OSHA hasn’t been able to speed up the investigation process.

For example, officially OSHA has 90 days to complete investigations of whistleblower complaints filed under the Occupational Safety and Health Act. However in fiscal 2018, on average it took OSHA 272 days to make a determination, 20 days more than it took in fiscal 2016.

The fiscal 2018 average for all types of whistleblower cases was 284 days, seven more days than in 2016.

Perez of Jackson Lewis said OSHA may be aware of a complaint for months before the employer is contacted. The delays can make it difficult to find a complainant’s co-workers or supervisors for interviews, he said. 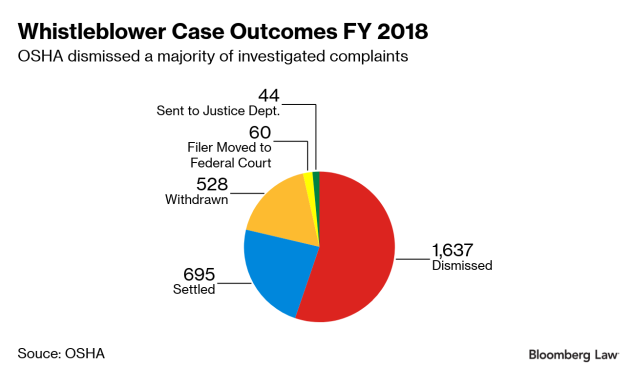 In a written statement to Bloomberg Law, OSHA said it had made some progress in closing cases early, a process the agency calls administrative closure.

Since 2017, about 300 cases were closed with the complainant’s approval if the worker intended to refile the case for review by a federal judge, OSHA said.

Kruse said some workers prefer OSHA to complete its investigation because they don’t want to refile or believe an OSHA determination in their favor will strengthen the case if the employer appeals the case.

While Goetsch hopes the federal government will improve its handling of whistleblower cases, the current process is better that what railroad workers faced 25 years ago when there was no OSHA review.

“Prior to 2008, these employees had nothing,” Goetsch said.