President signed an executive order Tuesday that compels slaughterhouses to remain open, setting up a showdown between the giant companies that produce America’s meat and the unions and activists who want to protect workers in a pandemic.

Meat processing plants around the U.S. have shut down because of the coronavirus, but Trump said in the order that “such closures threaten the continued functioning of the national meat and poultry supply chain, undermining critical infrastructure during the national emergency.”

Using the Defense Production Act, is ordering plants to stay open as part of the critical infrastructure needed to keep people fed amid growing supply disruptions from the coronavirus outbreak. The government will provide additional protective gear for employees as well as guidance.

A handful of companies account for the majority of the nation’s meat, and as workers fell sick in March, plants initially continued to run. But pressure from local health officials and unions led to voluntary closures.

Companies have been pressing to reopen. The president himself has long agitated for Americans to return to work and restore an economy crippled by social distancing measures. 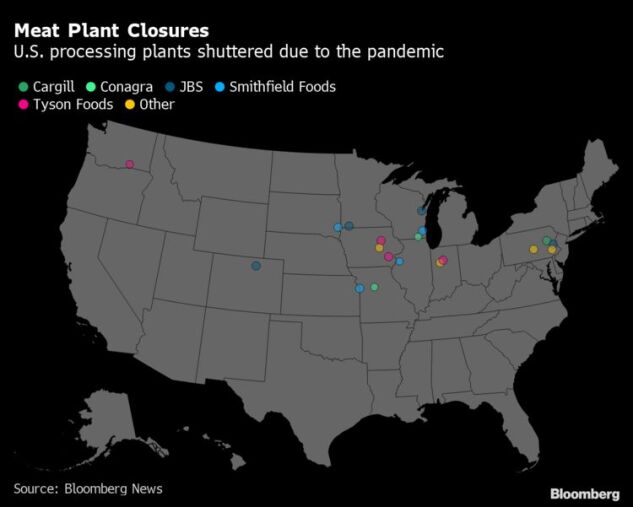 Environmental Working Group called the order a potential death sentence. The United Food and Commercial Workers union said in a statement that if workers aren’t safe, the food supply won’t be either. At least 20 workers in meat and food processing have died, and 5,000 meatpacking workers have either tested positive for the virus or were forced to self-quarantine, according to UFCW.

While unions have been speaking out against unsafe plant conditions and working for boosts in pay, collective bargaining agreements often restrict them from organizing or endorsing strikes. Still, lives are stake, unions say.

“People should never be expected to put their lives at risk by going to work,” said , President of the Retail, Wholesale and Department Store Union. “If they can’t be assured of their safety, they have every right to make their concerns heard by their employers.”

Trump signaled the executive action at the White House on Tuesday, saying he planned to sign an order aimed at liability, which had become “a road block” for the company. He didn’t elaborate.

The order, though, is not be limited to Tyson, an administration official said. It will affect many processing plants supplying beef, chicken, eggs and pork.

JBS’s local unit and Smithfield Foods Inc. didn’t immediately respond to calls and emails, while Tyson and Cargill Inc. said they couldn’t comment because they don’t have the executive order. Tyson did say safety remains its top priority “while we work to continue fulfilling our role of feeding families across the country.”

The White House decided to make the move amid estimates that as much as 80% of U.S. meat production capacity could shut down. But a union representing plant workers accused the administration of failing to develop meaningful safety requirements that would have helped contain the disruptions.

On Sunday, Tyson Foods Chairman said in a blog post and paid advertisements in several newspapers that the U.S. food supply chain “is breaking,” with millions of pounds of meat set to “disappear” as plants close.

Illnesses in the meat-processing industry and shifts in demand after restaurants closed have disrupted the supply chain. Dairy farmers are dumping milk that can’t be sold to processors, broiler operations have been breaking eggs to reduce supplies and some fruit and vegetables are rotting in fields amid labor and distribution disruptions.

Many low-income Americans, at the same time, have been waiting in long lines at food banks, which have reported shortages. Asked about the country’s food supply, Trump said: “There’s plenty of supply.”

The Defense Production Act allows the government broad power to direct industrial production in crises. Trump has previously invoked the law -- or threatened to invoke it -- in order to increase the supply of medical gear including ventilators, masks and swabs to test for coronavirus infection.

The White House has been discussing the order with meatpacking executives to determine what they need to operate safely and stay open, in order to prevent shortages, an administration official said.

White House General Counsel worked with private companies to design a federal mandate to keep the plants open and to provide them additional virus testing capacity as well as protective gear.

Trump acted one day after Iowa’s two U.S. senators and its governor urged the administration to invoke the DPA to keep meatpackers open and reopen closed facilities “as soon as it is possible to do so safely.” Iowa produces one-third of the nation’s pork supply, according to the state officials.

The officials also asked for federal assistance in euthanizing pigs and reimbursing hog farmers for their losses due to closures of processing facilities.

At least 22 meat plants have closed within the past two months, reducing pork processing capacity by 25% and beef processing capacity by 10%, according to UFCW. Farmers have animals with nowhere to go as a result, and the situation is so dire that the U.S. Department of Agriculture is setting up a center to help growers with “depopulation and disposal methods” for animals.

Experts have warned the U.S. could be just weeks away from fresh meat shortages. While inventories can provide some cushion, stockpiles are limited. That’s helped push higher, with prices for June settlement rallying as much as 10% at one point on Tuesday, the most ever for the contract.

Total American meat supplies in cold-storage facilities are equal to roughly two weeks of production. With most plant shutdowns lasting about 14 days for safety reasons, that further underscores the potential for deficits.

And the shutdowns are happening at a time when global meat supplies were already tight. China, the world’s top hog producer, has been battling an outbreak of African swine fever, which destroyed millions of the country’s pigs.

“On Workers’ Memorial Day of all days, the Trump administration shouldn’t decide which workers will be safe and which workers will be in mortal danger,” said Congresswoman , a North Carolina Democrat who chairs the Workplace Protections Subcommittee. “Instead, we must reopen safely in a way that centers workers and protects the long-term viability of our food supply chain by keeping employees healthy now, and in the future.”

To contact the reporters on this story:
in Washington at jjacobs68@bloomberg.net;
in Chicago at lmulvany2@bloomberg.net