Broad federal and state rules to protect workers from future infectious diseases are a necessary complement to workplace safety regulations specific to Covid-19, some advocates say.

“If anybody thinks this pandemic is the last one that we’re going to experience, I think they’re not living in the real world,” said John Howard, director of the National Institute for Occupational Safety and Health, a division of the Centers for Disease Control and Prevention, in a March 3 discussion with reporters during the National Safety Council Congress.

The federal Occupational Safety and Health Administration, which is considering whether to advance an emergency temporary rule in response to Covid-19, often finds itself reacting to new health hazards and trends, said Richard Fairfax, who served as the agency’s top career service official before retiring in 2013. A rule designed to apply to infectious diseases in broad terms would instead be forward-looking and give federal regulators options if a new public health emergency develops.

With an infectious diseases rule in place on the federal or state level, employers would know what they’re expected to do to safeguard their workers when the next potentially deadly disease arises. OSHA could use such a rule to craft guidance at an early stage, Fairfax said, instead of rushing to issue an emergency response as infections spread across different industries.

“This is an opportunity to get ahead of the situation and protect workers in the future,” he said in an interview with Bloomberg Law.

In January 2020, before Covid-19 had been declared a national emergency, Democratic House members and worker advocates called on OSHA to reopen its stalled infectious diseases rule, which was proposed in 2010 but never finalized. But when the Trump administration refused to revisit the rulemaking rule and the severity of the coronavirus pandemic became more alarming, the political debate in Washington shifted to focus on OSHA establishing an emergency Covid-19 rule.

The Trump administration’s OSHA leaders resisted those calls, but President Joe Biden instructed the agency in a Jan. 21 executive order to decide if a Covid-19 emergency temporary standard was justified and, if so, to enact it by March 15.

A spokesperson for the Department of Labor, which oversees OSHA, said Thursday that the agency is still assessing the need for a Covid-19 standard.

‘Back to Square One’

Fairfax, now a consultant with ORC HSE Strategies in Washington, recalled that OSHA didn’t enact an infectious disease rule in response to any of the infectious diseases that cropped up during his 36-year safety agency tenure.

“We’ve had H1N1. We’ve had SARS. We’ve had MRSA. And there is always TB in the background,” Fairfax said.

While OSHA did issue reactionary guidance in response to those public health threats, the Covid-19 pandemic shows the need for an expansive infectious diseases rule, he said.

“What if five years from now it’s Covid-20?” Fairfax said. “It’s back to square one. OSHA will be relying on the general duty clause, the personal protection equipment standards, the respirator standards, and the housekeeping standards.”

Previous work performed on the agency’s dormant infectious diseases rule for health-care providers would give it a head start (RIN:1218-AC46).

“They already have a draft of it, and it’s a pretty good draft,” Fairfax said.

The proposed rule stalled in 2014 after a comment period closed and a review of impacts on small businesses was completed.

The American Hospital Association objected to the rule, telling OSHA at the time that its members had “effective and comprehensive programs that integrate the need to protect patients and health care personnel, and that there is no need for an additional standard.”

Courtney M. Malveaux, co-chair of Jackson Lewis’s workplace safety and health practice group in Richmond, Va., said employers’ perspectives on an infectious diseases rule would depend on the industry and the rule’s requirements.

For health-care employers, Malveaux said a standard may make sense over the longer term, depending on its provisions.

But expanding the rule to cover other industries could repeat the problems with state Covid-19 rules, such as Virginia’s, Malveaux said. Rather than focusing on best-practices, Virginia employers were subjected to additional tasks of complying with record-keeping mandates and determining if workers were infected at work or elsewhere. 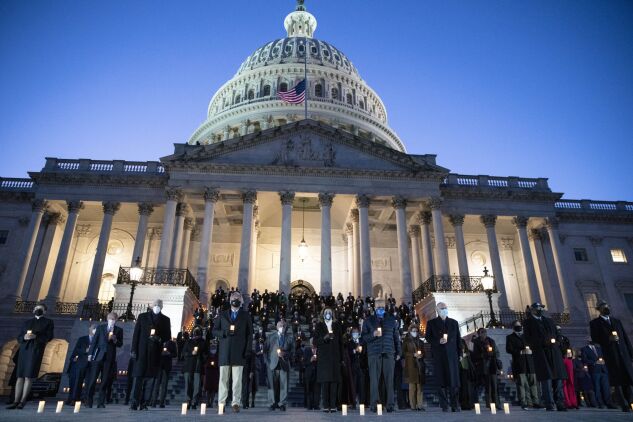 Members of Congress participate in a moment of silence for the 500,000 American lives lost to Covid-19 outside the U.S. Capitol on Feb. 23, 2021.
Photographer: Sarah Silbiger/Bloomberg

A broader federal rule could require employers to establish an infectious disease prevention plan based on existing guidance from the safety agency and the CDC, Fairfax said. In general, an employer would be expected to develop a control plan and explain how on-the-job spread of significant diseases would be prevented.

The regulation wouldn’t need to set specific periods for quarantining or isolating workers, because that determination would come from guidance specific to the disease that the CDC would issue, he said.

There is precedent for a broader rule. NIOSH’s Howard pointed out that OSHA’s existing rule protecting workers from diseases transmitted by contact with blood applies to multiple illnesses.

“The blood-borne pathogens standard isn’t an HIV standard, it’s not a hepatitis standard,” Howard said, telling reporters at the National Safety Council Congress that the same idea of a non-disease-specific rule should work for illnesses spread through the air.

In May, California safety organizations petitioned the state to begin drafting an infectious diseases rule to be enforced by the California Division of Occupational Safety and Health.

However, the state’s Occupational Safety and Health Standards Board opted not to consider a broad rule because of the urgent need to issue an emergency Covid-19 regulation. Its coronavirus-specific rule took effect Nov. 30, and Cal/OSHA is now considering revisions.

Stephen Knight, executive director of Oakland-based advocacy group Worksafe, was one of the original petitioners. He told Bloomberg Law that he agreed with the states’ decision to delay pursuit of an infectious diseases rule.

“Worksafe is not advocating for work to be done on a permanent standard instead of the emergency temporary standard,” Knight said in an email. “Clearly, it continues to be a dynamic situation and there is good work being done on the emergency rule that is laying the foundation for long-term protection.”

Similar decisions were made in Oregon to focus the state’s rulemaking on Covid-19.

Jess Giannettino Villatoro, political director of the Oregon AFL-CIO in Portland, said she told the Oregon Occupational Safety and Health Administration in January that the immediate emphasis needed to be on Covid-19.

Oregon regulators adopted an emergency Covid-19 rule in November and are working to enact a permanent rule by May.

Virginia is the only state in the country to have enacted a permanent Covid-19 workplace rule. While California has an airborne transmissible disease standard for health-care employers, no other state has an infectious diseases rule.

In a Jan. 9 letter to Oregon OSHA, Villatoro outlined the AFL-CIO’s position: “Although we appreciate the effort and initiative to craft a new rule to address all current and potential future infectious diseases in this few week process, there is broad agreement that to do so in the prescribed timeline isn’t feasible.”