Companies are increasingly restricting the use of ladders in an effort to reduce the rising toll of injuries and deaths from falls, while the industry responds with innovative design changes.

The number of ladder-related deaths and injuries have increased at a faster pace than other on-the-job fatalities and injuries, so many employers are instituting voluntary initiatives—sometimes called “ladders last”—that can require workers to get written permission from supervisors before they step onto portable ladders or to find an alternative.

The solutions could come with a cost to employers, particularly if new equipment is required, but advocates say the payoff will come with fewer injury claims and lost work days.

An essential problem with ladders is if you fall, you’re going to hit something—hard—David Walline, a safety consultant and president of Walline Consulting Ltd. in Port Saint Lucie, Fla., told Bloomberg Environment. “There is no fail-safe,” he said.

“The ordinary ladders that we’ve all been accustomed to and the training that we’ve been accustomed to is not working,” Ryan Moss, president of the American Ladder Institute and chief executive officer of manufacturer Little Giant Ladder Systems, said during a recent National Safety Council forum on ladder safety.

So the ladder manufacturing industry is developing new designs such as adjustable outriggers at a ladder’s base, intended to make it more difficult to tip over a ladder, and a platform with guardrails atop ladders to prevent workers from falling.

Ladder-related injuries, serious enough to require an employee to miss at least one day of work, increased 9 percent from 2011 to 2015, reaching to 23,920. The overall injury rate didn’t change during that time period, staying at 2.2 cases for every 10,000 full-time worker equivalents.

Once employees are injured, it often takes weeks to recover. Ladder-related injuries in 2015 led to workers missing a median of 21 days from their jobs, while the median for all types of injury sources was eight days. 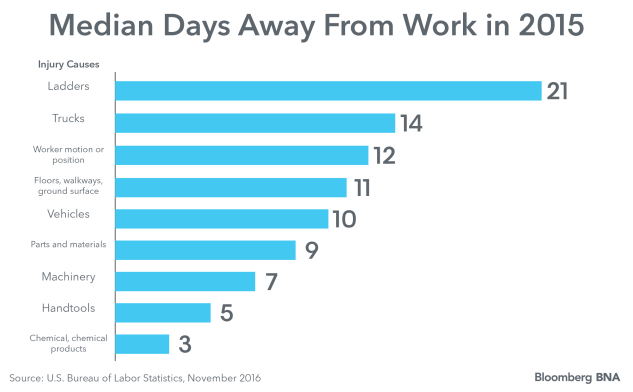 Injury numbers are highest in the construction industry with 11.2 hurt workers for every 10,000 employees, according to 2015 BLS numbers. And that’s prompting many construction companies to reconsider ladder use.

Ladders aren’t banned at Skanska construction sites, but supervisors have to sign off on any use, Haining said.

Before construction begins, Haining said, Skanska teams review building plans with architects and clients looking for ways to eliminate the need for ladders during construction and, in some cases, during maintenance after the project is completed.

When working at heights is required, the preference is to use scaffolds, aerial work platforms, and other equipment that lifts workers and subcontractors while protecting them from falls, Haining said.

If workers conclude a ladder is the solution, then documents describing the need and precautions must be presented to supervisors who may approve using a ladder.

Manufacturers are also questioning the need for ladders at their plants.

Owens Corning Inc., an insulation and building material producer, places the protection of workers at heights as one of its “Critical Six” safety priorities, Doug Pontsler, the company’s vice president of environmental health and safety, said.

Pontsler told Bloomberg Environment that the key to reducing a need for ladders is finding alternatives early in the process of designing new manufacturing plants.

For a factory in Gastonia, N.C., that opened in 2015, planners eliminated about 85 percent of the proposed requirements for fixed and portable ladders in the design phase, Pontsler said.

At Boeing Co., Greg Suarez, a safety program manager, is on a mission to eliminate A-frame ladders from aircraft production floors.

“One of the most difficult things that I found during the process, which has been about two and a half years now, is the idea that it was even possible,” Suarez told the National Safety Council forum. “The idea of getting rid of ladders blew people’s minds.” 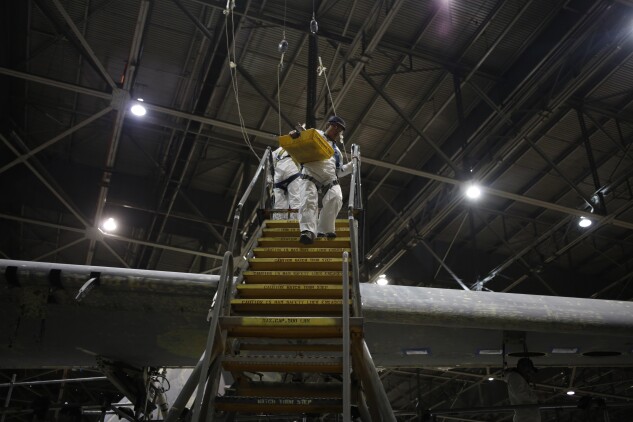 Boeing Co. wants to eliminate using A-frame ladders at its aircraft production and maintenance plants such as its Global Services and Support facility in San Antonio, Texas
Luke Sharrett/Bloomberg

In the push to reduce ladder use, however, some companies can forget to offer a practical safe alternative, which could lead to improvised, more hazardous practices such as standing on a 5-gallon bucket, according to Thomas Kramer, a safety consultant and managing principal of the safety engineering firm LJB Inc., in Miamisburg, Ohio.

“You’ve got to be careful what you incentivize,” Kramer told Bloomberg Environment.

Walline, of Walline Consulting Ltd., said one of the best sources of ideas for alternatives to ladders is on a factory floor. “Workers are full of ideas to eliminate them.”

He recalled a situation where a worker repeatedly had to climb a portable ladder to reach the top of shipping pallets in order to scan packaging bar codes. The worker’s solution to climbing the ladder was to mount the scanner on a retractable poll and lift the scanner above the shipment, Walline said.

When replacing ladders requires buying new equipment, some managers may balk at the initial cost, Walline said. But a long-term view will show that upfront spending is paid for by fewer injury claims and lost work days.

The ladder industry is responding to the safety concerns of businesses by offering products intended to reduce the chance of workers falling.

Ron Schwartz, vice president of Tri-Arc Manufacturing in Pittsburgh and a past president of the American Ladder Institute, said at the National Safety Council forum that ladder manufacturers are “designing out what human behavior is use to doing, which are things that are out of compliance.”

Schwartz pointed to the elimination of the flat section atop A-frame ladders, called the top cap, to discourage people from standing on top of the ladder.

At the base of one extension ladder were outriggers that reach out and are intended to make it less likely someone on the ladder will tip it over by reaching too far. To accommodate surfaces with different heights, individual legs and outriggers could be adjusted up or down. At the ladder’s top were locking hooks to latch onto the structure supporting the ladder.

For A-frame stepladders, a common safety issue is people standing on the highest rung—something users aren’t supposed to do. To eliminate the rung hazard, Little Giant eliminated the top rung.

For employers requiring workers at heights to be protected by guard rails, the company offers a height-adjustable A-frame ladder with a cage at the top.

Some injuries occur when workers step off a ladder too soon, assuming they’ve reached the bottom rung even though they haven’t. To alert workers that they’ve reached the lowest rung, stepping on the rung makes a clicking sound anytime it’s stepped on.

Much of the safety debate goes beyond simple compliance with Occupational Health and Safety Administration requirements.

OSHA and industry groups are trying to improve awareness of fall and ladder hazards through campaigns, education, and training programs.

Not adhering to construction ladder regulations consistently have been among the offenses most-cited by OSHA, with the agency issuing citations for 2,490 alleged serious or repeat violations in fiscal 2016.

Consensus standards, voluntarily agreed to by industry representatives, covering ladder use include ANSI/ASC A14 and ANSI/ASSE A10.

To contact the reporter on this story: Bruce Rolfsen in Washington at brolfsen@bna.com