Blistering hot days in the U.S. could increase significantly as the Earth warms, threatening infrastructure, businesses, and public health—but the choices that governments make now could limit the severity, a new report says.

The July 16 report from the Union of Concerned Scientists, “Killer Heat in the United States: The Future of Dangerously Hot Days,” projects large and widespread spikes in high-heat days across the U.S. as climate change worsens.

If the U.S. takes little or no action to cut climate-warming greenhouse gas emissions, the country’s hottest weather could see up to a fourfold increase by mid-century, the study finds. That includes regions like New England and the Pacific Northwest that haven’t historically faced high-heat days.

Taking even some action to mitigate greenhouse emissions would minimize the extreme heat cities and communities will face in the future, the report finds.

But it also notes that even if global warming were kept below 2 degrees Celsius (3.6 degrees Fahrenheit), the U.S. will still experience significant increases in high-heat days. 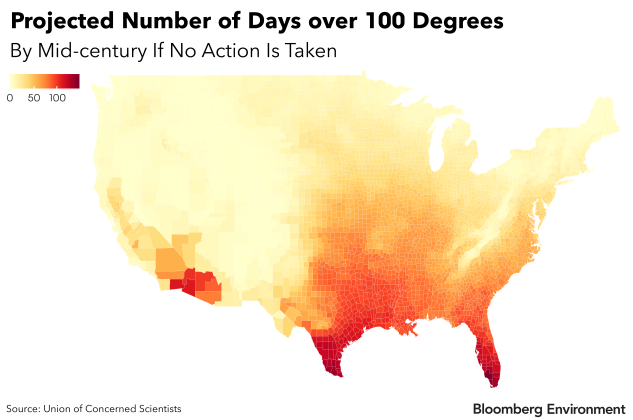 Communities will have to learn how to adapt, and they should start now, Rachel Cleetus, a lead economist and policy director at the Union of Concerned Scientists’ Climate and Energy Program and a lead author on the report, told Bloomberg Environment in an interview.

“We cannot simply air-condition our way out of the problem,” Cleetus said. “We have to bring a wide suite of tools. We have to be thinking about smart climate design of buildings and communities.”

Democrats in Congress are also interested in the issue. Several House Democrats introduced a bill July 10 (H.R. 3668) that would require the federal government to set standards to protect workers from high heat.

But Cleetus and other scientists working on urban heat said policy makers need to think about adaptation and mitigation hand-in-hand. Cutting greenhouse gas emissions to prevent the worst heat is a coping strategy, Cleetus said.

Extreme heat threatens public health, particularly for vulnerable parts of the population, such as children, the elderly, those with chronic illnesses, low-income communities, and outdoor workers. It can also exacerbate other conditions such as heart attacks and respiratory illness.

“What people don’t realize is there are more deaths from heat than any of the other manifestations of climate change,” Jonathan Fielding, a professor of public health at the University of California, Los Angeles and former director of the city’s public health department, said in an interview.

Heat can put a strain on or damage infrastructure, including utility infrastructure and water systems, scientists said. Extreme heat can also threaten local economies, driving business away or crippling businesses that rely on outdoor work.

“Heat is very dangerous. It’s not one of those weather events toppling down trees and damaging homes, but it is just as dangerous,” Michelle Hawkins, a branch chief with the National Weather Service, said in an interview.

The Weather Service is working to improve its early-warning systems for extreme heat, Hawkins said.

For example, as part of that work, she said it has been working on a new product to provide a heat stress measurement, known as the WetBulb Globe Temperature, in addition to the heat index.

That measurement, which includes factors like temperature, wind chill, and solar radiation, is a better indicator for heat stress on active people like outdoor workers and athletes, she said.

Cleetus and other researchers say there’s plenty cities can do, both to cut greenhouse gas emissions and to put in place the comprehensive programs they’ll need to cope with extreme heat in the future.

Spikes in urban heat are also driven by city design and human activity in cities, which traps more heat than surrounding areas—an effect known as the “urban heat island.” That effect can contribute at least half of the rising heat cities are facing, researchers said.

The Union of Concerned Scientists study doesn’t account for the urban heat island effect in its projections, a factor it notes will exacerbate the extreme heat cities will face.

Many cities are starting to put in place cooling initiatives and are working on comprehensive plans to address the heat island effect. They’re using tactics such as smart city design, planting trees to produce shade, and installing public cooling centers in communities across the city.

“Sometimes the global scale of climate change can feel intimidating for a local government to take on, but these are actions that a locality can take on,” said Jason Vargo, a scientist who has studied the urban heat island for the University of Wisconsin, Madison and Georgia Tech, and currently works on climate change and health in California.

Those changes “can have an impact on temperature within the next 10 years,” he added.

The city of Phoenix, for example, is working on a HeatReady City program to bolster its emergency services and community-based programs to increase tree and shade cover, said Melissa Guardaro, a research fellow at Arizona State University who has worked with the city on multiple urban heat projects. 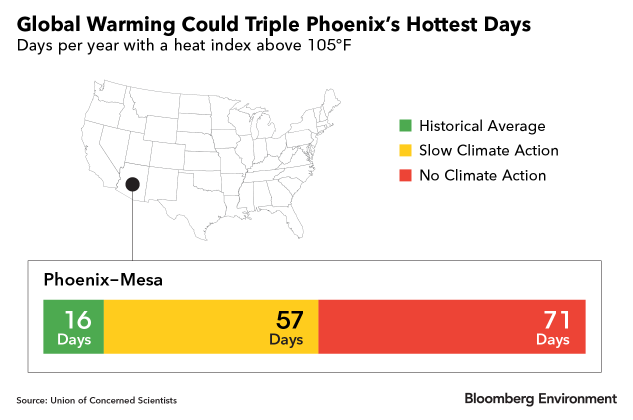 But that doesn’t necessarily mean those cities are directly linking that work to climate change, even though it is adapting to its impacts.

Phoenix, despite its leadership on urban heat policies, is still sometimes skittish to talk about climate change, Guardaro said.

But she also suggested that combating urban heat could be a bridge to addressing climate change.

“I feel in many ways urban heat is really our opportunity to get everybody on board,” Guardaro said. “There’s no question it’s getting hotter in cities.”