Sports betting is on the rebound.

After two pandemic-stricken quarters with virtually no sports, betting operations collected $352 million in the third quarter—a 47% increase from last year that fueled higher tax revenue in dozens of states.

For the January-September period, sports betting revenue totaled $678 million, up 27% on the year—even as other categories of gaming, and the tax revenue they generate, suffered.

The return of sports couldn’t have come at a more clutch time for state coffers, many of which remain in the red as a second wave of coronavirus hits the country. With winter sports set to kick off in just a few weeks, states are poised to collect even more.

“Sports betting is having a great year, and there’s a lot of enthusiasm for it,” said Dave Forman, senior director of research at the American Gaming Association. “The sports calendar is kind of wonky right now with leagues changing schedules, so quarter-to-quarter comparisons are tricky, but the uptick speaks to the growing appetite for betting on sports.”

The industry’s stock continues to rise, thanks to record collections and successful ballot campaigns, which put legal sports betting on track for 26 states and the District of Columbia by 2021.

Meanwhile, despite limited in-person betting, New Jersey, Pennsylvania and five other states reporting October data collected their most bets ever last month, and with it their most tax revenue.That’s even more important considering that 35 states are still experiencing overall tax revenue declines, according to a Tax Policy Center report last week. 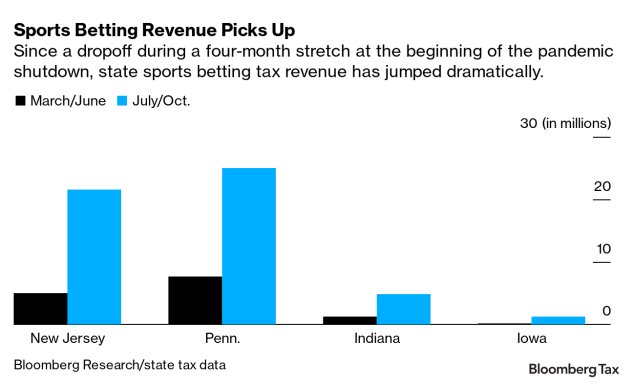 New Jersey, one of the first states to legalize the practice after the Supreme Court overturned the Professional and Amateur Sports Protection Act in 2018, is on pace to break the $5.3 billion yearly all-jurisdiction record set by Nevada in 2019. The $800 million it collected last month generated $7.4 million in tax revenue—its highest monthly mark to date.

“With the return of major sports following Covid-19 cancellations and postponements, we’ve seen states like New Jersey bounce back with record-setting numbers, despite the sporting calendar no longer containing unusual overlap of major leagues,” said Patrick Eichner, director of communications for PointsBet, an Australian-based sportsbook that is currently live in five states and which launched mobile operations in Colorado last Wednesday. “It’s not crazy at all to say the best is yet to come.”

The winning streak is poised to continue with the NBA and college winter sports restarting in a few weeks.

“It is huge,” said Steven Astrachan, marketing vice president at Vigtory, a sports betting startup based in Chicago. “You typically see the NFL and NCAA football generating the most handle and bets placed per game, but basketball as a whole is the runner-up due to the sheer volume of games and large fanbase. Even with some of the lower viewership ratings, I would be surprised if we didn’t see record highs for basketball betting this winter and spring.”

Basketball markets missed out on their biggest months early this year after the NCAA canceled the Division I Men’s Basketball Tournament. There will be March Madness in 2021, as the NCAA this week announced plans for a bubble-style single location tournament in Indiana.

“It will certainly be interesting to see how those basketball hotbeds perform—particularly after missing out on their favorite time of the year last March,” Eichner said.

The pandemic and the need for revenue have improved the once-taboo industry’s standing with lawmakers, colleges, and the rest of the sports business world.

The NCAA, one of the parties in the 2018 decision that sued to keep sports betting illegal, now permits betting sponsorships for its colleges, some of which have had to ax varsity sports programs because of the pandemic.

States like Massachusetts and Georgia, which examined sports betting this year, are expected to take up the issue again in 2021. Competition for revenue with neighbors helped to drive recent legislation in Maryland, Louisiana, and South Dakota, which are all expected to launch live operations in 2021.

“Legislators in a couple states have moved things forward and more are discussing sports betting in light of the pandemic’s effect on revenue,” Forman said.

The tax haul will continue to rise as the industry’s total U.S. revenue climbs toward $5 billion in 2023, according to a November analysis from Eilers & Krejcik Gaming. And if the remaining 24 states legalize revenue, they say, it could top $19 billion.

To contact the editors responsible for this story: at jharrington@bloombergtax.com; at djolly@bloombergindustry.com