Six states with drinking water standards for so-called “forever chemicals” are now wrestling with what those limits mean when water contamination from Department of Defense sites seep into their communities.

Members of Congress from both parties are starting to vent their frustration at military foot-dragging even as the states take different paths to address the contamination. One state is suing. Another must wait years for an investigation to end. A third is keeping a watchful eye on the Biden administration.

The crux of the issue is that PFAS, or per- and polyfluoroalkyl substances—barely talked about a few decades go—are showing up in water, air, and food nationwide. Some of the contamination has also been linked to PFAS-laced firefighting foam used on military bases.

States grappling with how to keep drinking water safe from the chemicals have set legal limits. Since 2019, Massachusetts, Michigan, New Hampshire, New Jersey, New York, and Vermont have set their own maximum contaminant levels for some PFAS in water, ranging from 8 to 20 parts per trillion. A Virginia standard will take effect in 2022. Some of the chemicals can cause certain cancers, developmental delays, and even vaccine resistance.

But the federal Environmental Protection Agency has no enforceable drinking water standard PFAS. Instead, it set a health advisory level for two of the substances at 70 parts per trillion combined.

“The states that have set these limits and EPA seem to have a different opinion about what is a safe level,” said Michael Wimsatt, director of the waste management division in New Hampshire’s Department of Environmental Services.

The gap gives the military some room to avoid more stringent state limits because of their differing authority given through federal regulations.

In October, Schumer sent a letter to the Secretary of the Navy to expand PFAS investigations at the former Naval Weapons Industrial Reserve Plant in Calverton, N.Y. He also asked the Navy to provide public water connections where PFAS levels in private wells exceed the state standard.

“Only in this way can the Navy reassure the community that it is acting in the best interest of public health for the community which it has called home for so many years,” Schumer wrote. The Navy hasn’t responded, Roefaro said.

Schumer isn’t alone. On Jan. 29, a group of 132 Republican and Democratic legislators asked President Joe Biden in a letter to direct federal agencies to act on PFAS. Legislators from both parties also criticized the Defense Department for a lack of action during the task force meeting.

“The federal government is the federal government,” Rep. Dan Kildee (D-Mich.) said during a congressional PFAS task force meeting. “We shouldn’t have one branch of government regulating PFAS, and the other one trying to avoid regulations. And unfortunately that’s been the position of the DOD and it’s just not acceptable.”

Contamination spots at military facilities dot the country, linked to use of PFAS-containing aqueous film-forming foams, or AFFF, that extinguish jet fuel and other liquid fires.

The military has said it isn’t protesting any state drinking water standards, and will evaluate if the thresholds “should be used in setting final cleanup levels,” said Defense Department spokesman Peter Hughes in an email.

In cases where the Pentagon is the known source of PFAS, and contamination is above the EPA level, “DoD is providing bottled water, filtering systems, and conducting other ‘removal actions,’” in compliance with the federal Comprehensive Environmental Response, Compensation, and Liability Act, also called Superfund, Hughes wrote.

The Pentagon wouldn’t make a subject matter expert available for an interview.

The EPA’s health advisory level and other guidance also play into the Pentagon’s response. The EPA issued interim guidance in 2019 that recommends cleanup sites involving groundwater screen for PFOS and PFOA at 40 parts per trillion to help determine if additional investigations are necessary, according to an EPA spokeswoman who declined to be named.

Biden’s administration hasn’t talked about PFAS since he took office but his campaign promised to take action, including designation of PFAS as a hazardous substance and setting enforceable limits.

But that may not be soon enough for states like New Jersey, where Joint Base McGuire-Dix-Lakehurst, near Trenton, is home to two active runways and the site of firefighter training. In January, New Jersey sued the U.S. for violating state and federal safe drinking water acts and not acting fast enough based on the state’s drinking water standards—13 parts per trillion for perfluorooctane sulfonate, or PFOS, and 14 parts per trillion for perfluorooctanoic acid, or PFOA, the two most well-studied PFAS compounds.

The numbers at and near the base are well above standards. Testing by the New Jersey Department of Environmental Protection detected PFAS as high as 1,688 parts per trillion in private wells off-base.

The state, which declined to comment because of litigation, wants a judge to order the federal government liable for current and future costs to investigate, clean up, remove, treat, and monitor for PFAS. It also wants medical monitoring and payment for alternative water supplies in areas above the state threshold. 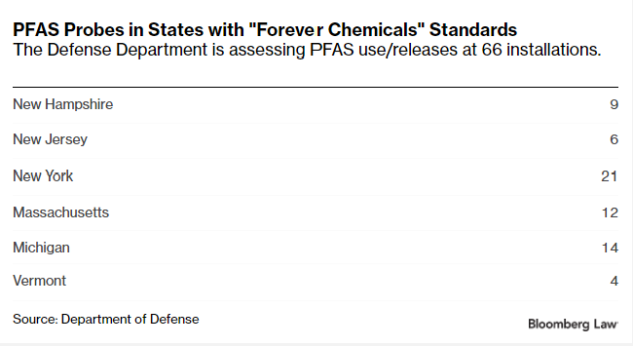 The military didn’t comment about New Jersey in particular, but said some kind of action related to PFAS is happening near 43 installations across the United States where off-site drinking water exceeds the EPA threshold, according to a list provided by Hughes.

In the six states with active PFAS standards, Department of Defense is assessing overall PFAS use or possible releases at 66 installations, with New York topping the list at 21 facilities.

Law on States’ Side?

On Cape Cod, a PFAS plume was tracked to a tanker crash that spilled jet fuel en route to Otis Air National Guard Base. Massachusetts’ PFAS limits took effect in October, and the Pentagon is doing an assessment now for a Massachusetts site.

Paul Locke, assistant commissioner for the waste site cleanup program at the state’s Department of Environmental Protection, said that “Nationally, the DOD is taking this very slowly and carefully.”

Massachusetts is confident the drinking water standard will be accepted by military officials, just as they have done in the past with perchlorate, which the state regulates in the absence of federal rules.

“It would be a massive deviation from the letter of the law,” Locke said.

Larry Schnapf, an environmental attorney with Schnapf LLC, agreed that the states should have the law on their sides because maximum contaminant levels, or MCLs, have applied in the past.

“Obviously any entity that’s doing a cleanup is going to try to find a more lenient standard,” said Schnapf, who is also an adjunct professor at New York Law School. “I would think that the state MCL would be applicable. I don’t see how the DoD could succeed in this.”

Some Sites in Limbo

Michigan is in a similar spot. The Air Force has said it would take into account state standards when gauging groundwater contamination as part of a remedial investigation, said Scott Dean, spokesman for the state’s Department of Environment, Great Lakes, and Energy.

The Air Force has of now “not agreed or disagreed with cleaning up to the MCL standards,” Dean said. “That determination will come during the final remedy phase.”

Vermont has also not had pushback on the standards during investigations of contamination at the Vermont Air National Guard base, though they are “refusing to take over operation or pay for emergency actions we have taken in order to protect public health,” Vermont Department of Environmental Conservation Commissioner Peter Walke said in an email, speaking about the military.

At Naval Weapons Industrial Reserve Plant Calverton in New York—where the state standard is 10 parts per trillion each for PFOS and PFOA—Navy contractors are using 40 parts per trillion as the threshold to delineate areas of concern, said Adrienne Esposito, executive director of Citizens Campaign for the Environment and a member of Calverton’s Restoration Advisory Board, which advises the Navy on cleanup.

New York’s Department of Environmental Conservation declined to make anyone available for an interview. In a statement, it said the agency was “actively discussing this issue with responsible parties involved in site cleanups.”

“It’s become really egregious,” Esposito said about the military and state oversight. “They’ve been digging their heels in on this one.”

—With assistance from Pat Rizzuto.