Johnson & Johnson paid a steep price this year for claims that its celebrated baby powder was contaminated with asbestos. Problem is, 2019 could be even worse.

A jury ordered the company in July to pay $4.69 billion to 22 women who blamed the talc-based product for causing their ovarian cancer. The prospect of similar judgments helped erase $45 billion in J&J’s market value, with the shares headed for their biggest annual loss in a decade.

Next year, the world’s largest maker of health-care products is scheduled to face almost three times as many baby-powder trials. Four will be in St. Louis, the same state court where the company lost the July verdict. Several of the trials involve multiple alleged victims, including one with 38 women set to start in August, according to court filings.

“The increased number of trials, especially in what is considered a plaintiff-friendly venue like St. Louis, doesn’t augur well for J&J,’’ said Elizabeth Burch, a University of Georgia professor who teaches about mass-tort law. “The more they lose, the more cases will be filed. I just don’t see how they are going to get a handle on this litigation.’’ 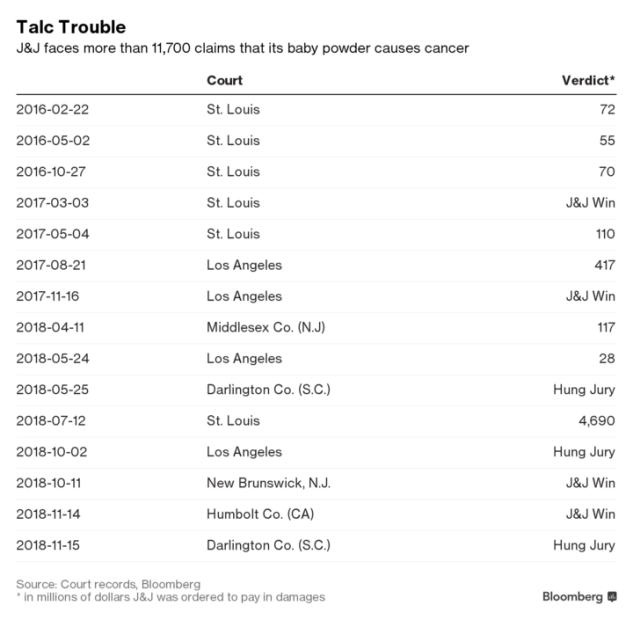 Investor concern over litigation risk has grown following media reports of internal documents showing company officials have known since the 1970s that some of the talc used in baby powder contained asbestos. Thousands of plaintiffs now accuse J&J of hiding the cancer risk to protect a brand that’s been a staple in American homes for more than a century.

Baby powder is mostly talc, a mineral used to keep skin dry and as an astringent to prevent diaper rash. But geological formations that contain talc also yield asbestos, a mineral used in products such as building insulation. Scientists have found links between asbestos and mesothelioma, a rare form of cancer. Plaintiffs’ lawyers claim studies have also shown a link between talc and ovarian cancer.

Women suing J&J contend they got cancer either from exposure to asbestos-laced talc or by using the powdery substance on their genitals. New Brunswick, New Jersey-based J&J has insisted the product is safe.

Juries in states including Missouri, California and New Jersey have handed down more than $5 billion in total awards to plaintiffs since suits started going to trial in 2016. However, some of those verdicts have been thrown out by judges. J&J has won verdicts or hung juries in other cases.

“Johnson & Johnson is committed to defending these cases based on the strong scientific evidence showing that talc does not cause cancer,” Ernie W. Knewitz, a company spokesman, said in an emailed statement.

“Of the last five trials in 2018, two were decided in our favor, and there have been hung-jury three mistrials, reflecting the juries’ appreciation of our argument,” Knewitz said. “Every case that has gone through the appellate process has also been reversed, and we feel confident that the five cases currently on appeal will be reversed as well.”

Still, the risk for the company is significant, according to Bloomberg Intelligence litigation analyst Holly Froum. To resolve almost 12,000 talc cases, J&J may have to cough up as much as $20 billion in settlements, Froum estimates. That would provide an average per-case payout of $1.67 million.

“I don’t believe they did anything wrong, but I think this is going to be a major overhang for a long time,’’ said Jeff Jonas, a portfolio manager at Gabelli Funds, which owns J&J shares. “I could see the number of lawsuits doubling or more, and just the cost to defend them all could reach into the billions.’’

Earlier this month, J&J settled its first baby-powder case, teaming up with talc supplier Imerys America Inc. to pay more than $1.5 million to settle a Manhattan woman’s claims. The company said the move didn’t signal it was open to the idea of a global settlement.

In 2019, there are at least 21 trials on court calendars targeting J&J over tainted talc, according to data compiled by Bloomberg, including more than 15 in California’s courts and one in Georgia set to start in March. In 2018, J&J defended itself in eight talc trials. While the company’s lawyers will be busier next year, scheduling delays and pre-trial maneuvering could result in cases being thrown out or trial dates pushed back.

Most of the California cases are in Los Angeles state court, where talc cases are consolidated. The first is scheduled for Jan. 4. Kirk Von Salzen, a retired computer salesman, said his asbestos-related cancer was linked to his 30-year use of baby powder. Von Salzen, who died recently, sought more than $12 million in damages. His family is continuing his case. In October, a jury deadlocked on Von Salzen’s claims in his first trial.

The real fireworks start in St. Louis on Jan. 22, when 13 claims by women who contracted ovarian cancer go before a jury. Five have died, and their cases are being pursued by family members. Each plaintiff, including St. Louis resident Vickie Forrest, used baby powder for decades before her illness was diagnosed. Their attorneys, who won the first four talc cases, will cite asbestos as a contributing factor, though the trial won’t be solely focused on it.

Things could get even more interesting in April, when veteran plaintiffs’ lawyer Mark Lanier, who engineered the $4.69 billion verdict, will present his next talc case on behalf of 24 women suffering from ovarian cancer. He has targeted asbestos as the cause of their illnesses. The women, who include a retired bank manager, a florist and a forklift driver, come from states such as Ohio, New York and Utah. Missouri law allows out-of-state plaintiffs to bring their claims because some of J&J’s talc products were made in Missouri.

J&J has been one of Lanier’s favorite targets over the years. He won a more than $1 billion verdict in 2016 over allegedly defective Pinnacle artificial hips. Two years earlier, he convinced a Louisiana jury to hand down a $9 billion verdict against Japanese drugmaker Takeda Pharmaceutical Co. and the U.S.’s Eli Lilly & Co. over problems with their Actos diabetes medicine.

“I’m sure J&J is quite sick of seeing Mark Lanier on the other side of these cases,” said Burch, the Georgia law professor. “He’s the last lawyer they want to have to face twice in the coming year.”

—With assistance from Cynthia Koons.

To contact the reporters on this story: Jef Feeley in Wilmington, Delaware at jfeeley@bloomberg.net; Margaret Cronin Fisk in Detroit at mcfisk@bloomberg.net

To contact the editors responsible for this story: David Glovin at dglovin@bloomberg.net Steve Stroth, Elizabeth Wollman