The Amazon.com Inc. Prime logo is displayed on computer screens for a photograph in Tiskilwa, Ill., April 23, 2014.
Photographer: Daniel Acker/Bloomberg

A U.S. safety regulator’s decision last week to sue could bring clarity to a question that has long befuddled courts and state legislatures nationwide: Who is responsible when a product bought from the world’s largest online retailer hurts or kills someone?

In recent years, dozens of people who say they were harmed by products, such as exploding hoverboards, defective batteries or faulty dog collars, have sued Amazon for compensation. The company argues it’s not liable, pointing instead to the third-party sellers that technically sold the items and are sometimes based overseas beyond the reach of U.S. jurisprudence. Several courts have agreed with Amazon, citing product liability laws that never contemplated online shopping or digital middlemen.

But last week, the U.S. Consumer Product Safety Commission Amazon, seeking to compel the company to participate in formal recalls of dozens of defective products sold by merchants on its sprawling marketplace. The regulator is also seeking what would be a precedent-setting ruling that Amazon is a distributor of consumer products under federal law, a designation that would subject the company to future mandatory recalls on behalf of its sellers. Declaring Amazon a distributor would upend a commonplace tech industry defense deployed by companies from Facebook to Google, which claim they aren’t responsible for what’s said, posted or sold on their platforms.

“If CPSC wins on this, it’s going to be a huge deal for Amazon,” says Boaz Green, a former agency staffer who now works for Neal Cohen Law advising companies that sell their products on Amazon. Product safety advocates and some in Congress have been calling for action to tame “what’s perceived as this Wild West, unregulated market, with all these small sellers they can’t get at. But they can get at Amazon, or they can try.”

A determination that Amazon is responsible for its third-party sellers would hold the company legally liable for instances where it failed to warn consumers of defective products or banned products resurfaced for sale again, potentially forcing the company to spend more time and money overseeing its web store. It would also likely increase Amazon’s insurance costs.

The battle involves an oft misunderstood feature of Amazon’s retail empire: Most items sold on Amazon.com aren’t owned by the Seattle company. Technically, they’re sold by third-party sellers, a category that encompasses established brands, mom-and-pop crafts makers and hundreds of thousands of Chinese manufacturers and distributors. Amazon charges a commission and other fees to list on the site. Increasingly, it also takes care of shipping and handling, under a program called Fulfillment by Amazon that charges sellers to store items in the company’s warehouses and send them on to customers after they click “Buy Now.” 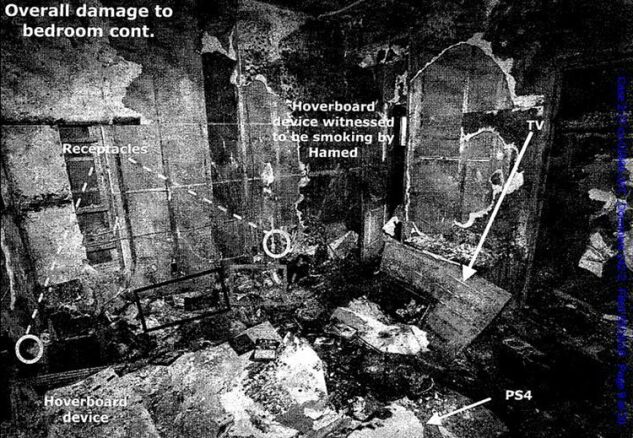 An image submitted as part of a court case shows fire damage allegedly caused by a hoverboard purchased on Amazon by an Arizona man.
Photographer: Case Document

The model helped fuel Amazon’s rise, stocking its shelves with an almost endless supply of goods. But the marketplace, which lets sellers sign up and manage their listings with largely self-service tools, has become increasingly difficult to control and patrol. When consumers are harmed by unsafe or counterfeit products, they have little choice but to try suing a company that has won more often than it has lost.

And because product liability rules are set at the state level, the of a California woman who sued and won after being burned in a fire allegedly sparked by a hoverboard she bought on Amazon had little bearing on the company’s earlier this year fending off a lawsuit from the parents of a toddler injured in Texas after swallowing a remote-control battery.

Product-liability cases have usually been decided on narrow issues such as whether Amazon took ownership of the items, or if it played a role in creating a market for a certain product. The company typically asserts that it’s a neutral marketplace, connecting buyers and sellers, or that it is protected from liability because other companies wrote item descriptions and arranged for product delivery. It has also sought to use as a shield Section 230 of the Communications Decency Act, a legal provision that grants web platforms immunity for content created by others.

Now the Feds are side-stepping that defense and lasering in on Amazon’s vast logistical operation. In the lawsuit filed last week, the CPSC says products stored and shipped by Amazon meet the distributor definition as laid out in the Consumer Product Safety Act, giving the agency the power to compel Amazon to cooperate with recalls of third-party products and levy penalties when it fails to do so. The CPSC is trying to get Amazon to participate in formal recalls of hundreds of thousands of hair dryers, carbon-monoxide alarms and children’s pajamas, sold by third parties but stored and shipped by the company.

At the Prosper Show, a conference for Amazon merchants held last week in Las Vegas, dozens of attendees sat in on a session about product safety rules, a topic that took on more importance in light of the CSPC lawsuit. Rachel Greer, a former Amazonian who now advises merchants, said the company began contacting clients who sell children’s sleepwear about eight months ago, hinting that regulators were sniffing around.

Amazon has been gradually getting more vigilant about product safety over the past several years, she said. A new product-safety team started work by 2016, and Amazon began requiring better product labeling on potentially hazardous products. Last year, the company started requesting compliance documents from those selling certain products to show they were meeting standards.

Amazon is fighting responsibility for recalls, Greer said, to avoid “this giant can of worms. There are so many items being imported that aren’t meeting requirements in the U.S. So if they do this recall, CPSC could say, ‘Great, now do the rest.’”

In emailed statements, Amazon said that, by contacting customers about defective products and issuing refunds, it had already done what CPSC aims to achieve with a formal recall.

“Amazon has always believed that we have an obligation to our customers to provide the safest shopping experience,” said company spokesperson Mary Kate McCarthy. “This is why Amazon has messaged customers and covered the cost of refunds when selling partners failed to engage with regulators about recalls.”

The company has also touted its work to make sure products on its marketplace are safe, including software that scans products for hazards, and requirements that sellers of some categories of goods upload product testing or other certificates.

Prior to the lawsuit, Amazon had proposed working with the CPSC to set up a voluntary system in which Amazon and other marketplaces would coordinate recalls on behalf of their sellers. Talks broke down, a spokesman for the agency said, when it was clear Amazon would refuse to go through formal, legally mandated recall processes.

In a , acting CPSC Chairman Robert Adler lamented that before it can carry out a recall of a product sold on a marketplace, the agency typically has to go through “a lengthy negotiation” with companies like Amazon to establish whether they’re even subject to regulation. “Clearly the current approach is not sustainable,” he wrote.

“This is a shot over the bow for online platforms in general,” Creighton Magid, a product liability and regulatory attorney with Dorsey & Whitney LLP, said of the lawsuit. It’s also a gamble for the roughly 500-person agency, which coordinates hundreds of product recalls but rarely seeks to take uncooperative manufacturers or retailers to court.

Magid, who represents businesses that must comply with product regulations, said the CPSC is an under-resourced agency that has to be very selective in what it does. Here, it’s “taking on an 800-pound gorilla,” he said.

The case could take years to resolve. It will first be heard by an administrative law judge; then parties can appeal to the full board of CPSC commissioners. From there, the loser could seek another hearing in federal district court.

In the meantime, state legislatures could act. California has considered a bill that would apply to online marketplaces the same liability standards as physical retailers, but it stalled as appeals courts found Amazon responsible for marketplace products under existing law. Amazon offered support for that bill if it would encompass all marketplaces, spreading around the costs of compliance that Amazon is well positioned to bear. Amazon’s smaller rivals, and a trade group representing EBay Inc., Etsy Inc and Shopify Inc., opposed the measure.

“Somebody needs to pay for the harm,” says Daniel Hinkle, a senior state affairs counsel with the American Association for Justice, a trade group for trial lawyers. “Because if they don’t pay for the harm, it’s the consumer that does. They’re the ones who are out a home, a car or a child, or are relegated to a wheelchair for the rest of their lives.”