Privacy advocates and criminal defense lawyers are looking to a robbery case in a Virginia federal court as a high-profile legal test for law enforcement’s growing use of location data from to identify suspects.

The robbery case, which is expected to result in a ruling soon, is considered the first federal example of a criminal defendant challenging the use of a such data as evidence in his indictment. Other courts have weighed in on whether law enforcement should gain access to Google’s location data for their investigations, but few of those opinions are made public or easy to find, because warrant requests and responses are often kept sealed.

The ruling looms as a recently released Google report shows state and local law enforcement are increasingly turning to the tech giant’s trove of user location data in a bid to find suspects for robberies or other crimes. These so-called geofence warrants are based on a virtual perimeter surrounding a geographic area of interest.

Geofence warrants raise questions for privacy protections under the Fourth Amendment and whether law enforcement should use Google’s data in investigations.

“This technology was designed to sell ads, not solve bank robberies,” said Michael Price, litigation director for the Fourth Amendment Center at the National Association of Criminal Defense Lawyers.

Price is defending Okello Chatrie, a man accused of robbing a bank in Richmond, Va., in the case before the U.S. District Court for the Eastern District of Virginia. Law enforcement found Chatrie with the help of location data from Google. Chatrie has pleaded not guilty.

Price expects District Judge to issue a decision in the case soon, following an oral argument in June. Lawyers from the Justice Department who represent law enforcement in the case didn’t respond to requests for comment.

Chatrie’s lawyers argue that the warrant used to collect Google location data is unconstitutional because law enforcement cast a broad net to find a suspect, capturing other people’s information in the process.

“Geofence warrants have drawn criticism because they can capture and reveal considerable amounts of information about people who simply happen to be in the area, but have no actual connection to the subject of the warrant,” said John Seiver, who litigates privacy cases for Davis Wright Tremaine LLP.

Courts typically have accepted that collecting unrelated data is “inevitable,” Seiver said, so it comes down to whether the warrant’s search area is reasonably drawn to boost the chances of finding evidence.

In another case concerning the search for suspects in 10 fires in the Chicago area, a federal judge in Illinois approved a government request for location data from Google. The judge ruled that the warrant was structured to maximize the potential for capturing data on suspects and witnesses while minimizing the potential for gathering data on other people who weren’t involved in the fires. 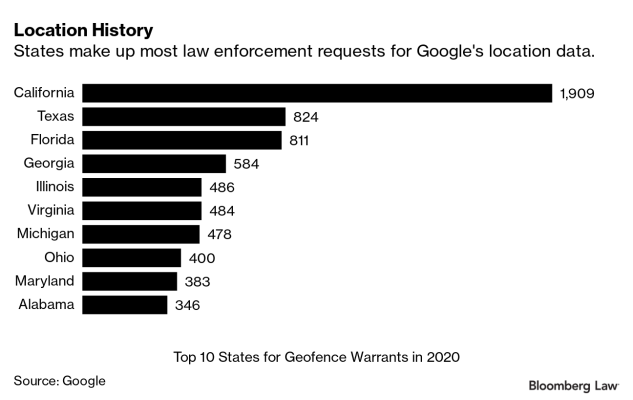 Google says it reviews each location data request to “make sure it satisfies applicable laws,” and the company notifies users when their identifying information is disclosed in response to a geofence warrant, “unless expressly prohibited by law or a court order,” according to its report.

“As with all law enforcement requests, we have a rigorous process that is designed to protect the privacy of our users while supporting the important work of law enforcement,” a Google spokeswoman said. “We developed a process specifically for these requests that is designed to honor our legal obligations while narrowing the scope of data disclosed.”

In the bank robbery case, Justice Department lawyers argue that investigators’ search for a suspect was narrow enough to find evidence, adding that Google users give up their expectation of privacy when they let the company collect data on their location.

That kind of data is recorded when people agree to share their location history with Google. Turning on the location history setting allows Google services such as Maps to offer tools including real-time traffic predictions and restaurant recommendations, according to the company.

While Google isn’t taking a side in Chatrie’s case, the company is urging the Virginia court to rule that law enforcement must obtain a warrant supported by probable cause to gain access to its location history records.

Google’s data is more precise than other location information that’s collected when a mobile phone pings nearby cell towers because it also relies on GPS signals and signals from nearby Wi-Fi networks or Bluetooth devices. The U.S. Supreme Court ruled in 2018 in Carpenter v. United States that a warrant is required for law enforcement officials to access historical location data from cell towers.

Privacy advocates take issue with the process for approving searches of Google’s location data. Geofence warrants are frequently “rubber-stamped” by judges and there are few public decisions on them, according to Jennifer Lynch, surveillance litigation director at the nonprofit Electronic Frontier Foundation.

“The way that warrants are approved is generally not transparent,” Lynch said. She added that it’s difficult to follow geofence warrants in state courts, since they don’t use the same tracking system as federal courts.

Google’s report showed that the vast majority of the location data requests its receives come from states such as California, Texas, and Florida, rather than at the federal level. The report’s release came after groups led by the Surveillance Technology Oversight Project, known as STOP, called for more insight into how many geofence warrants Google receives.