Cashless retail policies such as those at Sweetgreen have sparked concerns about privacy and discrimination.
Photographer: Adam Glanzman/Bloomberg

New York City is finalizing a plan to ban cashless stores at places such as and joining a growing list of cities and states requiring businesses to accept cash payment over privacy and bias concerns.

Mayor Bill de Blasio’s office and the bill’s sponsor, City Councilman Ritchie Torres (D), are working together to shape a bill, introduced in February, that could go before the full council as early as this summer, said Raymond Rodriguez, Torres’ deputy chief of staff.

“The goal is to protect populations who don’t own bank accounts or who want to use cash to protect their privacy, as well as senior consumers who are used to paying in cash,” Torres said in an email.

New York would be the largest city to mandate that stores accept cash transactions if the bill passes. Philadelphia agreed in March to ban cashless stores, and San Francisco passed its ban in May. They joined Massachusetts and New Jersey in prohibiting no-cash retail transactions. Connecticut lawmakers are swiftly moving cashless ban legislation, and Washington D.C.,'s council has introduced its own cashless ban bill. On the federal level, House Democrats have introduced two bills banning cashless policies, but neither has moved forward.

Opponents of no-cash policies say such rules eliminate options for those who feel paying electronically jeopardizes privacy and security. Digital and card-based transactions allow banks, stores, and app providers to track a person’s habits and can expose users to fraud, Lauren Saunders, an associate at the National Consumer Law Center, said.

“You don’t know how your data is going to be used, either by the store or by your bank,” Saunders said. “You can also be exposed to identity theft.” 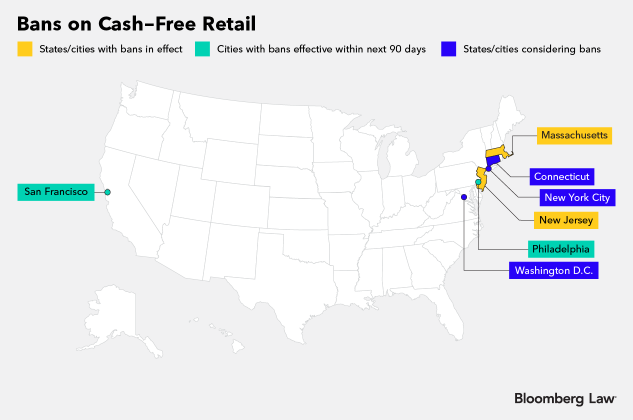 A bill banning cashless stores in Connecticut easily passed the House on May 16 and will be up for a Senate vote this summer, according to the bill’s House sponsor, state Rep. Holly Cheeseman (R). She gave the bill a 60-40 chance of passing the Senate by the end of this year’s legislative session, which adjourns June 5.

“Once everything is totally electronic, there is always a record. Given the prevalence of problems with cybersecurity, it increases your ability to be hacked,” Cheeseman said, explaining her support for mandating cash transactions.

The D.C. City Council has not yet scheduled a hearing on its proposed cashless ban.

New Jersey banned cashless stores, with exceptions for parking garages and airports. One of the few physical cashless Amazon bookstores, located in Paramus, N.J., now allows customers to pay with cash in compliance with the law.

Massachusetts has had a similar law on the books since 1978, long before cashless purchases could be tracked by stores, banks, and other tech providers. The state bans cashless “retail establishments,” defined as any premises on which services or tangible products are sold.

Most municipal and state laws make exceptions for online retail, airports, car rental facilities, and parking garages—sectors where cash purchases aren’t possible or where cards act as a form of collateral. New York City’s potential ban could include similar carveouts, such as an exception for stadiums and arenas that allow consumers to bring cash and exchange them for a stadium-specific purchasing card, Rodriguez said.

Fines of $2,000 in Philadelphia and as high as $5,000 in New Jersey await those who violate the cashless bans.

The National Retail Federation, an industry trade group, opposes legislation that regulates payment methods. Retailers should be able to decide methods for themselves, the group’s senior vice president and general counsel, Stephanie Martz, said in a statement.

“These proposals are a solution in search of the problem, since cashless stores are fairly uncommon and many businesses actually prefer cash payments in order to avoid credit-card transaction fees,” Martz said.

Some retailers with cashless-only policies are in urban areas and may have concerns about robbery risks and employee safety, said attorney Rich Zukowsky, who specializes in the financial services industry and fintech for Davis Wright Tremaine LLP.

Saunders, however, said cashless policies discriminate against those who don’t qualify for a bank checking or debit account.

“We have federal law that says cash is legal tender for all purchases public and private,” Saunders said.

Sweetgreen, a Philadelphia-based salad chain which touted cashless-only retail as a model of efficiency and futuristic tech, admitted in an April statement its policy had unintentionally disadvantaged some customers. The chain plans to allow cash purchases nationwide by the end of 2019. Amazon.com Inc. plans for all of its brick-and-mortar stores to accept cash by the end of 2019, a company spokeswoman said.