White law school graduates were significantly more likely to pass the bar exam than test takers from other racial and ethnic groups, according to a new American Bar Association survey that breaks down demographic data among test takers for the first time.

About 83% of law school graduates passed the bar exam on their first try last year, the ABA survey released Tuesday found. White first-time test takers passed at a rate of 88% in 2020, compared with 80% of Asians, 78% of Native Americans, 76% of Hispanics and 66% of Black test takers.

The new data comes as the legal industry continues to struggle to diversify its ranks. The survey also follows calls by some advocates to scrap the biannual bar exam altogether, citing racial disparities they say are the result of inherent bias and social and economic barriers to legal education. 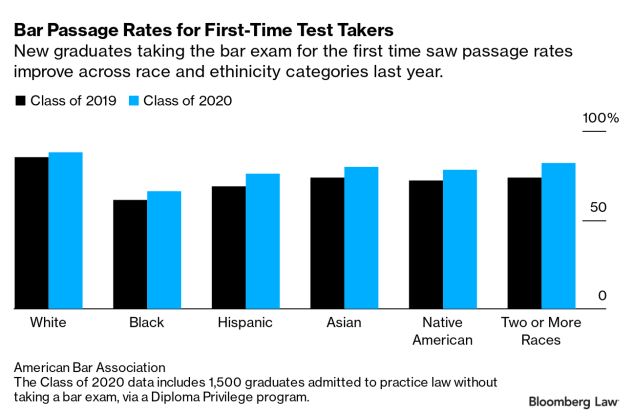 The number of law school grads who became licensed to practice without first passing the bar rose, according to the survey. More than 1,500 were admitted to the bar via diploma privilege in 2020. That compares with the roughly 350 grads were admitted via privilege in the preceding two years.

The jump occurred because a handful of states, including Washington, Oregon, and Utah, temporarily allowed the privilege last year in response to hardships law school grads faced because of the pandemic. Wisconsin and New Hampshire were the only states that allowed diploma privilege before last year.

California and several states that moved their tests online for the first time last year reported an upswing in passage rates.

Nearly three out of four first-time test takers passed California’s October 2020 bar exam, a rate that jumped to the highest level in a dozen years. The California test had been moved online for the first time as a result of Covid-19. By then, the state’s minimum passing score had also been reduced.

A total of 74% of first-time takers passed the California bar exam, up from 64% in the July 2019 test, which was held in-person. Most states are preparing to return to in-person tests for next test period in February 2022.

“NCBE has read with interest the information provided by the American Bar Association Section of Legal Education and Admissions to the Bar about pass rates based on race, ethnicity, and gender,” National Conference of Bar Examiners spokeswoman Valerie Hickman said in a statement on behalf of the group. “It is difficult to draw specific conclusions based on this limited data, as research has shown that several factors predict bar success.”