As many as 60% of Covid-19 cases in the U.S. have gone unreported, and the coronavirus has infected nearly 1 in 5 Americans, according to a new model out of the University of Washington.

The model, which aims to mitigate biases in data capture, estimates that 65 million people, or 19.7% of U.S. residents, had been infected as of March 7. The findings, which appear in Monday’s issue of Proceedings of the National Academy of Sciences, indicate the U.S. is unlikely to reach community level protection without continuing an ambitious vaccination campaign.

“That is kind of what we’re seeing now with the delta variant because it’s highly transmissible and it’s ripping through communities of people who haven’t been vaccinated yet,” lead author Nicholas Irons said. “There’s still a lot of potential for more deaths to occur if we don’t stay vigilant, and we don’t try to get as many shots in arms as possible.”

The case count is probably higher now, although not too much higher, since the vaccines have started to roll out, Irons said.

The statistical model developed by Irons, a UW doctoral student in statistics, and Adrian Raftery, a UW professor of statistics and sociology, marks the latest effort to capture the true prevalence of Covid-19 in the U.S.

A study published earlier this month by Hazhir Rahmandad, TY Lim, and John Sterman of Massachusetts Institute of Technology found infections to be 12 times higher than previously reported. A University of Minnesota study published in January in JAMA Network Open estimated 35% of deaths went unreported.

There have been more than 34 million confirmed cases and nearly 611,000 deaths as of July 26, according to Bloomberg’s Covid-19 tracker, which is similar to data from the Centers for Disease Control and Prevention. At the same time, the CDC estimates the actual case counts are much higher. Between February 2020 and March 2021, there were 114.6 million infections, 97.1 million symptomatic illnesses, and 5.6 million hospitalizations, the CDC estimated.

Taking the two main streams of data, cases and deaths, and dividing the cases by the number of tests can yield the test positivity rate. But that leads to data bias, Irons said.

“Someone who has Covid is much more likely to get tested than someone who doesn’t have it. And as a result, the test positivity rates are much higher than the actual proportion of people in the population who have the disease,” he said. “It wasn’t necessarily a good indicator for various reasons of what’s actually going on on the ground.” 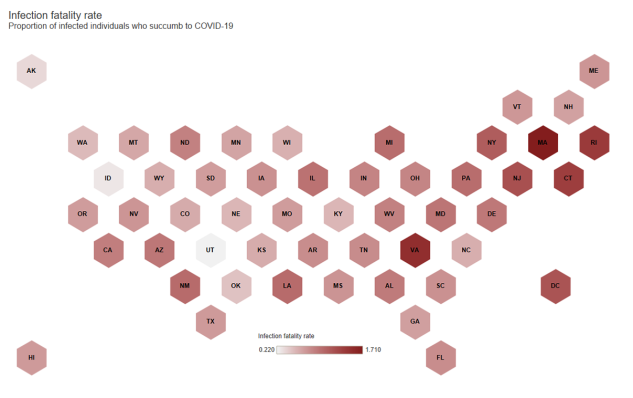 Irons and Raftery pulled data from The COVID Tracking Project, which stopped collecting data March 7, on confirmed Covid-19 cases, deaths, and tests administered each day. They also incorporated results from randomized tests in Indiana and Ohio, where researchers randomly sampled their population with molecular and blood tests.

“That’s the only way to get an unbiased picture of what’s actually happening in any given state at any point in time with the infection. So without that, we really couldn’t have done the study” Irons said. “The idea behind the study was to kind of leverage those unbiased results that we have for those two states to develop a model that would allow us to de-bias the various other forms of Covid data that are more widely reported, and that people are more familiar with, like numbers of cases on each day.”

They estimate the U.S had an undercount factor of 2.3, which means for every confirmed infection, there are 2.3 cases that weren’t being confirmed through testing. But they also found the undercount rate also varied widely by state, depending on the severity of the pandemic and the availability of testing and access to medical care.

Raftery said in a statement their model can help determine the true burden of disease, both in this pandemic and the next one, by incorporating randomized testing models. “We think this tool can make a difference by giving the people in charge a more accurate picture of how many people are infected, and what fraction of them are being missed by current testing and treatment efforts.”