Welcome back to the Big Law Business column on the changing legal marketplace written by me, Roy Strom. This week, we investigate why a recent survey found 15-year-olds aren’t as interested in becoming lawyers as they once were.

It was a big week for news impacting the future of the legal profession.

The American Bar Association passed a resolution encouraging states to experiment with new regulatory structures that could one day make it possible for law firms to be owned by people other than lawyers.

The ABA also released statistics that continued a recent streak of good news about the state of the country’s law schools. About 90% of law school graduates passed the bar exam within two years of graduation.

Such data may ease concerns that arose in the wake of the Great Recession that law schools were failing to attract talented students. After all, law grads are still smart enough to pass the bar. But there are reasons to be concerned about the legal profession’s ability to capture the interest of the next generation.

A survey asking 15-year-olds what occupation they wanted to pursue showed that teenagers were not as interested in becoming lawyers in 2018 as they were in 2000. The survey was conducted across 41 countries by the Organisation for Economic Co-operation and Development, a policy group consisting of 36 member countries, and released last month.

The decline came even as youth interest clustered around other traditional occupations. More kids wanted to be doctors, business managers, and engineers in 2018.

You might say, ‘What do 15-year-olds really know about themselves?’ Fair question.

Still, it’s interesting that aspiring to be a lawyer is not as common as it was a couple of decades ago. A decline in the popularity of law school could have repercussions for a profession whose stock-in-trade remains the brain power of the people it can recruit.

Not according to a long-running Gallup poll that tracks opinions of ethics and honesty in various professions. A steady portion of respondents, mostly between 16% and 22%, have rated lawyers’ ethics and honesty as “high” or “very high” between 2000 and 2019. 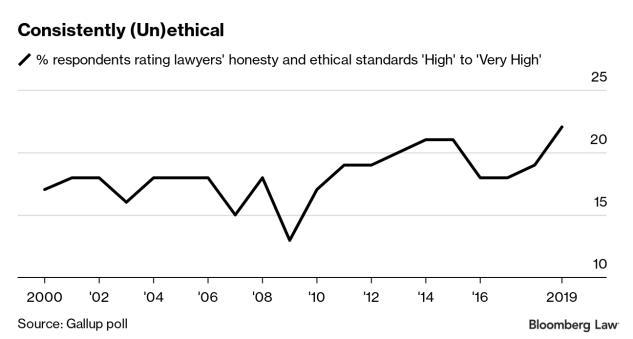 That’s good news. But that steady support isn’t translating to comparable growth in law school interest. We’ve already seen a significant dip in the relative popularity of becoming a lawyer among college graduates.

Sure, the recent news about law schools has been relatively positive. More people have taken the law school admissions test in four straight years. And first-year law school class sizes are stabilizing. But neither are keeping pace with the growth in four-year college graduates.

From 2000 to 2017, the latest year data are available, the number of U.S. bachelor’s degrees conferred rose 57%, according to the National Center for Education Statistics. Enrollment in all U.S. post-baccalaureate programs rose 39% during that time.

Meanwhile, the number of LSAT takers through 2019 has risen 30% and the number of first-year law students has decreased by 12%, according to data from Law School Admissions Council ad Law School Transparency. 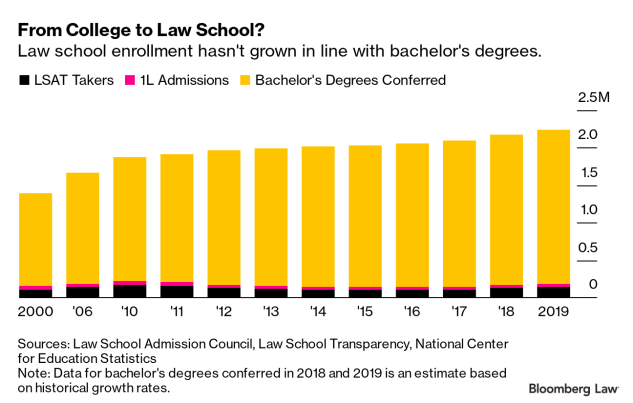 Maybe it’s that law school has become too expensive.

But that argument isn’t as persuasive when compared to trends in medical school. Remember, the recently surveyed teens are more interested in becoming a doctor these days. 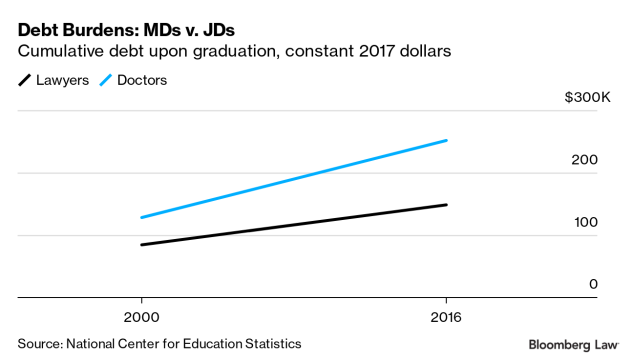 Maybe you just can’t reason with a 15-year-old.

Either way, I called James Goodnow, the CEO of Fennemore Craig. At 38, he is one of the few millennials leading a major law firm. I asked why he thought younger people may not be as interested in a legal career.

He said it was likely a combination of factors. The debt, a negative public image of lawyers, and the law’s “hierarchical” style discouraging today’s youth.

“Law firms and the legal industry really represents the pinnacle of hierarchy,” Goodnow said. “You have structures like associates, partners, and all these levels. That is really anathema to what I think a lot of Gen Z or Millennials are looking for in a work environment. They are looking for more entrepreneurial places where you can be creative.”

Goodnow said that may lead to the legal profession failing to attract “the most creative” young students, which would be a bad outcome for the country’s law firms.

“They will be the innovators, the change agents, the drivers of reforms for new ways to deliver legal services,” he said. “And that is exactly what is needed.”

On Litigation Finance: With the help of litigation finance firm Bentham IMF, Quinn Emanuel was nimble enough to turn an indigent client’s case into a $6 million payout. Now a U.S. bankruptcy trustee wants the money back.

On Supreme Court Clerks: There will always be Supreme Court clerks, and Jones Day will (presumably) be interested in hiring them. The firm hired five clerks from the last term and now has brought on 55 since the 2011 term.