A sign for the Food And Drug Administration is seen outside of the headquarters in White Oak, Maryland.
Photographer: Sarah Silbiger/Getty Images

A controversial preterm birth drug is reigniting a debate among doctors on whether keeping fast-tracked drugs on the market without a clear clinical benefit worsens racial health disparities.

The Food and Drug Administration is expected in the coming months to decide whether to withdraw Covis Pharma’s Makena, which the FDA approved through its accelerated pathway in 2011. If it’s removed from the market, it would mark the first withdrawal of an accelerated drug approval in more than 10 years.

Makena was designed to reduce the risk of preterm birth among patients who previously had an unexplained delivery before 37 weeks of pregnancy.

Removing the drug from the market would be particularly harmful to Black patients, who disproportionately face higher rates of preterm birth, the drugmaker and patient advocacy groups have said. Some of the groups received funding from Covis and Makena’s prior manufacturers.

But prescribing a treatment with little evidence it works could subject minority groups to financial costs and exacerbated health risks, doctors and bioethicists argue.

“What patients need is not just an approved product, they need products that are actually going to be clinically beneficial,” said Holly Fernandez Lynch, an assistant professor of bioethics and law at the University of Pennsylvania.

“We don’t want to just allow products on the market in hopes they work, because it really is not what patients need,” she added.

The pending Makena decision comes amid a broader push for change to the FDA’s accelerated approval pathway, which is designed to speed up access to medicines by relying on biomarkers, or a surrogate endpoint like a laboratory measure, to predict a drug’s clinical benefit.

Lawmakers are aiming to get added to an end-of-year government spending package provisions that would give the FDA more tools to withdraw fast-tracked drugs that lack a confirmed clinical benefit. 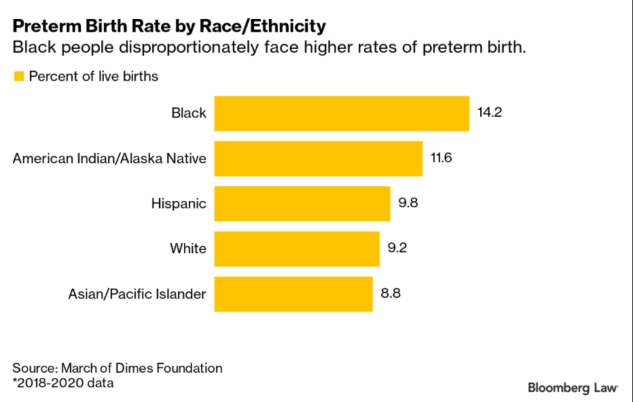 The FDA’s Center for Drug Evaluation and Research first proposed in October 2020 that Makena be removed from the market because the required postmarket study failed to verify clinical benefit.

A panel of independent advisers to the FDA voted overwhelmingly on Oct. 19 to recommend withdrawing the drug.

Covis acknowledged that its confirmatory trial didn’t show a clear clinical benefit. But the drug should be allowed to remain on the market to allow for follow-up studies among groups at higher risk for preterm birth, including Black women, Covis said.

A small clinical trial from 2003 funded by the US National Institute of Child Health and Human Development showed some promise that 17 alpha-hydroxyprogesterone caproate, later approved as Makena, could help reduce the risk of preterm birth among women who had a previous unexpected delivery. The study, widely known as the Meis trial, was conducted in the US with nearly 60% of Black participants, and has been cited by Makena’s supporters as indication that the drug could be beneficial for higher risk groups.

Yolanda Lawson, an associate attending physician at Baylor University Medical Center and president-elect of the National Medical Association, spoke in support of keeping Makena on the market during October’s advisory committee hearings. She said in an interview that the Meis trial findings showed a “demonstrated benefit” for higher-risk groups.

“Being in practice, I can think of just off the top of my head at least three patients who had lost babies, had never even had a live-born child, but with the use of the medication and other measures, they were able to have full-term, healthy babies,” Lawson said.

Covis also argued in the hearings that removing Makena from the market would fuel uncertainty in the safety of the drug, making it harder to recruit trial participants, especially minority groups with historic mistrust in medical research due to decades of past abuses.

“It could definitely create a doubt and suspicion” among patients on whether the drug is safe, Lawson said.

Doctors and bioethicists in favor of removing Makena from the market say they don’t buy into Covis’ argument, and that allowing doctors to continue prescribing the drug can open up patients to risk with little chance of benefit.

Using health equity as an argument to keep a drug on the market is “an unethical use of the term,” Adriane Fugh-Berman, a professor of pharmacology and physiology at Georgetown University, said.

“Any level of risk is only worth it if the drug actually has a benefit, and this doesn’t have a benefit,” she said. The drug’s known side effects include migraines, blood clots, and hypertension.

Adam C. Urato, a Massachusetts-based maternal-fetal medicine physician, was one of the people behind the 2019 citizen petition to the FDA requesting Makena’s withdrawal. He said in an interview that health-care providers like himself “don’t want to give pregnant women medications or do things to them that haven’t been proven to be safe and to be effective and to have a clinical health benefit.”

“Health equity is a laudable goal, and we want everyone doing well,” Urato said. But health equity can also “be used as a spin campaign, basically, to increase sales and profits, or to keep drugs on the market.”

Both the FDA and lawmakers have pushed for legislative changes to minimize the amount of time between when a drug enters the market and completion of studies demonstrating a clinical benefit.

“It’s taken FDA two years after its initially recommended withdrawal to get to this stage,” Fernandez Lynch said on Makena. “We need a truly expedited pathway for withdrawal once we’ve decided that the product should no longer be marketed.”

Part of promoting the success of the accelerated pathway should also be ensuring that confirmatory trial populations are representative of the disease population’s makeup, Fernandez Lynch said.

Fugh-Berman said that Congress’ recent effort to revamp accelerated approval, which was included in a House-passed user fee package (H.R. 7667) but dropped from the final language, is “not going to be enough.” She pointed to a range of additional recommendations included in a September white paper from PharmedOut, such as making randomized, controlled trials the default within the accelerated approval program and allowing for automatic withdrawal of approval when post-market requirements aren’t met by a certain date.

“The whole accelerated approval process has to be revamped in order to protect patients,” she said.