Companies creating lab-grown steak, chicken, and fish see a recent White House announcement as a signal that meat grown without animal slaughter is on the cusp of being legally sold and eaten in the US.

“We are laser focused on commercial-scale production, and for us, that means moving into competing with conventional meat products in scale,” said Eric Schulze, vice president of product and regulation at Upside Foods, a cultivated meat company, as the industry calls itself. The goal is to be selling its meat on the US market within the year.

“It’s a slap in the face to cow-calf producers and farmers across the land,” said Don Schiefelbein, president of the trade group National Cattlemen’s Beef Association.

The world’s first commercially available lab-grown chicken nuggets were sold just two years ago in Singapore. That’s still the only country where meat grown artificially from animal cells is eaten. But startups and a few established food companies in the US say they have products ready to go; companies in Israel are close to bringing theirs to market; and China signaled it could allow lab-grown meat sales within the next five years. 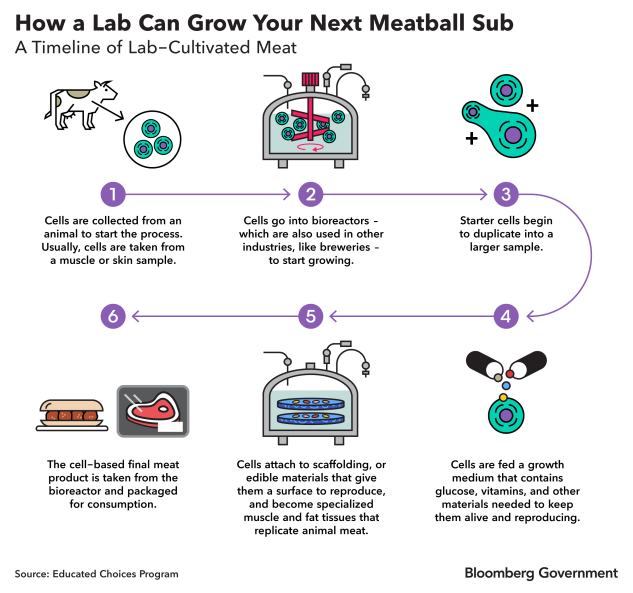 But farmers and ranchers question whether the food should even be classified as meat.

“It should be differentiated somehow, some way, so that the consumer can know whether they’re consuming something that was grown on a farm or ranch—or something that was grown in a petri dish,” said Lia Biondo, an associate at Western Skies Strategies, a public relations and lobbying firm that works with the US Cattlemen’s Association and other agriculture groups.

Read More: Is Beef the New Coal? Climate-Friendly Eating Is on the Rise

In marketing alternative proteins, plant-based meat has shown just how important labeling can be. Impossible Foods, which reported last year that its fourth-quarter retail revenue soared by 85%, made its name by selling plant-based “burgers,” “sausages,” and “pork.” And like cultured meat companies, Impossible defended itself against a cattlemen’s group that tried to get meat-specific terms banned on its labels.

Lab-grown meat is genetically meat, not plant protein packaged in a patty to mimic the look and taste of beef or chicken.

The process for growing cultivated meat varies by company and the type of meat, but the steps are similar: collect an animal’s cell samples, place them in a bioreactor, feed the cells, and harvest them after they multiply into meat.

Starter cells can be sourced from a living animal using a biopsy, and “banked” to eventually start multiple growth processes. Each bioreactor needs starter cells, so companies tend to keep a bank of cell lines on hand to draw from as needed.

The cells are fed nutrients including vitamins and amino acids. They then multiply, and ultimately grow into the animal muscles and tissues consumers know as meat. 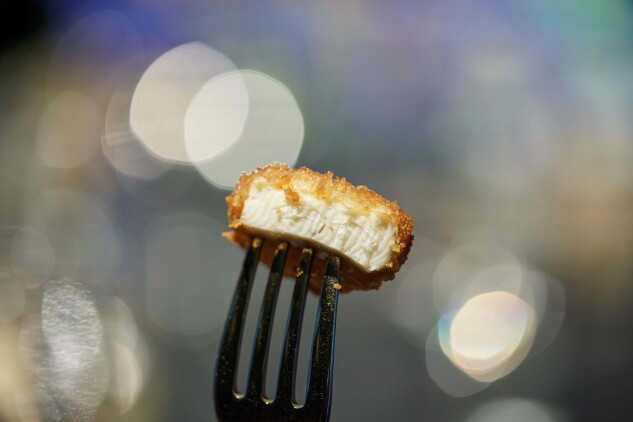 For California-based Upside Foods, which was founded in 2015 and calls itself the world’s first cultivated meat company, growing chicken starts with a master bank of cell lines, which are thawed for about a week before going into a bioreactor, or “cultivator.” Cells begin to duplicate and are fed a growth medium that contains glucose, vitamins, and other nutrients needed to keep them alive and reproducing, which generally takes one to two weeks.

Upside has patented cultivators designed to grow a whole cut chicken. Many other lab-grown meat companies use scaffolding, an edible surface where cells can reproduce. For Upside, the differentiation into specialized muscle and fat tissues lasts for anywhere from a few days to two weeks, depending on the type of chicken.

After three to five days of formulation and packaging, Upside’s chicken is consumer-ready. It doesn’t look like a leg or a wing, but is biologically identical to farm-raised chicken meat, and can be shaped into things like boneless chicken “breast” or chicken nuggets. Upside says it tastes the same, too.

Upside says its chicken can be harvested after as little as two weeks. A live chicken in an industrial farm, in contrast, is typically killed after six weeks at the earliest. While lab growth timelines vary based on the type of meat and the producer, companies like Upside point out that their process can be more efficient than traditional chicken.

While most of the hundred or so companies getting into the business in the US are startups, SA, the world’s largest meat producer, is investing $100 million in cultivated meat. It has acquired cultivated meat startup Biotech Foods, and has a research and development center for cultivated protein in Brazil, and a pilot facility in Spain.

The US doesn’t yet allow selling meat that isn’t cut from a once-living animal, but in 2018 the Food and Drug Administration and the Agriculture Department agreed to share regulation of the eventual market. What that looks like in reality is still unclear.

The Agriculture Department last year issued an advanced notice of proposed rulemaking on the labeling of cultivated meat and poultry products, and granted $10 million to create a center for excellence in cellular agriculture at Tufts University.

An FDA spokesperson said the agency and USDA will “continue to work in collaboration to develop more detailed procedures to facilitate coordination of our shared regulatory oversight, including developing coordinated labeling principles for livestock/poultry and seafood products made from cultured animal cells. We cannot speculate about the timing of market entry.”

The USDA’s Food Safety and Inspection Service, too, said the agency is working on developing a labeling rule, but can’t yet comment on a timeline.

Once the food is legal for sale, the FDA will regulate the collection of animal cells, while the Agriculture Department will oversee packaging and processing of the final meat products.

“But they still are trying to figure out exactly how that breakdown looks, and I think it’s going to be clunky for companies when they have to go through it,” said Emily Broad Leib, a founding director at the Harvard Law School Food Law and Policy Clinic.

“How is that going to work in practice?” she said of the shared regulatory framework. “They’ve already signaled that that requires more details.”

A Dutch pharmacologist premiered the first lab-grown burger patty in 2013—at a cost of more than $300,000. Startups are now fine-tuning lab-grown meatballs, sausages, steaks, fish—and even foie gras —which they say will eventually be price competitive with farm-raised meat.

An open question is how consumers will be able to tell the difference. 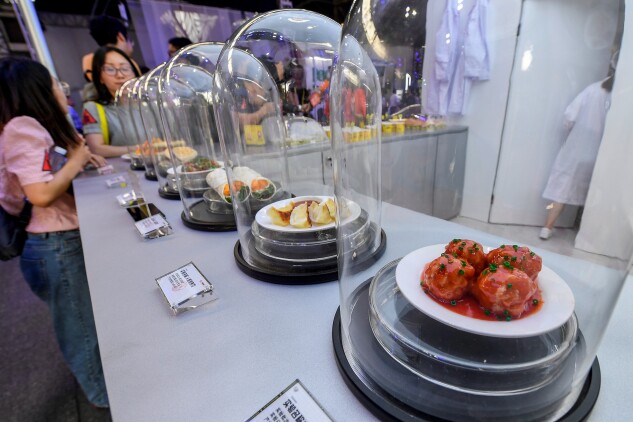 Dishes made with cultured meat are seen ahead of an exhibition in Hangzhou, China, on Sept. 11, 2019.
Photographer: STR/AFP via Getty Images

The US Cattlemen’s Association wants terms like “meat” and “beef” reserved for food from slaughtered animals, and submitted a petition to the USDA’s Food Safety and Inspection Service, the agency’s enforcement arm, to ban the terms in lab-grown products. While it was denied, the agency is still deciding what this slaughterless meat can be called.

The lab-grown meat industry largely agrees their products should be labeled differently from traditional meat, contending that customers will want to choose their meat for the climate benefits and novelty. For many in the business, the preferred term is “cultivated” meat, which they see as as transparent but not unappetizing.

“We need to build trust with consumers that way,” said Denneal Jamison-McClung, the director of the UC Davis Biotechnology Program, speaking at the school’s recent Cultivated Meat and Alternative Proteins Summit.