Margot Cullen noticed a rash with raised pinpoint bumps on the stomach and neck of her now 21-month-old son in the beginning of March. Then the fevers started.

Alex tested positive for coronavirus on March 15, becoming one of the 2.2% of all Covid-19 cases that were in children under 5 as of Aug. 5, according to the U.S. Centers for Disease Control and Prevention. He’s had a fever every day since. They range from 100.4 degrees, which is enough to keep him out of day care, to a high of 102.1.

Listen to the story here.

Perplexed as to why Alex had fevers long after his initial infection, his doctors in New York recommended monitoring him for two days at Albany Medical Center Hospital in May. Now Cullen’s insurance is refusing to cover the 48-hour stay, saying it “did not meet Fidelis Care’s meaning of ‘necessary medical care,’” the insurer said in a May 21 letter.

Health insurance companies have tremendous power to decide what their plans will and won’t pay for, and “medical necessity” is one of their tools to deny claims. It’s a standard derived from medical research and gold standards of care—in other words, it’s based on what’s worked in the past.

For long Covid, there is no past, no standards of care, and very little research. So some treatments for long-Covid conditions, even if ordered by a doctor, are being deemed not medically necessary or experimental, prompting insurance companies to deny claims.

It’s not clear how widely that tool is being used. Courts generally don’t allow legal challenges to be brought until the insurers’ internal appeals processes are exhausted, and states often can’t step in because they lack regulatory authority over many health plans. But some long haulers are running up against these type of denials, and doctors say having to fight insurers can worsen their conditions.

“They want me to prove something I can’t prove, and a scientist can tell you we can’t prove this, but they want that information and I just can’t give it to them,” said Sarah Sedor, 39, a long hauler from Chattanooga, Tenn. She needs a neuropsychological test that isn’t covered by her insurance to help get disability benefits.

Linda Bergthold, a former health policy researcher at Stanford University’s Center for Health Policy, helped develop a standard for medical necessity in 1999 that many insurers now use.

That standard says the treatment should be for the purpose of treating a medical condition, cost effective, appropriate for the patient, and known to be effective from scientific evidence, professional standards, or an expert.

When there are no guidelines or standard of care for an illness or condition, a treatment may be considered experimental and plans can refuse to cover it, said Bergthold, who is now an independent consultant.

Because Covid-19 is so new and because the research is scant, “some treatments will not have clear evidence of effectiveness,” she said. “Insurance companies will make their own individual decisions at this point.”

That’s why denied two claims totaling $800 for speech therapy-sessions ordered for Sedor, who has struggled with cognitive issues associated with long Covid since having a mild case in February.

Sedor knew something wasn’t right when she couldn’t remember her work password after 10 days off with Covid-19. “I called the help desk, got it reset and was trying to set up all the applications I use, and I had no idea what I was doing,” she said. Now, she says she has trouble remembering the steps to get herself dressed and ready in the morning.

In letters dated May 19 and May 31, Cigna told Sedor her speech therapy was “considered experimental, investigational or unproven for the diagnosis,” which was listed as “cognitive communication deficit.”

The company later reversed itself, calling Sedor to say it would pay her claim after Bloomberg Law contacted it for this story.

In a statement, Cigna said its coverage policies are based on published medical literature and clinical expertise.

“We are committed to ensuring those struggling with the long-term symptoms of COVID-19 get the care they need while the medical community works to best implement clinical guidelines and best practices,” the company said.

“We encourage any customer that believes a claim was denied in error to appeal it, and we strive to resolve any issue that arises for our customers quickly.” 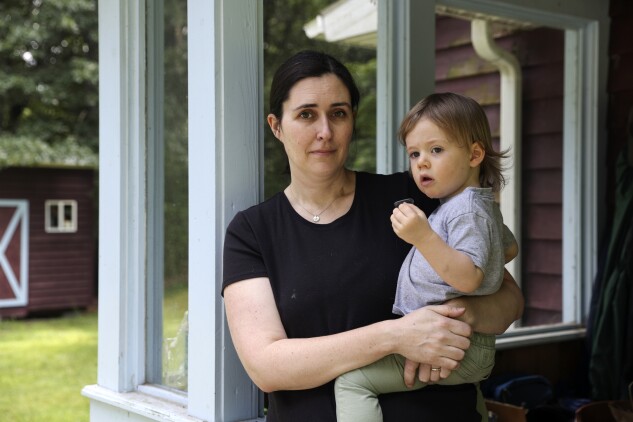 Fidelis Care, Margot Cullen’s insurance company, said certain criteria for “Sepsis and Other Febrile Illness, without Focal Infection, Pediatric” had to have been met for her son’s hospitalization to have been authorized. Those criteria are listed in guidelines developed by MCG, the insurer said in its denial letter. MCG is a company that develops standard of care guidelines for health-care providers and insurance plans.

“You were admitted to the hospital for fever without a source,” Fidelis Care wrote.

Which was the very point of Alex’s hospital stay—doctors wanted to find out if anything else could be causing the fevers. Alex had been cutting new teeth, “but teething fevers don’t last 15 weeks,” said Cullen, who lives in Woodstock, N.Y.

In a statement to Bloomberg Law, Fidelis Care said it can’t comment on an individual’s care due to privacy concerns but that it “has covered medically necessary testing and treatment for COVID-19 and we continue to work closely with our members and providers to ensure the best care possible.”

Medical standards for long Covid are still developing. Congress designated $1.15 billion over four years to study the prolonged health consequences of Covid-19, and the CDC released interim guidelines in June to help doctors diagnose and treat them. That guidance tells physicians to “advise patients that post-COVID conditions are not yet well understood, and assure them that support will continue to be provided as new information emerges.”

Professional groups like the American Medical Association typically have their own treatment guidelines for some conditions, but insurers often use their own, said Elizabeth Green, a partner at Kantor & Kantor LLP, which represents people who have had insurance claims denied.

Courts have found these insurer policies don’t always reflect the appropriate standard of care, she said.

In one such example, United Behavioral Health was ordered by a federal judge in California to reprocess some 67,000 claims for mental health treatments. The court found in 2019 that the insurer used flawed coverage guidelines that were more restrictive than generally accepted standards of care to deny claims. United Behavioral Health has appealed that decision.

But without coverage limits, some argue insurers and self-funded plans could be hurt financially.

“It would be very difficult to say you have to follow the recommendations of the doctor in all cases because that would just bankrupt the system,” said Joshua Bachrach, a partner at Wilson Elser Moskowitz Edelman & Dicker LLP in Philadelphia, who represents insurance providers in claim disputes. “I don’t think plans are looking to find ways to deny claims.”

America’s Health Insurance Plans (AHIP), an advocacy and trade association for insurers, acknowledged in a statement that long-term Covid isn’t clearly defined or well-understood. It said companies will help patients get the testing and treatment they need.

“If a clinician providing care has a difference of opinion with an insurance provider, they can have a dialogue with a fellow clinician at the insurance provider to provide more information about the patient’s condition and the recommended treatment,” David Allen, an AHIP spokesperson, said in the statement.

Green expects to see some long hauler lawsuits over insurance claims in the future but hasn’t encountered one yet.

“There’s probably a delay because the term ‘long hauler’ is only probably, what, six months old at the most?” she said. “This is all new to everybody.”

One roadblock to coverage is that there are no specific diagnostic codes for some long-haul symptoms, making it difficult for doctors to bill insurance for tests and treatments. Some conditions like depression are easy to diagnose, but others are more complicated.

“It forces providers to think, ‘How do we characterize these people?’ and sometimes it’s not clear,” said Dr. Jim Jackson, director of behavioral health at the ICU Recovery Center at Vanderbilt University Medical Center.

Jackson, who leads a support group for Covid-19 long haulers that Sedor is part of, has encountered this when trying to order cognitive rehabilitation for long-Covid patients. Insurers tell him, “We only will support cognitive rehab in people who’ve had a brain injury, and where’s the brain injury?” he said.

A committee responsible for approving changes to diagnostic codes is meeting Sept. 14 and 15, and it’s AHIP’s understanding that post-Covid codes will be discussed and officially implemented following that meeting, Allen said. The committee includes representatives from the Centers for Medicare & Medicaid Services, the CDC, and the National Center for Health Statistics.

Until then, health law scholars say, doctors’ clinical judgment will be the best evidence for how to treat Covid-related conditions.

“What insurers probably will not do is simply honor every medical judgment that this is a Covid-related condition. And then separately, you run up against treatment limits in your plan,” said Sara Rosenbaum, a health law professor at George Washington University.

While states can require insurers in individual and group markets to make coverage exceptions for Covid-related care, they have no regulatory authority over self-insured employer plans that most people have. Any exception to coverage limits would require an act of Congress. New York said it got one complaint from a Covid-19 long hauler who had a claim denied, but other states hit hard by the virus have not received any complaints.

Cullen hasn’t gotten a bill yet for Alex’s hospital stay or anything further from the insurance company other than the initial notice that the claim is being denied. She is planning to file an appeal but doesn’t know what it will ultimately cost. She’s afraid to ask.

“I know the blood work is usually about $1,500 a pop when he’s doing it outpatient,” she said. “Without insurance, that’s what they bill.”

Alex is now back in day care despite the fevers. His doctors deemed it safe for him to return since he’s no longer testing positive for or transmitting coronavirus. Cullen still didn’t want to send him, not with the delta variant surging.

“I’m concerned about how his body is handling his infection and what it’s going to mean for other infections,” she said.

“Nobody has any answers.”