Laura Marston, 34, holds up a vial of Humalog, a type of insulin she takes for type 1 diabetes at her home in Washington, D.C., Sept. 27, 2016. When she was first diagnosed at 14, the list price for the drug was $21 per vial. Twenty years after its introduction, Humalog's list price is more than $250 for a vial.
Jorge Ribas/The Washington Post via Getty Images

Insulin companies are headed to Capitol Hill April 10 where they’re expected to answer for massive price increases in products that have largely stayed the same for over a decade.

They’ll be joined by the drug middlemen that arrange patients’ coverage options. Those middlemen are also to blame for increased prices, observers say, because the opacity of the whole U.S. drug supply chain allows entities to line their pockets with few consequences.

Insulin prices doubled between 2012 and 2016, according to the Health Care Cost Institute. And although the insulin most commonly used today isn’t the same as the insulin scientists originally discovered 100 years ago, there’s debate over whether insulin’s improvements are worth their new sticker prices.

“There hasn’t been any real major change in insulin in the last 10 years or more besides playing around with some elements of it,” said Christopher Rutty, a medical historian who focuses on insulin. He pushes back on the idea that newer is inherently better. “It obscures the fact that the insulin made in the 80s would be just as good for the average diabetic today,” he said.

Lawmakers are using insulin as their primary window into potentially unmerited drug price increases. It’s unique from other drugs in both its regulatory status and its necessity for people who take it. Here are some of the main pressure points in the national conversation surrounding insulin and its cost.

“People can’t survive without insulin,” LaShawn McIver, vice president of government affairs and advocacy at the American Diabetes Association, said. About 7.4 million people are insulin-dependent, she said. And as instances of diabetes and pre-diabetes increase, “we’re going to see this issue get worse,” she said, referring to insulin access. In the past year alone, 39 percent of people surveyed by the ADA said they experienced increased insulin costs. Some patients have reported rationing their insulin as a result of the cost increases.

The ADA estimates diabetes cost the U.S. economy $327 billion in 2017, including $237 billion in direct medical costs and $90 billion in reduced productivity.

Drug companies obviously have a large financial stake in insulin prices as well. A significant portion of each of the three insulin-producing companies’ revenues is based on insulin products—especially for Novo Nordisk. A little more than half of its self-reported revenue in 2018 came from insulin products, according to Bloomberg Terminal data. 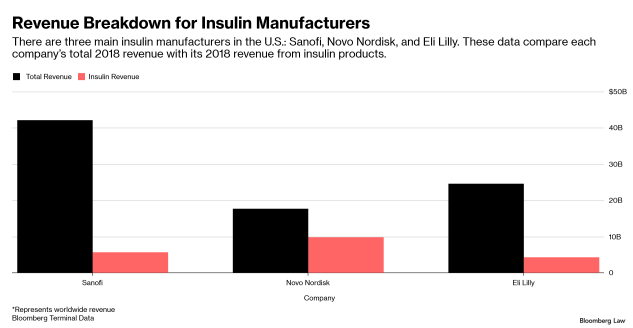 It’s hard to know exactly how much of a hit companies would take from lower insulin list prices. That’s because the opacity in the drug supply chain makes it impossible to know how much money is flowing toward rebates or other price concessions, Robert Lash, a physician on staff at the Endocrine Society, said. “I’m guessing it’ll be a substantial difference in their bottom line,” he said.

When Did Cost Become an Issue?

There are five types of insulin: rapid-acting, regular, intermediate-acting, long-acting, and ultra-long acting. Doctors decide which is best used for patients on an individual basis.

Insulin prices remained relatively steady from the 1920s through the 1960s, according to medical historian Rutty. It wasn’t until the 1970s when insulin-makers started to feel a pinch in manufacturing costs. Up until that point the drug had been made from animal pancreas tissue, but as general inflation rose rapidly and there was more competition for animal products, manufacturers discovered how to create insulin without that tissue, for example by using bacteria genetically altered to produce the compound.

Then the price of insulin started to rise. Creating insulin without pancreas tissue “added in a whole new level of regulatory and scientific processes,” increasing production costs, Lash said.

In the early 2000s companies started coming out with long-lasting insulin, which is one of the most popular types of insulin now in use. They’re sold under the brand names of Novo Nordisk’s Levemir and Sanofi’s Lantus, which were approved in 2005 and 2000, respectively. Then prices increased substantially. The average list price of insulin almost tripled between 2002 and 2013, according to the ADA.

Why Isn’t There a ‘Generic’ Insulin?

Insulin’s been around for 100 years and its most basic forms are off patent, meaning theoretically any company can come in and produce it. But that hasn’t happened. Consequently, Sanofi, Novo Nordisk, and Eli Lilly control the entire insulin market in the U.S. Even what’s known as the “Walmart” brand of insulin that runs $25 a vial is produced by Novo Nordisk.

Broadly speaking, if there aren’t generics available for off-patent products it’s usually because the brand drugmaker has such a tight hold on the market it’s very difficult for generic companies to pierce. That’s partially what’s happening with insulin. But insulin’s regulatory classification is also a barrier to cheaper versions, Lash said.

Right now insulin is regulated as a drug, not a biologic. Biologics are complex drugs made from living cells and are harder to copy than traditional small-molecule products that fall under the FDA’s “drug” category. So insulin is in a regulatory limbo of sorts. An impending 2020 deadline would reclassify insulin as a biologic and potentially make it easier for competitors to develop cheaper versions.

In the meantime, access to cheaper versions of insulin should be among lawmakers’ questions April 10, Lash and Rutty said. Eli Lilly recently announced it would make its own generic insulin to help cash-strapped patients.

Lash said he doesn’t expect prices to drop significantly until other companies beyond the big three get involved in insulin production.