Even before a Covid-19 vaccine is ready, top health officials want to build public support for getting the shot, particularly among Black Americans who are more skeptical of the vaccine.

The U.S. needs nearly 230 million Americans to get the vaccine to ensure herd immunity, but public health officials worry that skepticism about the first vaccine for a new disease combined with historic racial inequities in health care may scare away people who would otherwise receive the shot.

“What scares me more than anything else is a third of Americans are afraid of taking a vaccine to prevent Covid-19,” Peter Marks, head of the office that regulates vaccines at the Food and Drug Administration, told industry groups early this month. “People should have the confidence that we’ve made sure what we’ve put out there will be safe, effective, high quality, and we’ll be monitoring to make sure it stays that way.”

For many parts of the country, Covid-19 has put life on pause. Businesses, churches, and schools are all struggling with whether to cautiously re-open or wait until there’s a vaccine available.

That’s why FDA leaders like Commissioner Stephen Hahn are already trying to build confidence in the public that any Covid-19 vaccine the FDA approves will be worth getting. The strategy revolves around promoting transparency—from the clinical trial process, to how the agency decides what vaccines to approve, to possible side effects.

Federal leaders are trying especially hard to understand what Black Americans—who are disproportionately affected by Covid-19 but who are also more hesitant compared with other groups—need to know to feel comfortable getting vaccinated.

“I want to assure your viewers that we won’t cut corners on this,” Hahn told Sen. Tim Scott (R-S.C.) in an Instagram Live video last week. “If you think it’s rushed or its not safe, I’m happy to address it by being transparent...so when a safe vaccine is authorized by FDA, people will be willing to take it.”

Roughly half of Black Americans say they’d “definitely” or “probably” get a coronavirus vaccine if one were available today, whereas the majority of White and Hispanic adults said they would get one, according to a June report by the Pew Research Center. 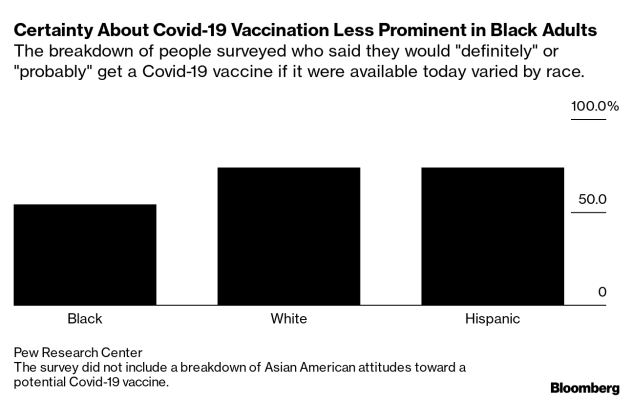 The FDA released a general outline in late June for what it wants to see in a Covid-19 vaccine applicant. The guidance encouraged racial diversity and inclusion of elderly people and pregnant women, but it didn’t mandate demographic breakdowns in trials or include specific targets.

While transparency is a step in the right direction, “it doesn’t go far enough,” according to Jonathan Jackson, director of the CARE Research Center at Massachusetts General Hospital, which focuses on inequities in medical research and works to boost diversity in clinical trials.

To build Covid-19 vaccine confidence with Black communities that have historically been mistreated by the medical community, health professionals have to include them in the work, he said.

“Transparency says I’m going to show you all my work. Empowerment says, why don’t you come help me with this,” which means bringing Black and Latinx voices into the clinical trial design process, including them in the manufacturing process, and bringing in local communities to “develop effective messaging encouraging people to get vaccinated,” he said.

There are almost 200 Covid-19 vaccines being developed right now, according to the Milken Institute’s vaccine and treatment tracker. But “right now we do not have the representation in trials to accurately represent the U.S,” Jackson said.

He suggests giving companies concrete diversity targets to meet during trials. Otherwise, “this is the clinical trial equivalent of ‘thoughts and prayers,’” he said.

Lax state vaccine laws and misinformation prompted a 2019 spike in the vaccine-preventable disease measles. In those cases, most people who decided not to vaccinate their children were either afraid of side effects or opted out for religious or philosophical reasons. Others felt that the government shouldn’t be able to require vaccinations.

Reluctance to take a potential Covid-19 vaccine likely comes from the unknowns about the vaccine because it would be new, Paul Offit, director of the Vaccine Education Center and an attending physician in the Division of Infectious Diseases at Children’s Hospital of Philadelphia, said. “You should be skeptical of anything that you put in your body,” he said.

For most people, whether or not they get vaccinated for Covid-19 will ultimately depend on how good the vaccine is, he said. The FDA said it is looking for a vaccine that’s at least 50% effective, but people will also be hesitant to take something that has serious side effects, he said.

“The critical thing about this vaccine will be to manage expectations and be honest about the limitations about data we have on hand,” he said.

The public’s confidence in scientists “to act in the best interests of the public” went up from 35% before the outbreak to 43% in April, according to the Pew Research Center. But that overall rise in confidence is driven by Democrats, according to Cary Funk, one of the authors of the report.

“That was striking because most other groups and institutions didn’t see that rise over such a short period,” she said. “What we ended up seeing is the rise wasn’t consistent across the board. It rose among Democrats, and among Republicans the confidence remained steady.”

Health officials will have to tap into that confidence when persuading people to get vaccinated, vaccine specialists said.

But it’s not clear whether that confidence is holding up after the federal government’s inconsistent messaging on the virus. Allowing faulty antibody tests to hit the market and pushing hydroxychloroquine as a Covid-19 treatment before the science was clear could damage trust in an eventual vaccine.

“The public is seeing how messy science can be for the first time, although this is something that is very well known for people who are entrenched in science,” Jackson said. That messiness, combined with the erratic federal response to Covid-19 is likely behind some of the hesitancy people are feeling, he said.

“But what we’re seeing with Covid-19 is there are many many nuanced reasons to play into an overall reluctance to be vaccinated,” Jackson said. “There’s more going on here than what was going on with [a measles] vaccine.”