U.S. coronavirus deaths could reach as high as 200,000, National Institute of Allergy and Infectious Diseases Director said, a stark warning as debate rages about how soon to restart parts of the U.S. economy that have been on shutdown.

Separately, the American Enterprise Institute on Sunday released a “road map to reopening” the U.S. in distinct phases, from Dr. , the former head of the U.S. Food and Drug Administration who’s a resident fellow at the think tank. 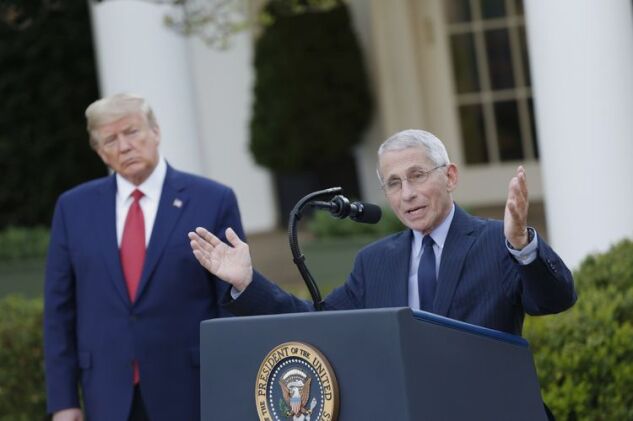 Anthony Fauci speaks during a Coronavirus Task Force news conference in the Rose Garden of the White House on March 29.
Photographer: Stefani Reynolds/CNP/Bloomberg

The U.S. has more than 125,000 confirmed infections with more than 2,100 deaths, according to the running total from Johns Hopkins University. A death toll anywhere near what Fauci described would dwarf those seen in China, the original site of the pandemic, or Italy, which has been the hardest-hit country in Europe.

“We are asking every single governor and every single mayor to prepare like New York is preparing now,” Dr , the White House coronavirus response coordinator, said on NBC’s “Meet the Press.”

Fauci said that measures like the travel advisory made Saturday to residents of the greater New York area “will ultimately help stop the virus.”

About 56% of all the new Covid-19 infections in the country are coming from that area at the moment, Fauci said.

President ’s decision to stop short of a quarantine for parts of New York, New Jersey and Connecticut came after discussions Saturday with the White House coronavirus task force, according to Fauci and Treasury Secretary , who spoke on Fox.

“The original proposal was to consider seriously an enforceable quarantine,” Fauci said. “After discussions with the president, we made it clear, and he agreed, that it would be much better to do what’s called a strong advisory.” The U.S. Centers for Disease Control and Prevention issued those guidelines late Saturday.

“What we’re trying to say to everyone is: when this virus comes to your metro area, please stay in your metro area where your care can be provided, because it’s spreading virus more quickly around the United States,” Birx said.

Gottlieb said he doesn’t expect states to be told by the White House to loosen restrictions this week but in the 16-page “road map” he co-authored with four others outlines ways to transition from “sweeping mitigation strategies” to new approaches.

The authors of the AEI report outline steps that can be taken as Covid-19 transmission is brought under control in different regions, specifying steps that the federal government should take working alongside the states and health-care partners, public and private.

“The epidemic is evolving rapidly, and our understanding of best responses will evolve as well,” the authors note.

A “sustained reduction in the number of daily cases” over 14 days would be a trigger for lifting some of the measures in specific places, Gottlieb said on CBS’s “Face the Nation.”

President ’s goal of getting the U.S. back on track by Easter Sunday, two weeks from now, seems like a non-starter.

“It is too early to lift these measures,” said Gottlieb, a special partner at New Enterprise Associates, a venture capital firm that invests in the health-care and biotech sectors. “It’s going to be a difficult April.”

To contact the reporters on this story:
in Washington at rkrasny1@bloomberg.net;
in New York at hwaller@bloomberg.net