A supervisor inspects prefilled syringes of a biosimilar of the arthritis treatment Adalimumab.
Photographer: Sam Panthaky/AFP via Getty Images

The Inflation Reduction Act will empower the government to negotiate drug prices for the first time starting in 2023. Biologics eligible for Medicare negotiation—a process that could take up to two years—must have been on the market for 11 years and not have a biosimilar version on its way to consumers.

Drugmakers may find themselves grappling with whether to subject their products to Medicare price negotiations or alter their patent strategies to let a biosimilar come on the market.

“We might not only see companies changing the patterns by which they enforce their patents and litigation, they might affirmatively engage in licensing to try to get some of these biosimilars on the market, rather than allow negotiation to occur,” said Rachel Sachs, a law professor at the University of Washington in St. Louis and scholar in FDA and health law.

The exemption in the law only requires the biosimilar to be available, but it doesn’t have to be interchangeable—meaning that it can be automatically switched with the reference biological product, similar to how generic drugs are routinely substituted for brand name pills.

“They might prefer non-interchangeable biosimilars to enter the market at a 20% or 30% discount, making them ineligible for negotiation, Sachs said.

“Because it’s not interchangeable, there would only be incomplete substitution for the biosimilar,” she said. “They might prefer that to a larger discount negotiated by CMS.”

Biologic drugs include AbbVie Inc.'s Humira, an anti-inflammatory drug for conditions like rheumatoid arthritis and Crohn’s disease, and Genentech Inc.'s Herceptin, which treats breast, stomach, and esophageal cancers. Biosimilars are lower-cost versions of biologics that closely imitate the originals.

There are nearly 40 approved biosimilars approved by the Food and Drug Administration, but only two products deemed interchangeable.

Even without interchangeability, biosimilars on average today cost half as much as the brand name product, Craig Burton, executive director of the Biosimilars Council, said. “They’re bringing savings. But the other thing they’re doing is the brands are reducing their price in order to compete and try to retain market share.”

AbbVie is anticipating a 45% erosion in US sales of Humira when biosimilars become available next year.

Some manufacturers might still find it in their best interest to allow or even enable biosimilar competition where it doesn’t currently exist, Sachs said.

There could also be “strong incentives” for the brand manufacturer to introduce its own biosimilar and “forestall negotiations through this channel,” Amitabh Chandra, director of health policy research at the Harvard Kennedy School of Government whose research focuses include innovation and pricing in the biopharmaceutical industry, said in an email.

Other drug pricing scholars say some companies will likely try to game the system, such as reaching deals with a generic manufacturer to allow a biosimilar to enter the market but not for an extended period of time. Or the companies could reach an agreement where the biosimilar company agrees not to sell their lower-cost alternative at all.

“They can kind of skirt the rules by having competition, but not real competition,” Stacie B. Dusetzina, an associate professor at Vanderbilt University whose work focuses on measuring and evaluating population-level use and costs of medications.

As the Centers for Medicare & Medicaid Services works out regulations to implement the drug pricing provisions, it will be important to identify where drug companies look for opportunities to skirt regulation, Dusetzina said.

“As we’re working through the rules to put this together, there could be more specificity,” such as clearly defining what generic competition means, Dusetzina said. “Do you have to have a certain market share for that generic, in which case, then the rules get around any gaming?” she said.

Makers of biosimilars have to conduct additional switching studies to meet the interchangeability standard to show a pharmacy that they can be switched out for the brand-name product without needing a health-care provider’s authorization. “It adds quite a bit of work to their process of getting their drug on the market,” Dusetzina said.

But biosimilars won’t need to meet those extra interchangeability requirements to get the brand-name drug out of government price negotiations.

Lawmakers likely didn’t require interchangeability as part of the exemption because it is such a new concept, and it’s such a new focus for biosimilar manufacturers, Dusetzina said. The US didn’t have a biosimilar pathway until 2010, and the FDA approved its first biosimilar five years later.

Burton, of the Biosimilars Council, said the ability of pharmacists to swap out brand-name drugs matters less in the biologics space than it does in the small molecule space. Physicians usually administer these complex biological therapies, or what’s known as “buy and bill,” so if the clinician wants to use the biosimilar, that’s the product that they purchase, stock, and administer.

“Most, if not all, manufacturers which would agree that in the buy and bill space, the interchangeability designation is irrelevant, because they don’t need it in order to get the adoption and get it to be used by the patient,” Burton said. The council is a division of the generic drug industry trade group, the Association of Accessible Medicines. 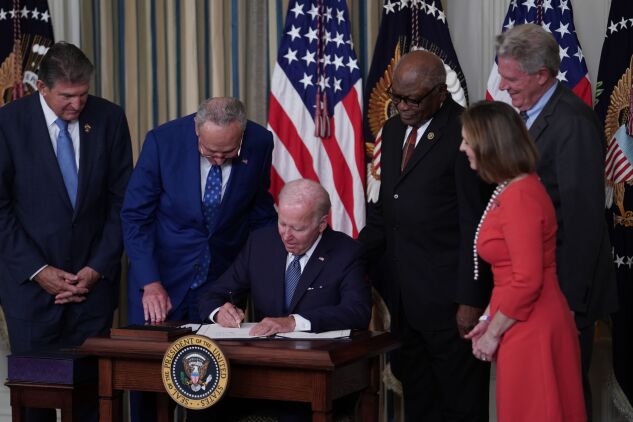 President Joe Biden signs the Inflation Reduction Act of 2022, in the State Dining Room of the White House in Washington, D.C., on Aug. 16, 2022.
Photographer: Sarah Silbiger/Bloomberg

Scientific advances could change the outlook by the time the price negotiations rules take effect, both Sachs and Chandra said.

“It’s also possible that by the time the law takes effect the FDA has approved more interchangeable biosimilars because it has a better sense of how to make such approvals, or because the biosimilar manufacturers have become better at demonstrating the interchangeability of their products,” Chandra said.

Part of the reason that insulin has an interchangable option is because that molecule is better understood scientifically, Sachs said.

“It just is the case that it’s harder to make interchangeable biosimilar versions of some of the more complex biologics. If that starts changing and if we start seeing more interchangeable—because of the science, not just because of the law or economic incentives—then we could certainly see sort of additional changes,” she said.

Overall, opening up the option for negotiation in the Medicare program is really an important advance that will improve access for people who need expensive drugs and provide better financial security for Medicare beneficiaries,” Dusetzina said.

“This is a complete win for consumers,” she said. “How well this will work will depend on the details. But I think that it gives us a great start.”