Reopening enrollment in the federal Obamacare exchange is one of the first steps President-elect Joe Biden can take to fulfill his pledge to shore up the landmark health-care law, policy experts say.

“He can just say it’s an emergency, and he can just do it” without going through a lengthy regulatory process, Karen Pollitz, a senior fellow with the Kaiser Family Foundation, said.

Broadly reopening enrollment in the HealthCare.gov marketplace would make it easier for millions to obtain vital health care. “Particularly during a pandemic, it’s good if people can get coverage—at least so they can get free testing and free vaccines,” Pollitz said.

About 28 million Americans don’t have health insurance, Joshua Peck, a former Obama administration official and a co-founder of Get America Covered, said in a recent telephone press briefing. Get America Covered is a group that works to help people obtain health coverage.

Still, about 485,000 people used the special enrollment period provisions to obtain health coverage through May, a 52% increase compared with the same period during the prior year, according to a June report by the Center for Consumer Information Insurance Oversight, which operates the federal exchange.

Open enrollment for 2021 on HealthCare.gov is scheduled to end Dec. 15. Close to 2.4 million people in the 36 states using the exchange had signed up for coverage through Nov. 21, according to the Centers for Medicare & Medicaid Services.

Meanwhile, 10 of the states that operate their own exchanges have scheduled open enrollment periods that extend beyond Dec. 15, according to Get America Covered. 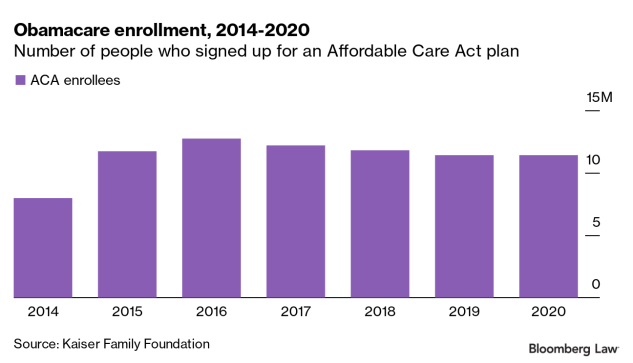 Even though the normal open enrollment period will be over when Biden takes office Jan. 20, the new president could still reopen HealthCare.gov, Pollitz said.

“I would expect that that’s something that he would probably do early on,” she said.

Over the summer, the Department of Health and Human Services made it easier for people who lost job-based coverage since the start of the year to sign up through HealthCare.gov outside of the normal enrollment period. But people who were uninsured before the pandemic aren’t included in the change.

Biden may consider extending the HealthCare.gov open enrollment period for future years, which would enable more people to sign up, Pollitz said. The Trump administration cut it to 45 days from 90 days.

There are other steps the new administration can take to bolster Obamacare, including removing barriers to special enrollments, Pollitz said.

“Those have dropped off dramatically under Trump, because they really raised the standards for SEPs and made it much harder for people to use those.”

The Trump administration moved in 2017 to limit mid-year enrollments in the federal marketplace by requiring consumers to document their eligibility for special enrollment periods, according to the Kaiser Family Foundation. The number of people who signed up for coverage using HealthCare.gov outside the open enrollment period fell from 1.6 million in 2015 to 800,000 by 2019.

Navigator funding was $63 million for HealthCare.gov in 2016 under the Obama administration. But the Trump administration cut it to $10 million.