President Joe Biden will revive his moonshot initiative to expedite progress on cancer treatments and prevention and detection capabilities, bringing back a signature program he led in his final year as vice president.

The 2016 cancer moonshot aimed to “end cancer as we know it” as Biden would often say, by focusing on advancing scientific discovery, improving collaboration and data sharing and setting up a number of public-private partnerships. The new moonshot will focus on reducing the disease’s death rate by at least 50% in the next 25 years.

“A lot has changed that makes it possible to set really ambitious goals right now,” a senior administration official said at a press briefing for reporters. The mRNA technology used to develop coronavirus vaccines could also stop cancer cells from growing.

The death rate from cancer has fallen by 25% in the last two decades thanks to prevention and new treatments.

Ending cancer as we know it has remained a top priority for Biden since his last tour in the White House. After the end of the President Barack Obama’s presidency, he and his wife, Jill Biden, set up a now-suspended Biden Cancer Initiative and held a cancer summit in 2018.

The commitment to improving cancer outcomes was one of the reasons Biden decided to run president, he said at a White House event Wednesday. “Now that I am president, this is a presidential White House priority—period.”

The latest initiative will “supercharge” the cancer moonshot as as a central effort of the Biden-Harris administration, the president said.

“It is bold. It’s ambitious. and it’s completely doable” Biden said. “Just as we harnessed the science to develop cutting edge Covid-19 vaccines and treatments, we’ll bring a fierce sense of urgency to fight against cancer.”

The latest effort to reignite the cancer moonshot signals “that now is the time to take a bold new step to transform cancer research and care. A recommitment to the moonshot principles, partnerships, and resources will build on the previous accomplishments and continue to accelerate progress,” Ellen V. Sigal chairperson and founder of Friends of Cancer Research, said in an email.

The announcement comes as money to fund the moonshot effort will hit a funding cliff in the next year and a half, leaving more than 240 research projects without money to continue that work. The 2016 biomedical innovation law 21st Century Cures () made $1.8 billion available over seven years through a special innovation fund, but that money runs out at the end of September 2023.

The White House official didn’t specify where funding for the moonshot initiative would come from but said the administration is “very confident there is robust support for it.” Biden is expected to release his proposed budget around the time of his State of the Union speech to Congress March 1. 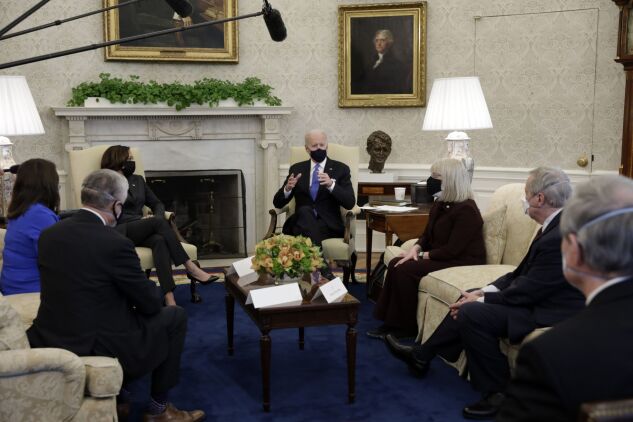 U.S. President Joe Biden, center, wears a protective mask while speaking during a meeting with a group of bipartisan lawmakers in the Oval Office of White House in Washington, D.C., U.S., on Wednesday, March 3, 2021.
Photographer: Yuri Gripas/Abaca/Bloomberg

A cancer moonshot progress report published last year by the National Cancer Institute found the initiative has made strides in a number of areas such as improving immunotherapy, advancing childhood cancer research, and better engagement with patients.

The initial cancer moonshot put in motion foundational changes, Sigal said. “These types of projects have instigated notable progress already, but now isn’t the time to take the foot off the accelerator,” she said.

“The original moonshot demonstrated that it was possible to compress a decade’s worth of progress into a few short years. We can’t afford to not make that opportunity a reality again.”

Cancer remains one of the leading causes of death worldwide, with 18.1 million new cases and 9.5 million cancer-related deaths. The NCI, part of the National Institutes of Health, projects that the number of cases will rise to 29.5 million and 16.4 million deaths by 2040.

“Cancer changes everyone it touches and in some ways it touches us all. For me and Joe, it has stolen our joy. It left us broken in our grief,” Jill Biden said Wednesday at the White House event. “A cancer diagnosis today may still leave us feeling hopeless. But we are not hopeless ,and we are not helpless. We are living in a golden age of research and discovery.”

The cancer death rate in the U.S. continues to go down since peaking in 1992, primarily due to drops in common cancers such a lung, breast, and prostate cancer, according to the American Cancer Society.

“Death rates for certain cancers are going down, and the technologies are emerging to accomplish that in many more. I hope this is the recommitment to make that goal a reality across all cancers,” Sigal said.

The president also made a commitment to:

(Updated to include comments from president and first lady.)

To contact the editor responsible for this story: at fjohnson@bloombergindustry.com