The retirement of longtime National Institutes of Health chief Francis S. Collins leaves the Biden administration with another health agency position to fill as the White House faces a looming deadline to find a permanent head of the FDA.

Collins, who has led the NIH since 2009, said Tuesday he plans to retire by the end of the year after nearly three decades at the agency. President Joe Biden is expected to pick an NIH director before Collins steps down, White House spokeswoman Karine Jean-Pierre said during a press briefing Tuesday. 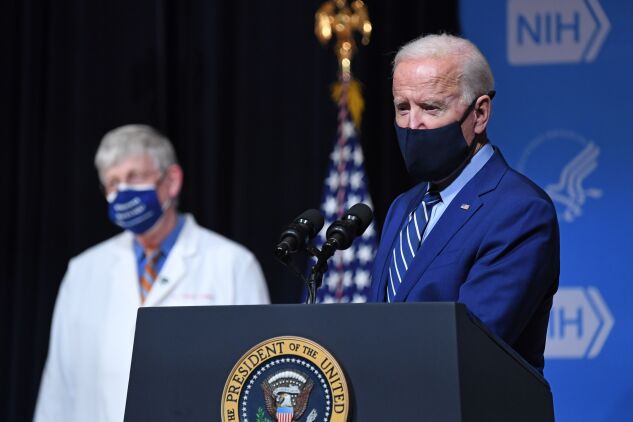 U.S. President Joe Biden speaks, with Dr. Francis Collins in the background, during a visit to the National Institutes of Health in Bethesda, Md., on Feb. 11, 2021.
Photo: Saul Loeb/AFP via Getty Images

“In the meantime the American people can rest assured that there is a strong leadership across NIH and the department managing the Covid-19 pandemic and more,” Jean-Pierre said.

But that leaves the White House on the hunt for two top health picks: Collins’s replacement and the president’s first nominee to run the Food and Drug Administration. Under the Vacancies Act, acting FDA Commissioner Janet Woodcock can’t serve past Nov. 15 unless Biden nominates someone to fill the job permanently. If there’s a nominee in place, Woodcock can continue to serve as the nominee moves through the confirmation process.

Leadership of both agencies will be critical in the coming months as the pandemic remains a top priority for the administration and the FDA must evaluate booster shots and vaccines in kids. Acting agency heads generally can’t start new initiatives or change the agency’s direction. The Biden administration also has plans for a sweeping $65 billion pandemic preparedness plan as well as a new entity at the NIH to develop biomedical breakthroughs.

The prospect of vacant roles at multiple federal health agencies is worrying lawmakers.

“In the face of the pandemic this is the wrong time to lack directors,” Sen. (R-N.C.), the top Republican on the committee that approves health nominees, said in an interview Tuesday.

Burr said he’s hopeful the White House will name a new NIH director and FDA commissioner and that the Senate will move swiftly to confirm them.

Rep. (D-Calif.), chair of the House Energy and Commerce Health Subcommittee, expressed concern about not having a permanent head of the FDA. “I don’t understand why in the midst of the deadliest pandemic in the nation’s history—we have now outstripped the number from the Spanish flu—we have an acting FDA commissioner,” she said. “It has an effect on all those people in those agencies.”

Jean-Pierre said next steps for the FDA role will be shared “soon” but that the agency has “strong acting leadership in place that is playing an important role in our Covid-19 response and beyond.”

“I need to think about putting the president in the best position to find the next director and to be able to do so in an organized thoughtful fashion,” Collins said in an interview Tuesday. He decided at the end of May to plan his departure for the end of the year and to give a few months’ notice to ease the transition. “This is not just because I had a bad day yesterday. “

Sen. (R-Mo.), the top Republican on the Senate panel that oversees NIH spending, said Collins deserves to step down when he’s ready.

“Dr. Collins has done a great job. He’s a good friend, but he’s served under three presidents, which no other director at NIH has ever done so,” Blunt said in an interview. “I don’t see any indication that somebody is rushing away from a job.” Blunt was one of several Republicans who asked President-elect Donald Trump in December 2016 to keep Collins on as NIH director.

Collins said he’s not worried about a looming gap in agency leadership, expressing confidence that an acting director will be identified to carry out everyday operations for a few months until the president names a director.

“When it comes to NIH, we have been blessedly free of the kind of partisan harangues that seem to affect almost everything else,” Collins said. “There are so many talented individuals out there that I think would see this as a fantastic opportunity that I don’t think the president will have trouble identifying a remarkably gifted, visionary NIH director.”

A female nominee would “be a great statement at the time where we need to further highlight the need for diversity in our workforce,” he added.

Furthermore, the NIH primarily operates through its 27 institutes and centers, “and the leaders of those organizations are incredibly strong right now,” Collins said. One of those directors is Anthony S. Fauci, who turned down the nomination of NIH director under previous administrations because of the importance of his work as director of the National Institute of Allergy and Infectious Diseases.

Sen. (D-Wash.), who’s chair both of the Senate Health, Education, Labor, and Pensions Committee and the Health Appropriations Subcommittee, also expressed confidence in finding a solid replacement. “There’s a lot of really great people who work at NIH. I’ll miss Dr. Collins, obviously, but I’m sure the administration will find somebody very competent.”

In the short-term, Collins will continue to advise and there are distinguished, proven leaders within the NIH who are equipped to fill the void until a new director is in place, Ellie Dehoney, vice president of policy and advocacy for Research!America, said. “The biggest concern is how any Administration could possibly fill the shoes of such an extraordinarily effective leader and advocate,” Dehoney wrote in an email.

Dehoney said she’s confident that the administration and Congress can successfully agree on solid leaders for both the NIH and the FDA. “The biggest obstacle is the plethora of other priorities confronting the Administration and Senate,” she said.

—With assistance from Shira Stein